Our best year ever! 2021 Wins and Highlights 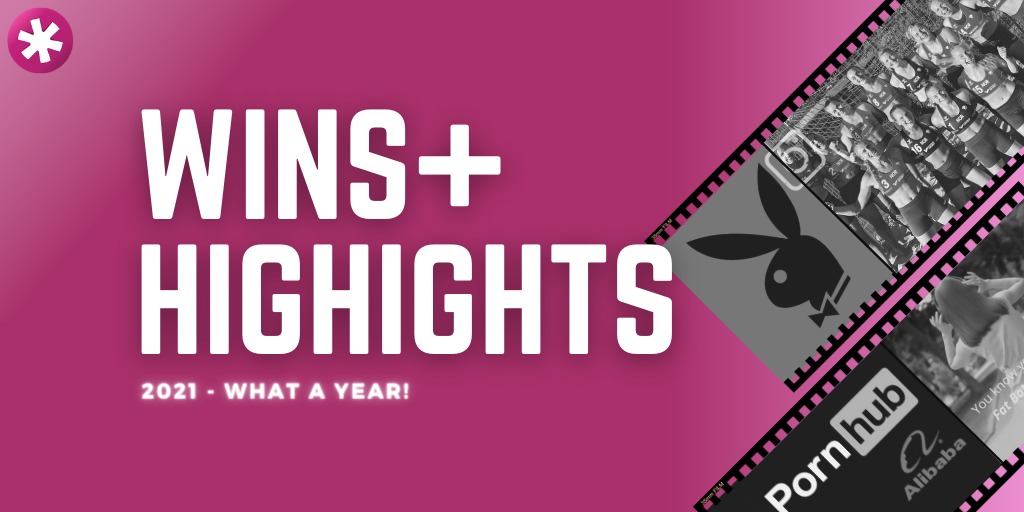 What a year! Despite the multiple challenges caused in another COVID-ravaged year, 2021 saw  us achieve a record number of wins - seven of them global!

The International Handball Federation scrapped its sexist bikini rule following global condemnation after the Norwegian women’s team was fined for “inappropriate clothing” after wearing bike shorts instead of bikini bottoms during a competition in Spain.  Talitha Stone - a young Aussie woman now living in Norway - launched her #letthemwearshorts petition with our backing, attracting more than  61,000 signatures. Gymnastics NSW also announced its gymnasts would be permitted to wear shorts over their leotards. This was a great win for sports-loving women everywhere. 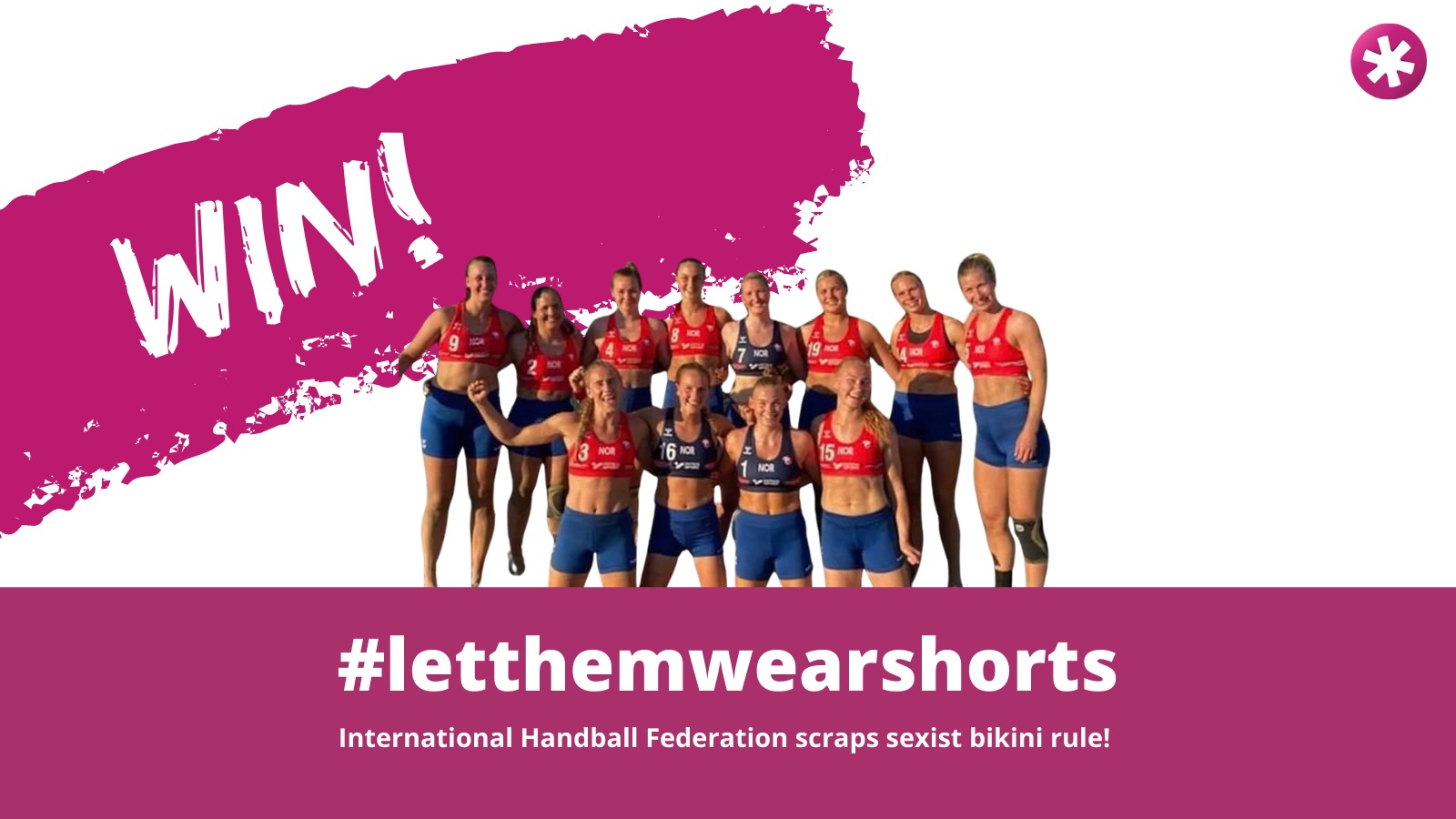 After removing child sex abuse dolls from sale last year, global e-commerce platform Alibaba went even further, geoblocking sales of all sex dolls to Australia and the US. 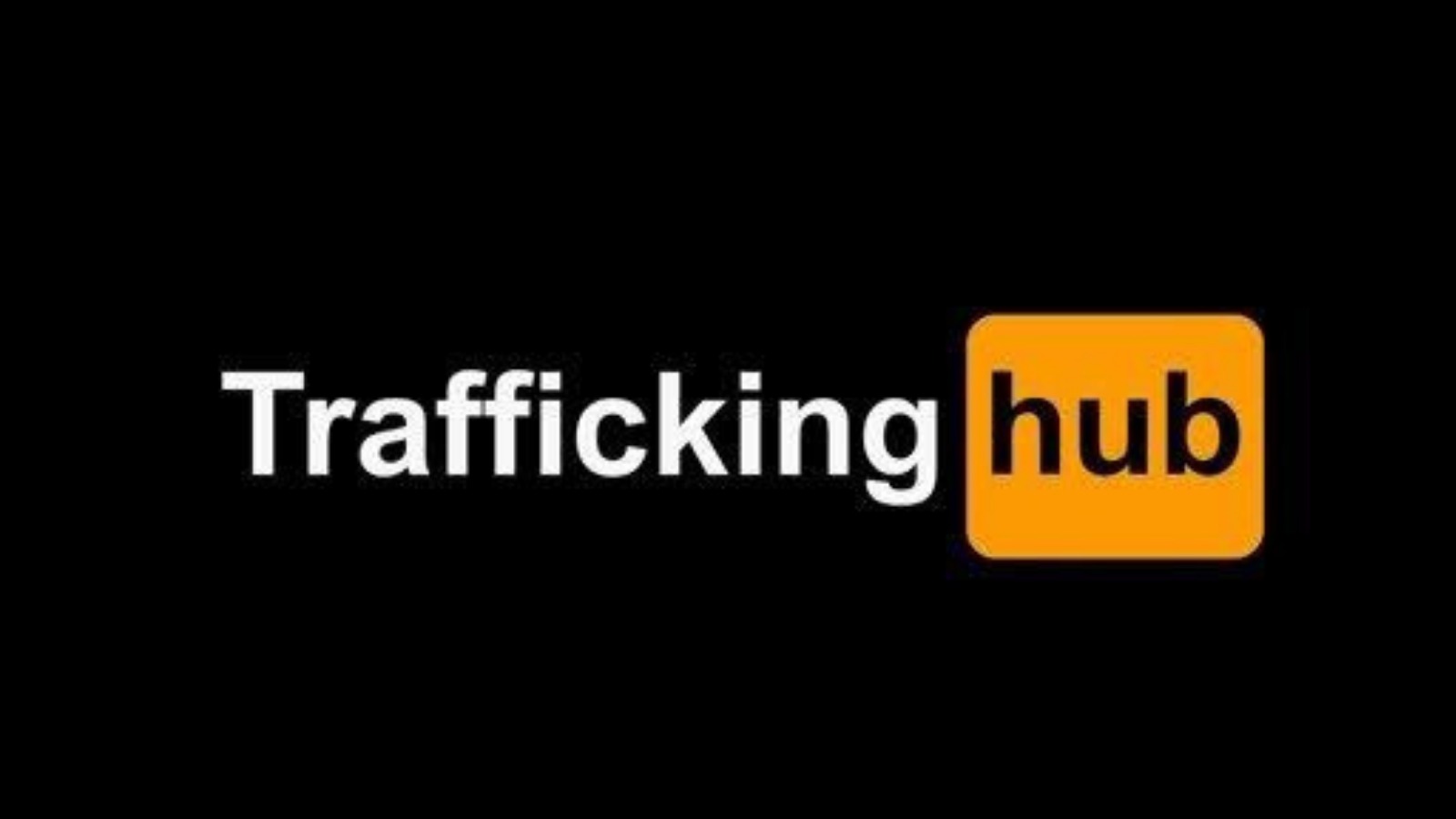 We are now backing a class action against Mindgeek filed by our partners at the National Center on Sexual Exploitation (NCOSE) Law Centre on behalf of survivors.

Instagram rolled out new safety measures for teens including default privacy settings for under 16s, blocking suspicious accounts from finding teens and restricting Direct Messages between teens and adults they don’t follow and prompting teens to set their accounts to ‘private'.  New parental controls will be rolled out in March 2022.

Facebook parent company Meta announced it was delaying rollout of end-to-end encryption across messaging platforms until at least 2023. We were signatories to a joint letter with global partners calling on Meta chief Mark Zuckerberg not to go ahead with the plan. Authorities estimate 70 percent of child sex abuse material would go undetected if encrption went eahd on the platform.

Our team reported hundreds of Instagram and dozens of Twitter accounts to the National Centre on Missing and Exploited Children (NCMEC) for sexualisation, exploitation and/or predatory activity. Many were removed.

We also took part in meetings with Instagram executives and campaign partners in which we pressed for more changes. MTR and our campaigner Lyn Swanson Kennedy were invited to join a private briefing of Federal MPs by former Facebook employee and whistle blower Frances Haugen.

In our most recent win, Junee Licorice and Chocolate Factory pulled its sexist and objectifying ‘Bottle of Boobs’ after supporters, including breast cancer survivors, condemned the product.

South Australia and Western Australia enacted legislation to deregister Wicked Camper vehicles where Ad Standards upheld complaints against them for sexist slogans. This follows our decade-long campaign which resulted in state transport ministers agreeing to uniform legislation to de-register vans carrying anti-women slogans where the company failed to comply with an Ad Standards ruling.

Playboy-owned sex store Honey Birdette was pressured to pull its choking advertising from the window fronts of two stores in NSW and QLD after supporters complained to centre management.

The ‘Perfect Pair’ ad, which featured beer glasses positioned to resemble women’s breasts, was pulled from a Perth venue after local supporters objected.

Objectifying ‘fat-bottomed-girls’ funeral ad was pulled after our protest.

Alcohol brand Wet P*ssy pulled its ad after a supporter made a complaint to Ad Standards.

Playboy ANZ was forced to remove false retailer listings from its website after we exposed them.

Following our successful Alibaba campaign (see earlier), we turned our attention to ecommerce platform Etsy. Fashion designer, singer-songwriter and mum of five girls, Anna Cordell, launched a petition calling on Etsy to stop selling child sex abuse dolls and incest and child abuse-themed merchandise after closing her own Etsy store in complaint. Her petition was approaching 56,000 signatures just before publishing! 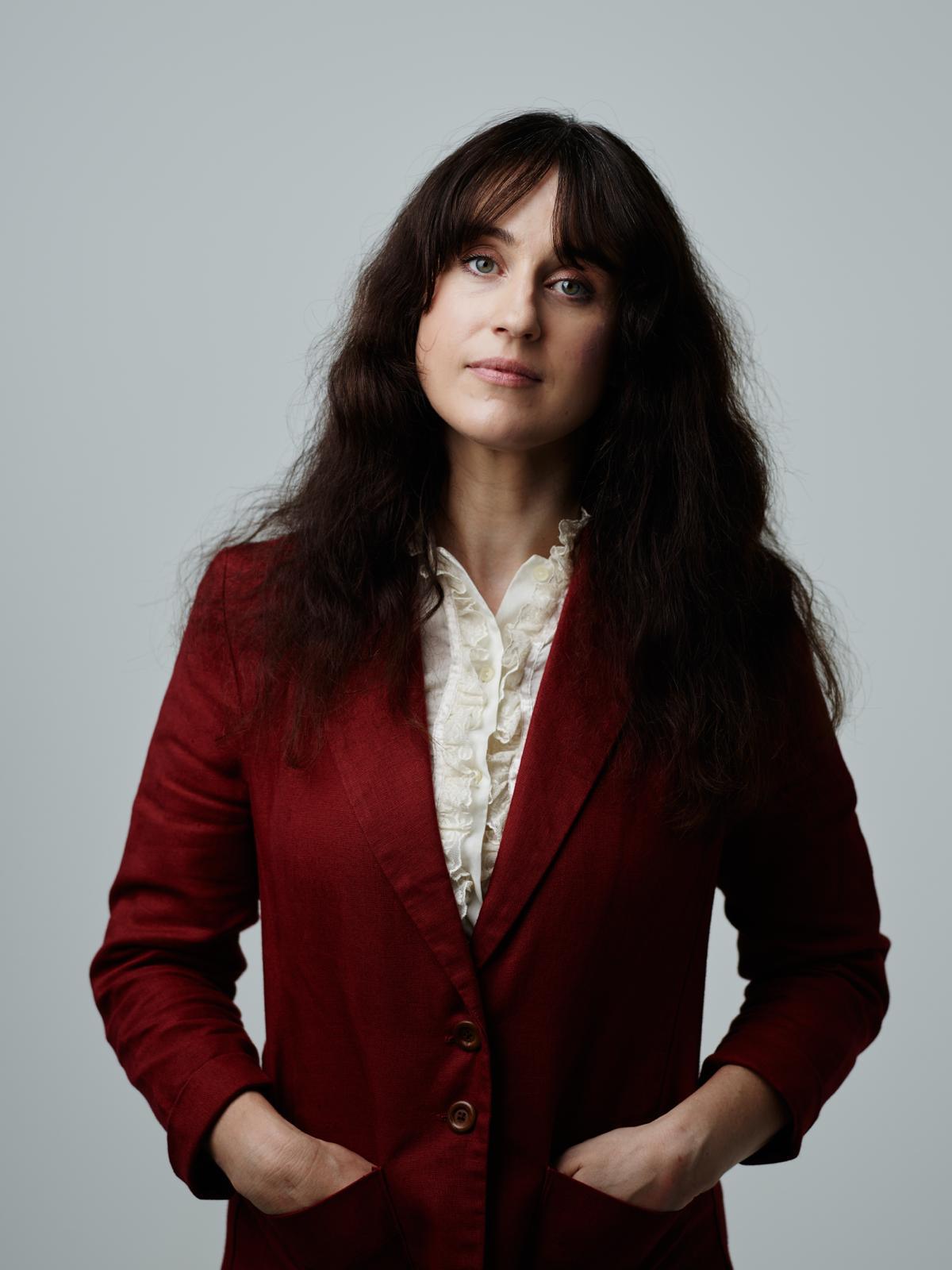 The sex store clocked up almost 60 advertising code of ethics violations for its porn-inspired shop front advertising. Ad Standards had upheld complaints against 57 individual Honey Birdette ads. (We continue to make multiple complaints to Ad Standards re this multiple offender).

We exposed a Lendlease shopping centre for hosting a children’s Santa parade which travelled directly past Honey Birdette’s BDSM-themed shopfront. 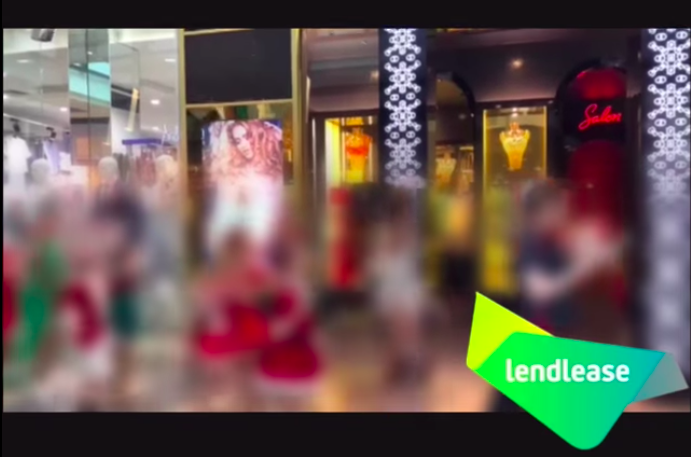 We exposed the so-called Champions of Change claiming to advocate gender equality in sports while hosting Honey Birdette porn-themed upskirting tennis ads in their shopping centres.

We also continued to put pressure on so-called ‘ethical’ superannuation investment companies for propping up the property groups which are Playboy-owned Honey Birdette’s landlords facilitating harm to all women and girls. Only two of the 15 companies have taken action and a third says it will (we will update our ‘Super Sexploitation Scorecard’ in the New Year so you can know where your ethical super company stands!).

#HoneyBirdetteMeToo - we amplified the voices of ex Honey Birdette employees who alleged sexual harassment and abuse.

We provided evidence to parliamentary committees, government reviews and local councils on sex trade harms. MTR testified before a South Australian parliamentary committee on a bill that would lead to industry de-regulation and Caitlin addressed councils in Victoria on the harmful consequences to women and girls from legitimising the trade in women’s bodies.

We also published an open letter from sex trade survivors excluded from giving evidence in the  Victorian Government review, who condemned the lack of proper process.

We’ve also joined forces with our friends at Coalition Against Trafficking in Women (CATWA) on a research project examining how mainstream media normalised and promoted the sex industry during the Covid 19 pandemic. The report is due to be released on International Women’s Day in March.

Daniel joins the team - a big year in schools ahead! 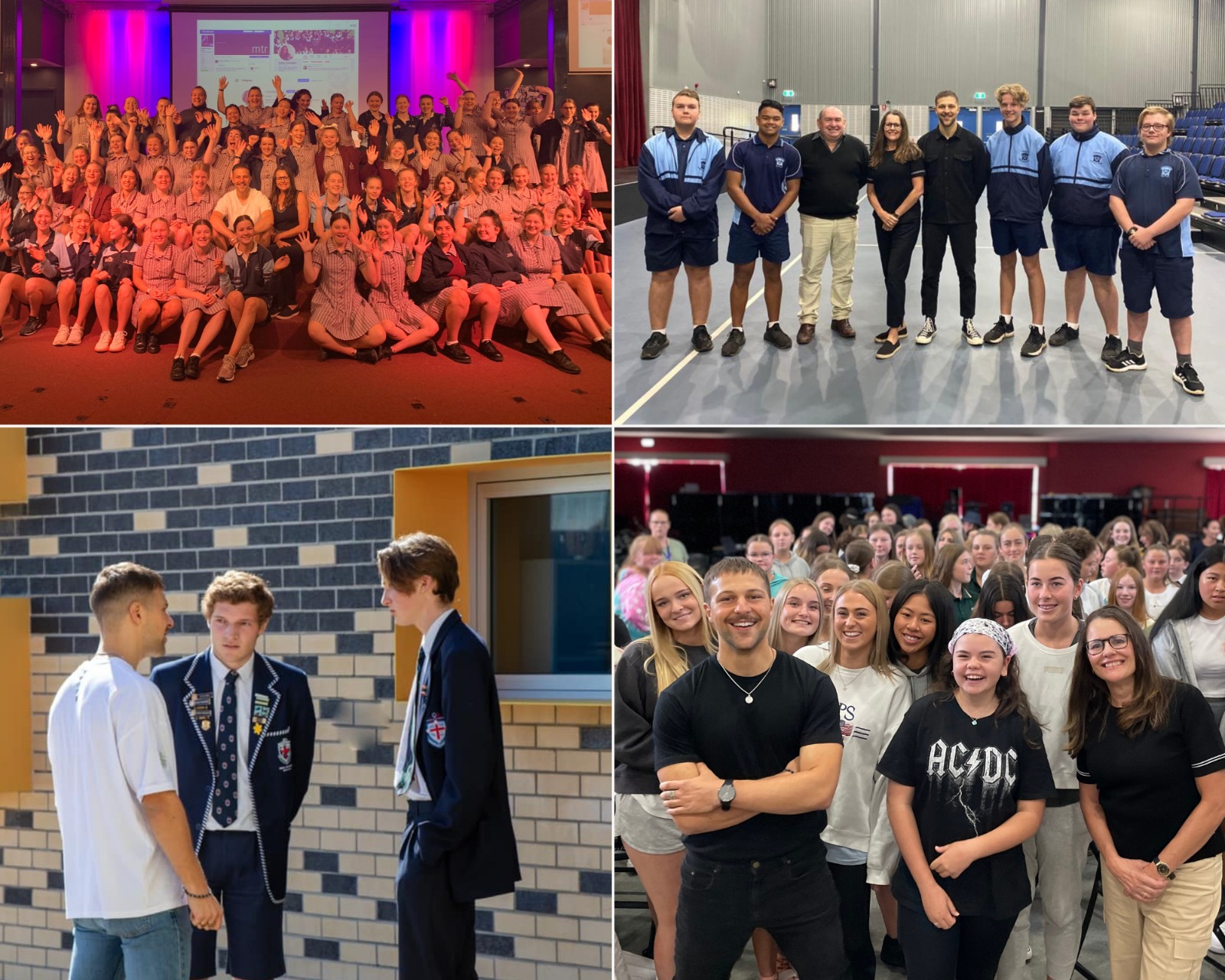 We held our first ‘Auction for Action’ to raise much needed funds for our fight against sexploitation.

We hosted our first online gathering with supporters nationally, to celebrate all our achievements over the past year and share our plans for the next one.

Melinda Tankard Reist was a guest on Studio 10 to discuss Playboy-owned sex store Honey Birdette eroticising violence against women with its choking ad.

The team participated in a number of podcasts and Facebook Lives, including MTR on the Ideas podcast, Caitlin on NCOSE’s End Sexploitation podcast, Daniel on radio 98.5 and Renee on ACCTV’s  ‘Be that’ women’s show. 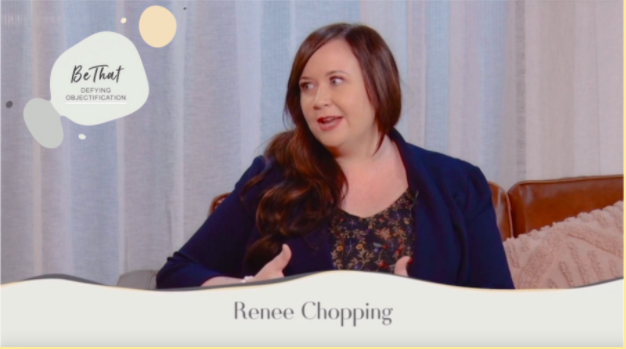 MTR and Caitlin research was cited  in a global report, titled #exposebigporn, published by our colleagues at CEASE UK.

​​We were very pleased to see significant follower growth across all our social media platforms, especially Instagram!

We grew our list of companies and small businesses who signed our CSR pledge not to objectify women and sexualise girls in products and services. Please support them!

Our pledge partners provide a positive counter to our annual black list of corporate offenders which don’t deserve your Christmas dollar. You can view the handy guide to help inform your shopping choices here.

And if you’d like to have your business included and promoted to our thousands of supporters, please sign the pledge here. 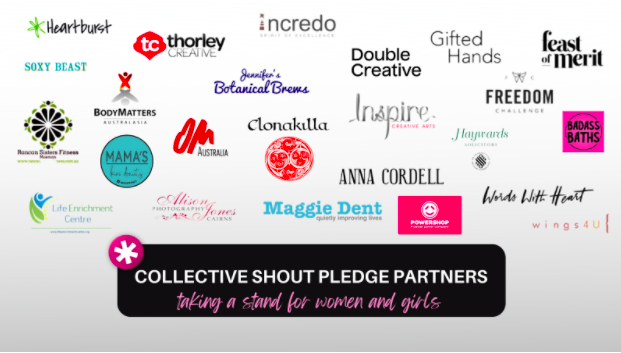 It is your support which makes these wins and highlights possible! We look forward to achieving more victories with you in 2022.