2) Zoo posted this image on their Facebook page and asked young fans which half they preferred- and why. 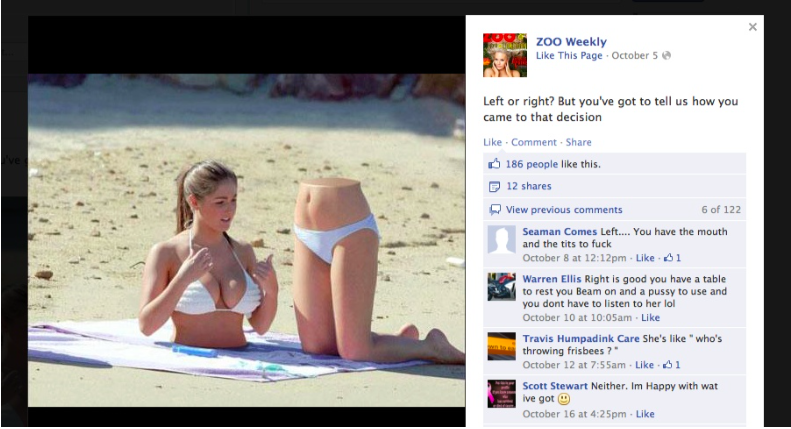 3) People can’t distinguish between the statements taken from lads mags like Zoo Weekly and statements from convicted rapists, according to a 2011 study.

4) Zoo gives young male readers tips on how to coerce women into sex, through isolation and using alcohol to compromise consent.

5) Zoo held a competition to find the ‘Hottest Asylum Seeker’, calling for refugee women who had fled from violence to strip off and send in their sexy pics.

6) Zoo sexed up Anzac day in their special commemorative edition featuring a model in a bikini describing her affection for "guys in uniform". 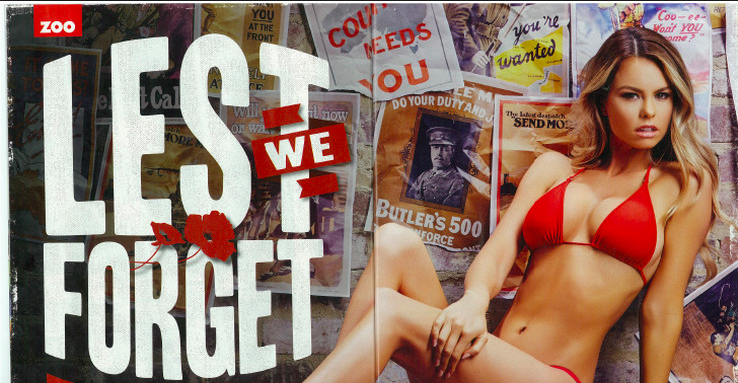 8) UK Zoo encouraged readers to cut their ex-girlfriend’s face “so nobody will want her” and to set women’s pubic hair on fire if they refused to undergo Brazilians. Read more.

9) Zoo brags about approaching young women in the street and convinces them to strip, uploading footage to their Youtube channel.

10) Zoo magazines feature ads for phonesex with pigtail-clad girls sold as “young but willing to learn everything”, “misbehaving girls all alone” and “unlimited access to young randy teens”.

13) Zoo exploited the homeless for a laugh.

14) Zoo photoshopped the head of Greens Senator Sarah Hanson-Young onto the body of one of their models when she declined to pose for them. 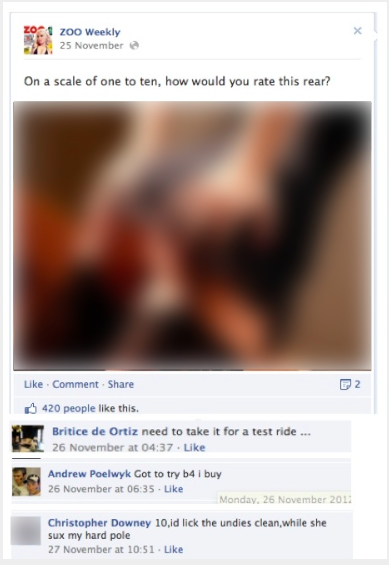 16) Zoo demeaned Australia’s first saint, Mary MacKillop, commemorated with a model in a habit and headline “Saint Mary Mac and Her Holy Rack” and presented on her knees ‘begging for it’.

18) Zoo mag advises men and boys on how to relate to women sexually by ‘taking charge like a real man’.

20) By sexualizing and objectifying women, Zoo contributes to mental health problems in young women and girls such as eating disorders, low self esteem, poor body image, anxiety and depression.

All this and more, available now at your local Coles or Woolworths supermarkets.

Coles and Woolworths, it’s time to decide what you value most highly- women, or profiting from all of the above.