28 years on, we remember the women murdered in the Montreal Massacre

The following is an excerpt from ‘”I Hate Feminists!” December 6, 1989, and its Aftermath’.

‘On December 6, 1989, at around 5 p.m., as the women engineers-to-be at the École Polytechnique were studying or writing their end of term examinations, Marc Lépine, a twenty-five- year- old man dressed in army fatigues, went up to the second floor of the school and entered a classroom occupied by about sixty students, female and male. He separated the class into two groups and told the men to leave. When he was alone with the women students, he proclaimed: “I hate feminists!” He fired. Marc Lépine left fourteen women dead and fourteen people wounded.

‘The Montreal police department had given the media a summary of his motives as expressed in the suicide note found on his body; with the note was a list of women and men he had been planning to murder, women who were pioneers in their fields (including the first woman firefighter and the first woman police officer) [and] well known feminists. 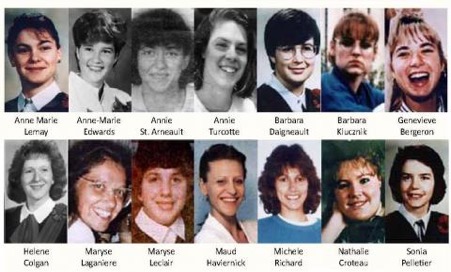 ‘[Some] pointed out that this violence was used to punish women who might decide to break out of the roles assigned to them on the basis of their sex. Denise Veilleux argued that “he didn’t choose just any women students. He decided to slay young women destined for a profession still practiced mainly by men.

‘“If this gesture is the act of a given individual, he was nonetheless following patriarchal society’s common law-order: that women have no place in public life. Threats of violence, or recourse to violence, weigh heavily on all women who dare to step out of the narrow limits of the family home, the conjugal hearth and acceptable feminine roles.”’

‘”I hate Feminists!” December 6, 1989, and its Aftermath’ by Mélissa Blaise. Available from Spinifex Press: http://www.spinifexpress.com.au/Bookstore/book/id=271/