“It's not empowering or uplifting, but rather just reinforcing negative stereotypes and negative attitudes towards women in the airline industry.” 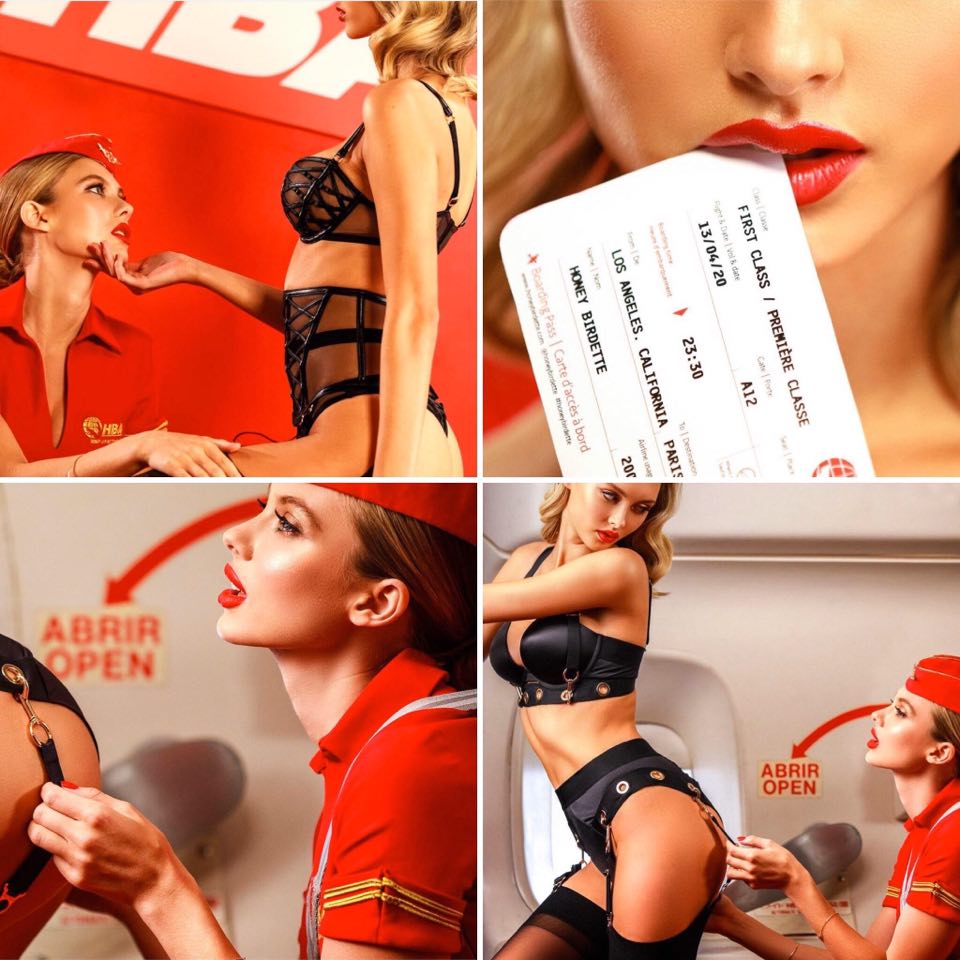 Honey Birdette’s sexist and sexualising representations of female cabin crew are particularly reckless and irresponsible given the rampant sexual harassment these women are known to endure.

Did Honey Birdette at any point consider how their sexist portrayals of female cabin crew as a porn-themed fantasy might put these women at risk?

A flight attendant speaks out

We were contacted by one of these women. Amanda has been a flight attendant for two years, in which time she has both witnessed and experienced frequent sexual harassment.

I've experienced drunk older men make crude comments towards me, suggesting they'd like to have sex with me. One drunk older man walked into the galley once where I was standing with 3 other flight attendants, he looked us up and down and told us, he'd “take us all at the same time.” Our female supervisor responded by saying, "They are just young women, sir." I always ignore it and remain professional.

We've found men filming us, without permission, which is illegal. When the supervisor asked one man to delete the images she saw he had zoomed up on female cabin crew's backsides as they walked through the aisle.

Another time a purser found a customer in business taking pictures of crew , she made him delete the images and saw that he had filmed videos of female crew, zoomed up on their backsides.

Amanda said it was common while helping male customers connect to the in-flight WIFI to find pornography on his browser, or to give one a drink and catch them flicking through nude images.

A few months ago I stood behind a passenger during boarding (unbeknown to him, I was behind him) and I watched him stare at images of young women posing in bikinis. He was zooming up on their breasts and on their ass. He was 50 or 60 and these girls could have been 16 or 18. That made me feel gross. 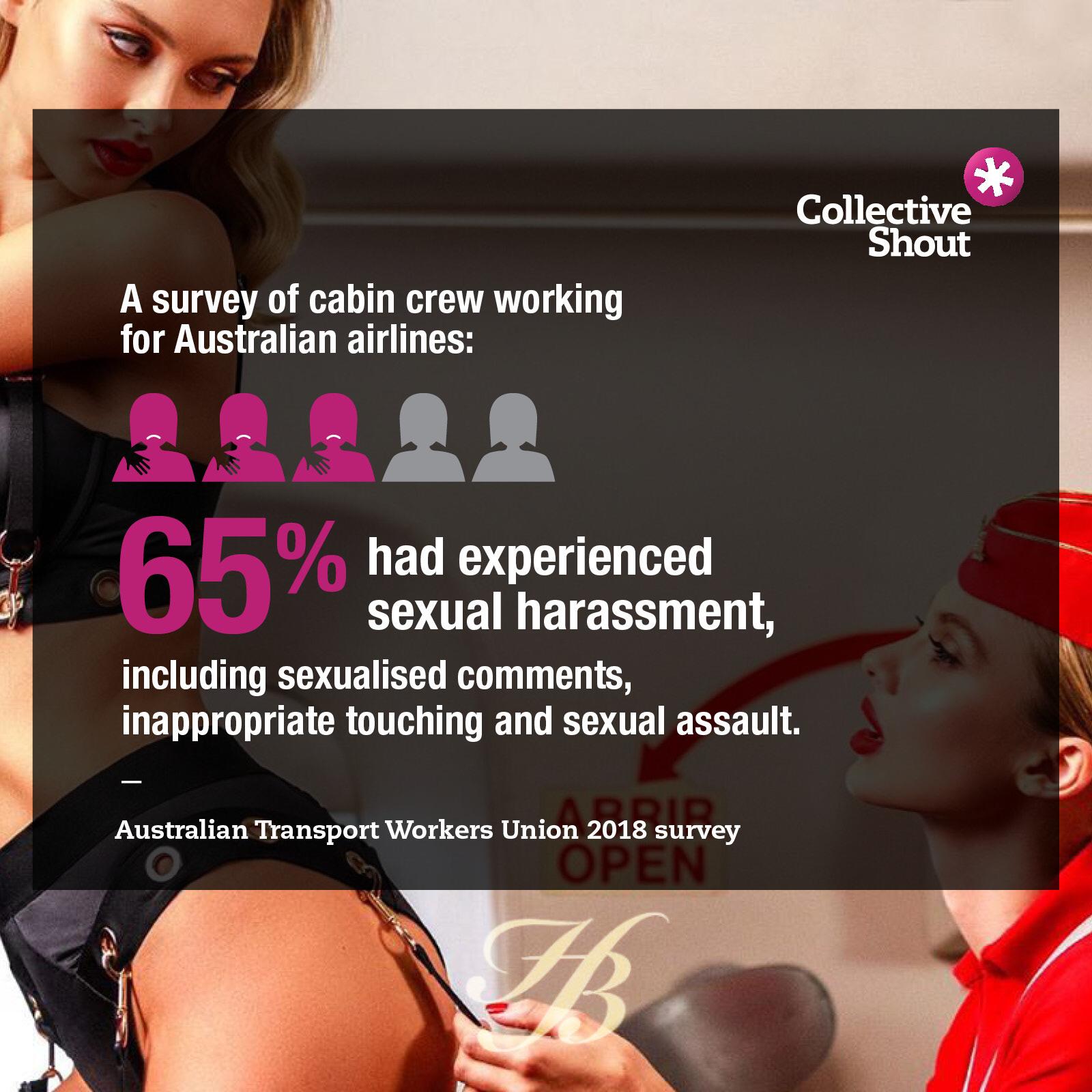 When Amanda saw the Honey Birdette ad campaign, she rolled her eyes.

Honey Birdette’s advertising reinforces the stereotype of hot female flight attendants. It makes me feel objectified. It's not empowering or uplifting, but rather just reinforcing negative stereotypes and negative attitudes towards women in the airline industry. It makes my job harder.

Yet again, it is clear that Honey Birdette’s claims of “empowering women” are utterly meaningless. Far from advancing the status of women or their promoting their wellbeing, Honey Birdette continues to objectify, demean and disempower women. Sexualising predatory behaviour towards women and encouraging sexual harassment, as they have done here, has real-world consequences for women’s lives. Honey Birdette puts women and girls at risk.

I don’t find the advertising at all empowering for women in their sexuality or their brain power even though one of them is a pilot! They are reduced to lust filled idiots vying and competing for the attention of the young sex goddess.

I guess personally I must be desensitised to the ‘sexy flight attendant’ story line they are trying to portray there as *yawn this is not new in my industry. Unfortunately I think previous generations paved the way for this perspective. It takes people like you to break that!

Isn’t it funny how if I had an opinion about that advertising (on social media) which was negative people would think that I must just be one of the old ugly crew or that I just need a root (yes I’ve been told that by a captain once).

It’s not portraying an adult, mature image of sexuality but, to me, is targeting teen girls (15-18 year olds). Giving an impression that you will be sexy like a 20-25 year old if you wear our product and behave like this.

To many young girls, there is a romanticism about flight attendants as that’s the career they want so it’s targeting them this way as well.

They are hoping it gets shared a couple of million times by being dirty with the hope that someone will remember their name and maybe later on get on their website to see what they have and purchase something.

Unfortunately, I think it is also trying to capture some of the teen music crowd as it’s basically a slightly dirtier music video clip. Shame!

I can’t imagine a woman wanting to buy their product through this advert nor can I imagine men wanting to buy it for their partner. To me, in no way is this selling lingerie, it's selling a sexual image to underage girls and that's just wrong.

I know just the people who would have a snigger and share this, but it will have nothing to do with women’s clothing.

*Names have been changed

UPDATE: See media coverage of this story below.

“Did Honey Birdette at any point consider how their sexist portrayals of female cabin crew as a porn-themed fantasy might put these women at risk? Do they care?” she asked.

“Honey Birdette claim to be all about empowering women, but they continue to objectify, demean and disempower women.”

Amanda claims there has been a 'long history of sexualising flight attendants' with the Honey Birdette ad campaign perpetuating this.

'Airlines have been known to have height, weight and age restrictions for flight crew and have required strict uniform standards for female flight attendants, including the requirement to wear high heels,' she wrote.