Despite R&B singer Chris Brown having brutally beaten pop star Rihanna in 2009, the pair appear to have resumed their relationship. Caitlin tells OK magazine that the emphasis needs to be on Chris Brown. He and other perpetrators of violent crime should be held accountable for their actions. 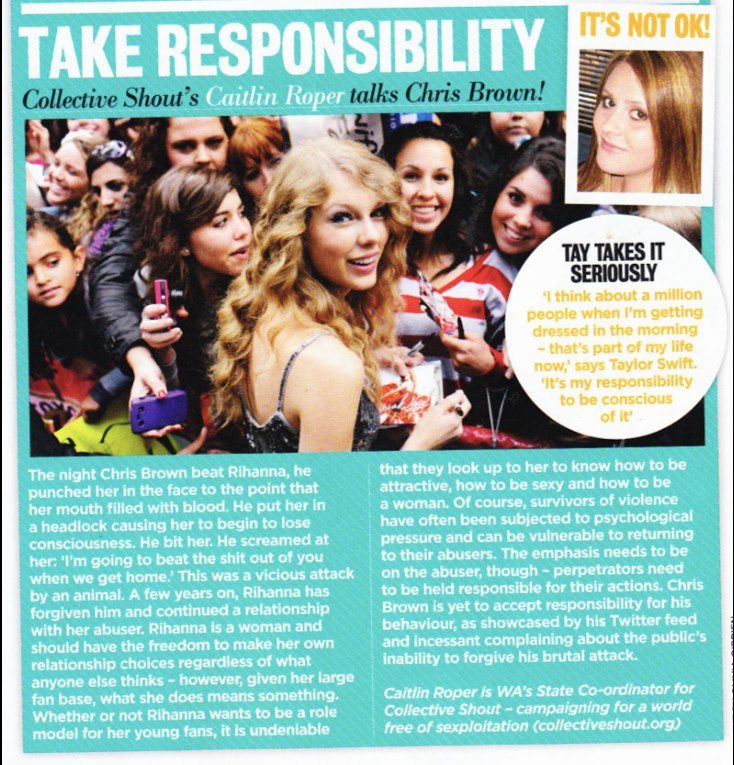 The night Chris Brown beat Rihanna, he punched her in the face to the point that her mouth filled with blood. He put her in a headlock causing her to begin to lose consciousness. He bit her. He screamed at her "I'm going to beat the shit out of you when we get home." This was a vicious attack by an animal.

A few years on, Rihanna has forgiven him and continued a relationship with her abuser. Rihanna is a woman and should have the freedom to make her own relationship choices regardless of what anyone else things - however, given her large fan base, what she does means something. Whether or not Rihanna wants to be a role model for her young fans, it is undeniable that they look up to her to know how to be attractive, how to be sexy and how to be a woman.

Of course, survivors of violence have often been subjected to psychological pressure and can be vulnerable to returning to their abusers. The emphasis needs to be on the abuser, though - perpetrators need to be held responsible for their actions. Chris Brown is yet to accept responsibility for his behaviour, as showcased by his Twitter feed and incessant complaining about the public's inability to forgive his brutal attack.