As reported by Daily Life

Mum's Diet, which was written by renowned New Zealand children's author Joy Cowley, is about a mother who thinks she's fat, so she puts herself - and her children - on a diet of tomatoes and lettuce for one day and parsley and carrots for the next.

Roper, who works with Collective Shout, an organisation fighting the objectification of women and sexualisation of girls in the media and advertising, says that she didn't want her daughter to learn about "fat talk" from a school reader.

"I make a point to have conversations with my kids about healthy behaviours: how healthy bodies can come in different shapes and sizes, that we eat good foods to fuel our bodies and we exercise because it makes our bodies strong and healthy. But even as small children, they are being exposed to toxic messages about eating and their bodies."

Lydia Turner, co-founder and psychologist from BodyMatters Australasia, says that young children often take messages in books literally. This is particularly the case within an educational setting, where books carry the weight of authority and trust.

"Mum's Diet reinforces body shaming and fear towards food. The mother character teaches readers that their self-worth can be summed up by a number on the scale - a dangerous idea," Turner says.

When Caitlin Roper spoke to her daughter's teacher about Mum's Diet, the teacher was similarly horrified by the book's content and agreed to get rid of it.

"The teacher was great," Roper says. "She even asked, 'How did this get published?'"

Mum's Diet was published by Sunshine Books in 1987 and it's not the first time the book has sparked controversy. In response to an article last year, the Victorian Department of Education instructed schools in Victoria to remove the title from their collections. Other states would do well to follow this example.

"I'd really like for schools to be withdrawing these outdated books and to be proactive about sending positive messages about healthy behaviours," says Roper. 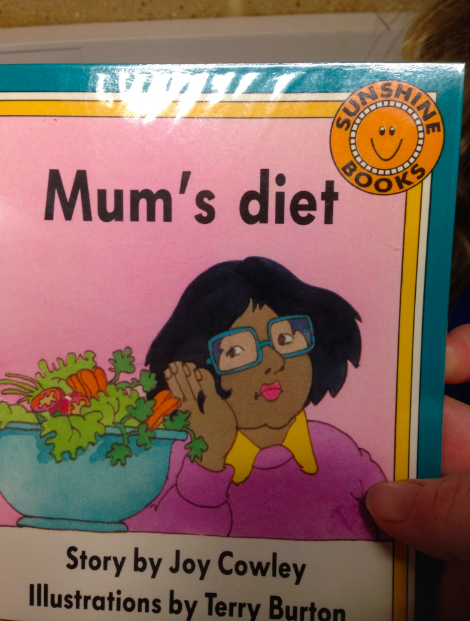