As reported by 3AW radio: 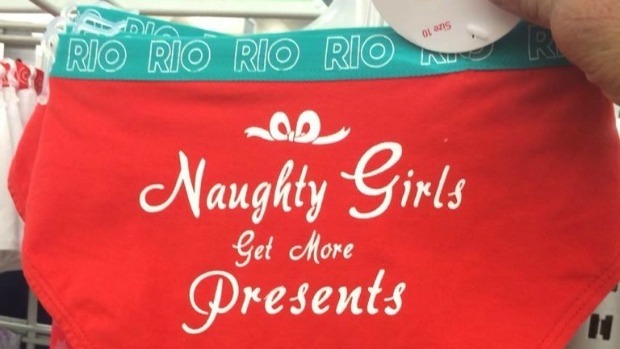 A range of Christmas-themed underwear for children at Big W has angered parents.

The designs use smutty slogans such as 'Naughty girls get more presents' and 'I can get you on the naughty list'.

"I assume they are aimed at kids if they're in the section where I got my daughter's size 1 top," she said.

Ms Johanssen tried to contact Big W and the underwear brand, Rio, with no response.

But after the matter aired on 3AW, Woolworths, which owns Big W, apologised and told Nick McCallum the store had been told to move the underwear.

"Unfortuntately this store has incorrectly merchandised womens underwear as products for juniors," Woolworths said in a statement.

"We're sending out an urgent note to all stores to ensure these products are correclyt merchandised.

"We apologise for any offence caused." 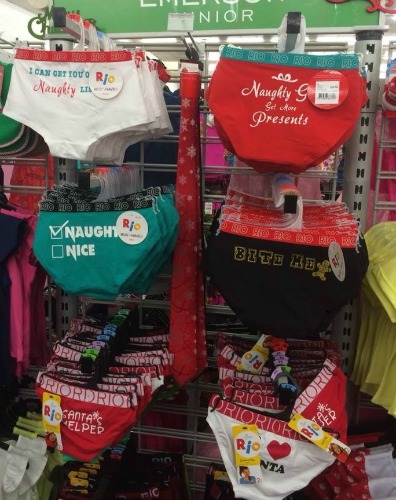 You can hear audio from the 3AW talk back interview at this link: http://www.3aw.com.au/news/mum-angry-at-naughty-knickers-20141221-12byo7.html

Big W has so far refused to respond to a petition calling for the removal of a women's Christmas themed shirt with the slogan "Nice Baubles" written across the chest.

This isn't the first time a retailer has used Christmas as a vehicle for sexualising girls. Other examples can be found in our successful campaigns against Supre's sexualised slogan shirts in 2009 and again in 2013.

Great work to Mariah Johanssen for taking the time to speak out about this during the busy Christmas season! Speaking out does make a difference.