A petition was started calling for Big W to remove a Christmas themed slogan shirt saying "Nice Baubles" from sale. 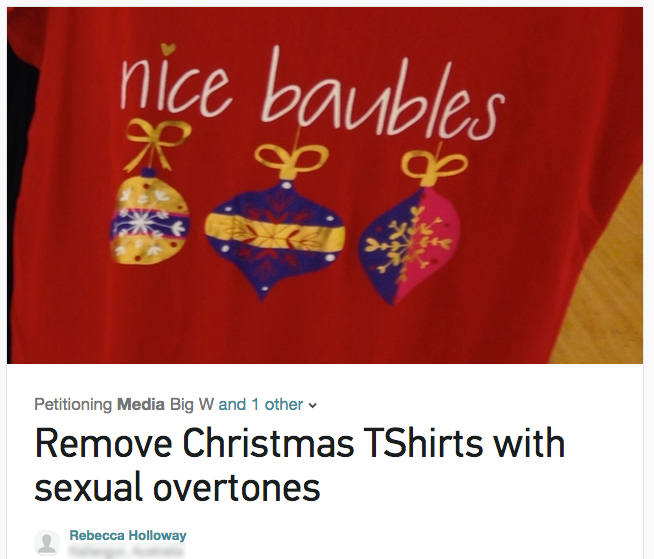 The petition to Big W, calling on the store to remove shirts with sexual overtones was started by Rebecca Holloway of Qld. She wrote on the petition:

For BigW, a supposed family store to sexualise Christmas is just so offensive. There is so much over-sexualised material in marketing. What is this teaching our children, particularly our young girls? Women are sick of being objectified for our body parts.

When asked about the shirts for an article in the Daily Mail, Collective Shout spokesperson Coralie Allison had this to say:

'These Tshirts can often have a double meaning and young girls can be innocently wearing them without realising the sexual connotation,' said Ms Alison.

'I expect more from a family department store like Big W. There should be checks and balances in place to ensure products that could be harmful to young girls are not ordered and approved for sale on the retail floor,' she said.

"Street harassment and violence against women is such a big problem in our culture and this Tshirt draws unnecessary attention to women and girl's chests and can encourage passers by to comment.'

It appears Big W didn't respond to the petition about the 'nice baubles' shirt - despite receiving over 800 signatures - but it was forced to respond to a similar issue when customers took their complaints to talk back radio.

The issue - yet another range of sexualised, Christmas themed merchandise - this time underwear.

In what was a very successful campaign calling on major department stores to stop selling GTA V, Big W refused to act.

In response to a petition from survivors of violence and prostitution, Target and Kmart pulled the game from sale. Just weeks earlier, leading New Zealand retailer The Warehouse Group had removed the game from sale after being approached by NZ anti sexual exploitation group Stop Demand. The retailer was praised for not only pulling this game but for taking the proactive step of de-ranging all R 18+ games and DVDs.