In the wake of the #MeToo movement, a range of businesses and industries have been forced to re-examine their business practices.

Last month, Formula One announced their decision to discontinue the practice of using ‘Grid Girls’, recognising the use of women as accessories was not in line with modern societal norms.

More recently, large automakers Toyota Motor Corp, Nissan Motor Co and Ssangyong have all shied away from the tradition of using attractive women to sell cars. Ssangyong’s “booth babes” will be replaced by male and female models in sportswear, and Nissan has stopped hiring fashion models. 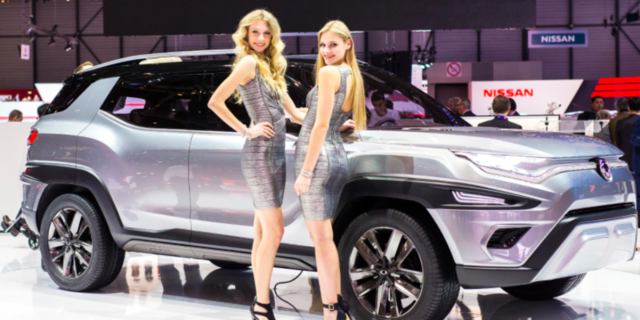 Bloomberg reported on the changes:

Lexus, the luxury brand of the world’s second-biggest carmaker, Toyota, confirmed it’s dropping models altogether at the Swiss event, while Fiat Chrysler Automobiles NV is said to have canceled contracts with several female models over concern about being criticized on #MeToo. The maker of the Maserati, Jeep and Alfa Romeo nameplates will instead feature men as well as women in less flesh-exposing garb than in previous years, two people with knowledge of the plans said.

This is in sharp contrast with 2017, when Alfa Romeo’s display had women in little black dresses hovering around its Stelvio crossover. Nearby, a brunette with a beehive hairdo and a bottom-grazing sixties-style dress kicked up her red heels next to a Fiat 500. At Lexus, a woman in an off-the-shoulder burgundy gown was stationed beside one of its sedans.

In the wake of the #MeToo movement, exposing the epidemic of men’s sexual exploitation of women, the casual sexism and objectification of women must be recognised as a significant contributing factor. There can be no gender equality while women continue to be treated as eye candy or props, valued primarily for their physical attractiveness. It’s great to see positive steps forward.