On Saturday night I was in the crowd at the Lingerie Football League game at All Phones Arena, Sydney Olympic Park.

I’m a former athlete. I have coached a number of sports including soccer. I made it to the Youth National Trials back home in England (until I did something stupid involving a bucket of soapy water, some friends who were not unknown to law enforcement, and a moving car, which ended my short lived career. But that’s another story).

A friend, who is a triathlete, agreed to come with me. We both follow sport. She didn’t make it to half time. As a serious athlete, she couldn’t handle the degrading treatment of women under the guise of ‘sport’.

She asked her boyfriend – also an athlete – to come and get her. He commented: "I think men don't go there for the sport the same as men don't go to a strip club to see a good dancer." 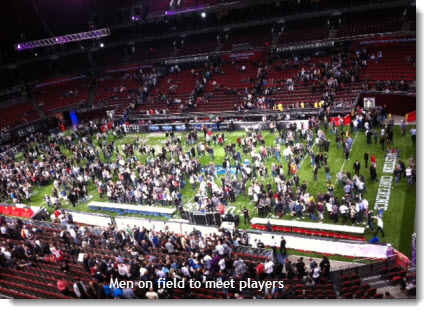 I stayed on to be able to report to my Collective Shout colleagues – and anyone else who cared – what took place that night. But it wasn’t easy.

There were many low points. Probably the worst:

• A player’s lingerie bottoms fall down (not entirely unpredictable, it’s what the mostly male crowd seemed to be hoping for). They go wild. The scene is then replayed on the large screen for their viewing pleasure. A man standing next to me says “This is the perfect sport!”

• The MC invites men to stand and be selected in the ‘Chase and tackle the girl contest’ to come onto the field and ‘tackle’ a real LFL player. Men stand and cheer, pointing at themselves while others fist pump the air. Three are chosen. The female player is brought to the ground. I wonder what protection the players have against sexual harassment and inappropriate touching. And what would happen if she were injured, given players have to sign a waiver of compensation form.

• A blow up doll is passed around near me. One man simulated oral sex as others laugh. Men pass the prized doll along until someone throws it into the VIP area, where an attendant confiscates it. The crowd boos.

• Some men opposite me make a stack with their beer cups. I have seen this done before. What I have never seen at any sporting venue was what happens when the host, an older lady, asks them to stop. The men insult her and throw their ($7) beers over her.

She appears shaken and leaves. 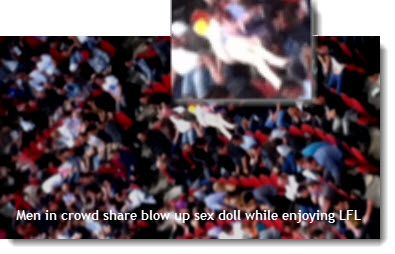 Touchdowns are celebrated by slapping thighs and making 'Pussy Signs' above the players’ heads. Apparently it’s a great thing to attract the hand vagina signal. The new Sydney recruits selected from tryouts on Thursday night stood to one end clapping and dancing to 'I am sexy and I know it'.

Men hang over the fence to get close-up camera shots of the player’s backsides.

As the player’s leave the field during half time a group of women enter wearing stockings, black high heeled boots and lingerie and hand out freebies to the men. The NSW team are introduced to the crowd. They run out and perform a set move - the sexier the move, the louder the roar from the crowd. A blonde woman who did the splits got the biggest reaction.

The second half gets underway and the men, fuelled by copious amounts of beer, become more aggressive. The music is pumped up.

The MC reads an ad for 'Mobile Tanning Service.' Given there were few women attending, of what interest would this be to the bulk of men in the crowd?

One player goes to the VIP section on field level and some men break the fence as they tried to grab her as she walks by. Security moves in.

When the game finishes the MC quickly announces that the party zone will commence in about 10 minutes for those with tickets. Fans who had paid could could stay back and take photos and do “whatever you want”.

LFL founder Mitch Mortaza made a statement over the intercom about how LFL was a new sport to Australia and how, despite the criticism, “You came the fuck anyways”. This is greeted by loud cheers from the fans.

The NSW team are sent out to parade around the field again. “They are all gorgeous girls, can't wait to watch them,” the commentator says.

A group of men walk past me as I’m sitting by myself. One asks “What are you doing here? Are you a f-ing lesbian?” I said no, but I am reporting on the game. They didn’t elaborate further on their lesbian theme.

I decided it was time to leave. I walk out, depleted.

Lingerie Football League is hailed as the all-new Australian sport and we are supposed to celebrate? It wasn't sport. It was a meat fest. It had the feel of a giant buck’s night. But it was on a sporting field so apparently that made it sport.

I call on sporting bodies and our Government, to step in to stop this. The game encourages sexist behaviour, it does nothing to promote women in sport on an equal footing with men.

What a sad day for women who do work hard for their sport, who go unrecognised, who can't get attention for their outstanding abilities because they wish to play  in practical, protective clothing and don’t want to be some man’s lingerie fantasy dressed up as sport.

Deborah Malcolm works with an international child aid agency and is a co-founder of Collective Shout: for a world free of sexploitation

See also: ‘Abused, called pussy, and told to pancake the shit out of her: my experience of lingerie football league try outs in Sydney last week’, MTR blog