The campervan company at the centre of a people-powered revolt over sexist van slogans has today issued an apology and committed to reviewing and removing sexist or misogynistic marketing from all vans in the next six months. 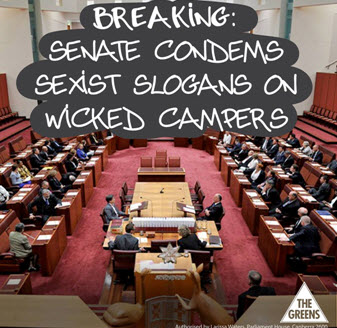 In an email from Wicked Campers received by Paula, she says they’ve offered a personal apology, have now removed the sexist slogan Paula’s daughter saw, committed to reviewing and removing insensitive slogans from all vans in the next six months. The statement reads: “Wicked Campers Owner, John Webb wishes to acknowledge the prevailing community opinion by REMOVING the slogan in question and making a commitment over the coming six months to changing slogans of an insensitive nature.”

Wicked Campers have been at the centre of numerous ad watchdog complaints and social media backlashes in the past, and Paula says that it was the change.org petition which gathered more than 110,000 sigantures that made the difference.

“I’m overjoyed at the result, and commend Wicked Campers for eventually listening to consumers that their misogynistic slogans weren’t acceptable.”

“This was a people power win. The change.org petition worked just as it intended, with more than 110,000 people signing, it was an overwhelming show of community support.”

“The kind of sexism and misogyny on those Wicked Campers vans isn’t trivial – it’s degrading to women, harmful for our children to consume, and condones a rape culture that sees one-in-three Australian women sexually assaulted in their lifetimes.

“I’m pleased my daughter said something, and that we stood up against it. It’s important that we call out sexism wherever it exists – and my change.org petition enabled me to actually make a difference and win change.”

Paula is urging those offended by the vans to continue to call out examples of misogynistic and offending vans by contacting the company and posting on social media about them – and she will be monitoring the company’s progress in removing offending slogans.

Karen Skinner, Australian Director of change.org says it’s an example of the growing success womens activism is having through online petitions.

“More than ever before, women are calling out everyday sexism and fighting back through social media and change.org petitions.”

“Online tools are giving women the ability to join together and achieve change incredibly quickly, in stark contrast to the individual complaints processes.”

“Women’s rights issues are among the most popular on change.org, and women make up more than 60% of our most active users. There’s a growing community going online and winning on these once-ignored issues.”

For more information and to see the petition

The Senate has unanimously passed a Greens’ motion condemning the sexist, misogynistic and racist slogans that Wicked Campers have on their hire vans.

“I’m pleased to hear that Wicked Campers have said they will remove the specific slogan that sparked on online petition signed by more than 120 000 people, and have committed to remove more of what they describe as “insensitive” slogans in coming months.

“I wholeheartedly congratulate and thank Paula Orbea, who started the petition after her 11-year-old daughter read the slogan which incited sexual violence against women and girls.

“Paula has shown that by calling out sexism and misogyny, we can put a stop to it, and change the culture that normalises and condones it.

“These sexist slogans promote violence against women, which is sadly a massive problem in Australia.

“Most often women know their attacker, with one Australian woman a week killed by her partner or ex-partner.

“Violence against women is certainly no laughing matter – it is a national emergency,” Senator Waters said.