Has Tyler the Creator breached his Visa conditions?

Collective Shout has drawn the attention of Immigration Minister the Hon. Brendan O'Connor to a series of rape and other threats from fans of US rap artist Tyler the Creator. We believe these threats have been fuelled by the artist’s abuse of our actions online. We are asking the Minister to examine whether Tyler the Creator has violated the terms of his visa conditions. Our letter, written by Caitlin Roper our W.A coordinator, appears below:

Last night, a young Australian woman [Name withheld] sent a tweet to a Sydney venue, criticizing them for hosting Tyler the Creator and promoting misogyny. Tyler the Creator actually re-tweeted her tweet, meaning he shared the woman's tweet with his 1.7 million followers. Unsurprisingly, many of his fans jumped at the opportunity to prove their loyalty by attacking her online. 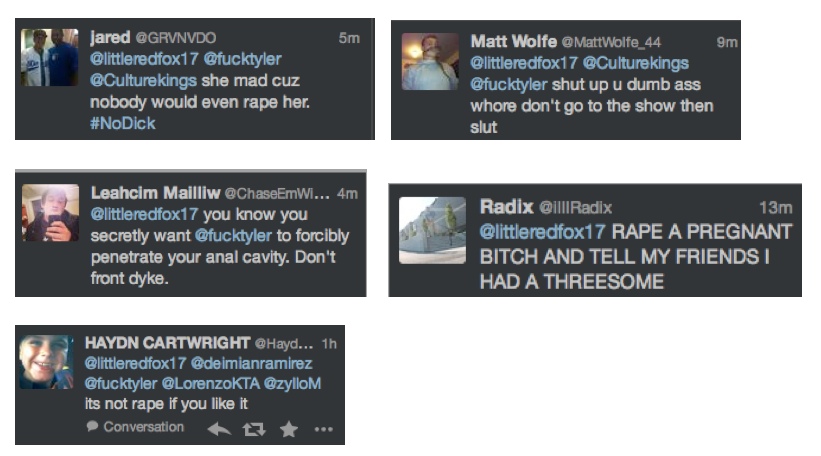 I began to defend the woman speaking out about violence against women. She too received a barrage of harassment and rape threats from Tyler’s fans. Once again this is only a small sample of the harassment I was subjected to.

Tyler the Creator shared the woman's tweet knowing exactly what lay in store for her- an onslaught of abuse from his devoted fans. Many of his fans would be more than willing to harass one of his opponents online if they thought they would gain favour with him. Without police resources, we cannot know how many of the abusive tweets were from Australian fans or fans from overseas.

A tweet from one of his fans (Julian Dom Taylor, below) indicates Tyler’s fans understood his intentions for the woman when sharing her tweet.

As the woman and I were receiving harassing tweets from his fans, Tyler the Creator tweeted about another instance where his fans rallied to attack someone online. He said “HAHAHAHAHAHA OMG THAT’S FUNNY”.

Tyler’s lyrics encourage extreme forms of violence against women, holding them hostage before raping and murdering them, stalking them and chopping them up and raping their corpses. Now his fans are threatening Australian women with violence in his name while he tweets as to how humorous it is. Surely this is vilifying and inciting discord in our community, as well as representing a danger to women who speak out about violence against women. Why are women not deserving of protection from the Australian government?

I urge you to take swift action to revoke Tyler the Creator’s visa.