Honey Birdette has racked up its 61st ad violation with another porn-style floor-to-ceiling shop window ad. The gargantuan image featured a woman straddling an object, head tilted back, eyes closed and mouth open.

I object to global porn giant - Playboy - exposing non consenting members of the Australian public - adults and children alike - to its floor-to-ceiling pornified shop window ads. This corporate has a 70 year history of objectifying and exploiting women and girls. That it continues to do so - via its sex shop chain Honey Birdette's graphic, sexualised and explicit images - some with the added element of eroticising violence - in our suburbs and cities, is reprehensible. These ads are larger than life - please note their enormity using the life-size mannequin frame situated next to the digital ad screen as reference. They are unmissable to passers-by. 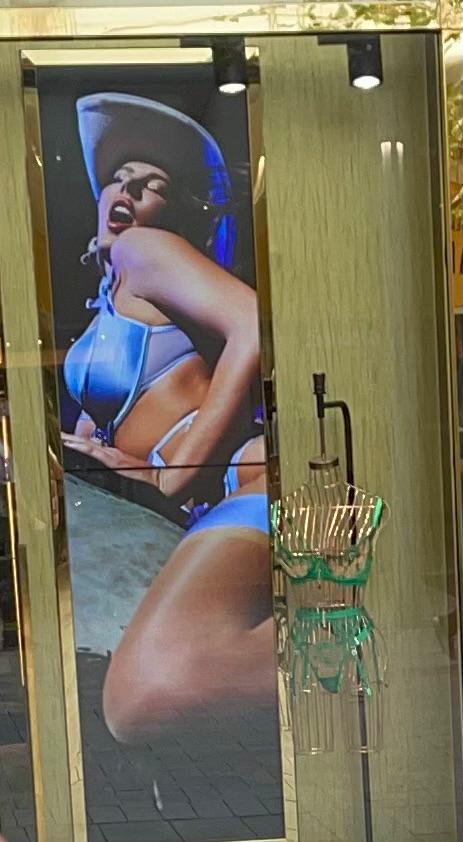 Honey Birdette responded to the complaint to defend the ad:

Our model is riding a mechanical bull in the context of our Western-themed lingerie campaign, and is obviously not engaged in sexual activity.

Ad Standards upheld the complaint on grounds that the ad 'did not treat sex, sexuality and nudity with sensitivity to the relevant audience and did breach Section 2.4 of the Code'.

Meanwhile, Ad Standards threw out complaints against other porn-inspired ads shown in the Playboy-owned sex shop's windows, effectively endorsing them as suitable viewing for children. Two of the images for 'Laura' featured full-frontals of a model in sheer green lace and mesh bra, briefs and stockings. A complainant objected to the ads on the basis that

In the original complaint, the complainant wrote: 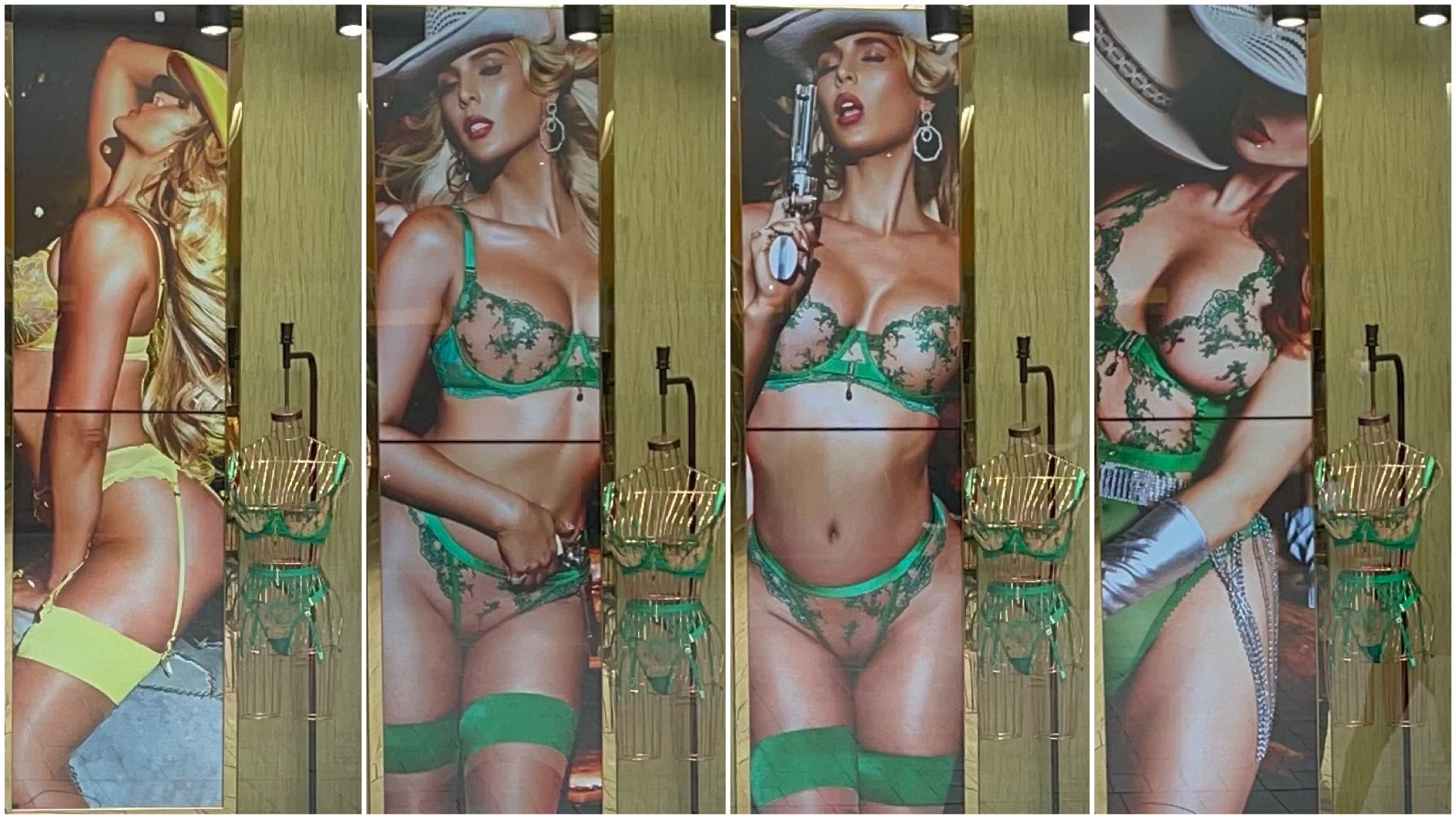 Spot the difference: According to Ad Standards, the same facial expression was 'indicative of sexual pleasure in 'Liva' (left) and 'mildly sexualised' + 'not the focus of the image' in 'Laura' (right). 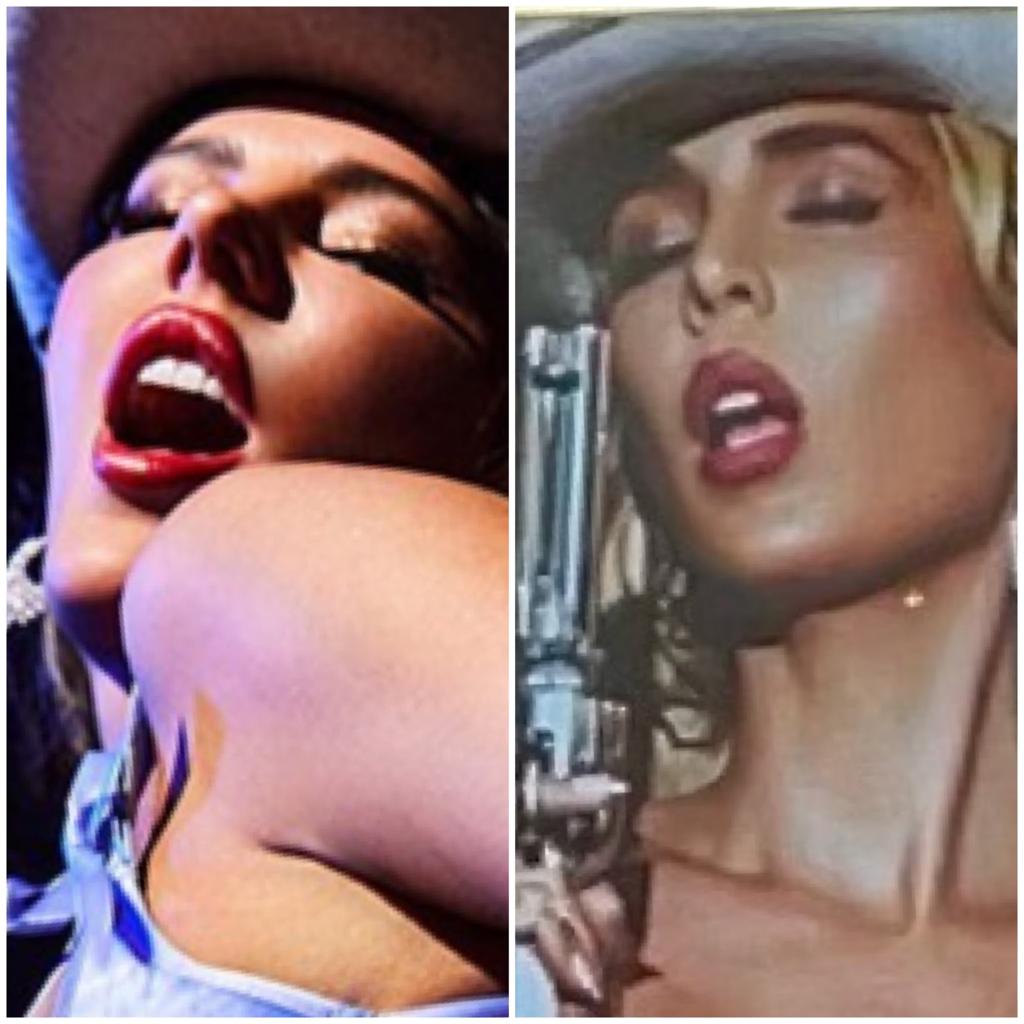 After noting the relevant audience of the ad included children, a minority of the panel noted that it was not suitable for public display. From the Case Report:

A minority of the Panel considered that the large size of the image and the suggestion of the woman’s genital region being visible through her underwear created an overall level of nudity that meant that the image was overtly sexual and inappropriate for the broad audience.

But majority - not concerns about community safety and well-being- rules at Ad Standards. Because the majority of the panel considered that 'the woman’s pose was not overly sexual' and that 'the overall impression of the advertisement was only mildly sexual', the complaint was dismissed. 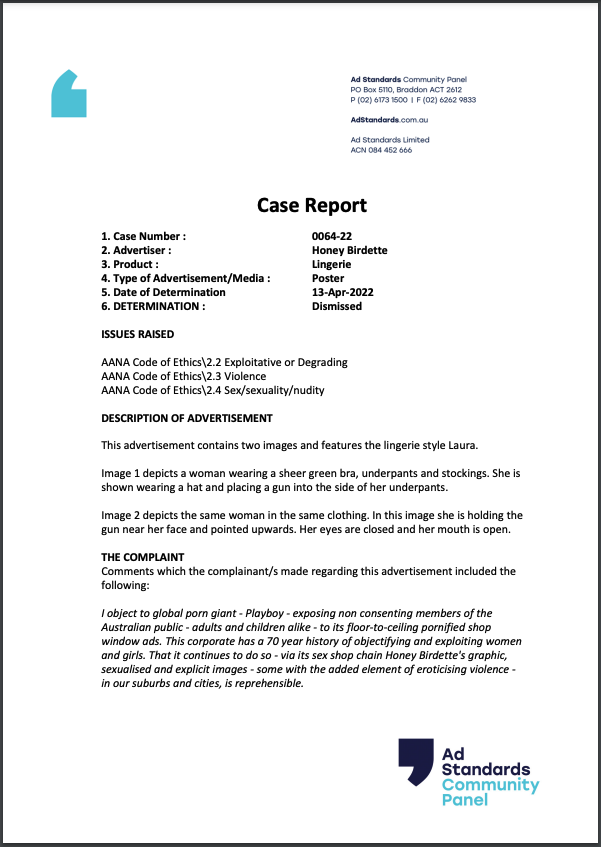 Ad Standards refused to even review this ad featuring a near-naked women, telling a campaigner that it was similar to other ads which Ad Standards had previously dismissed complaints against. 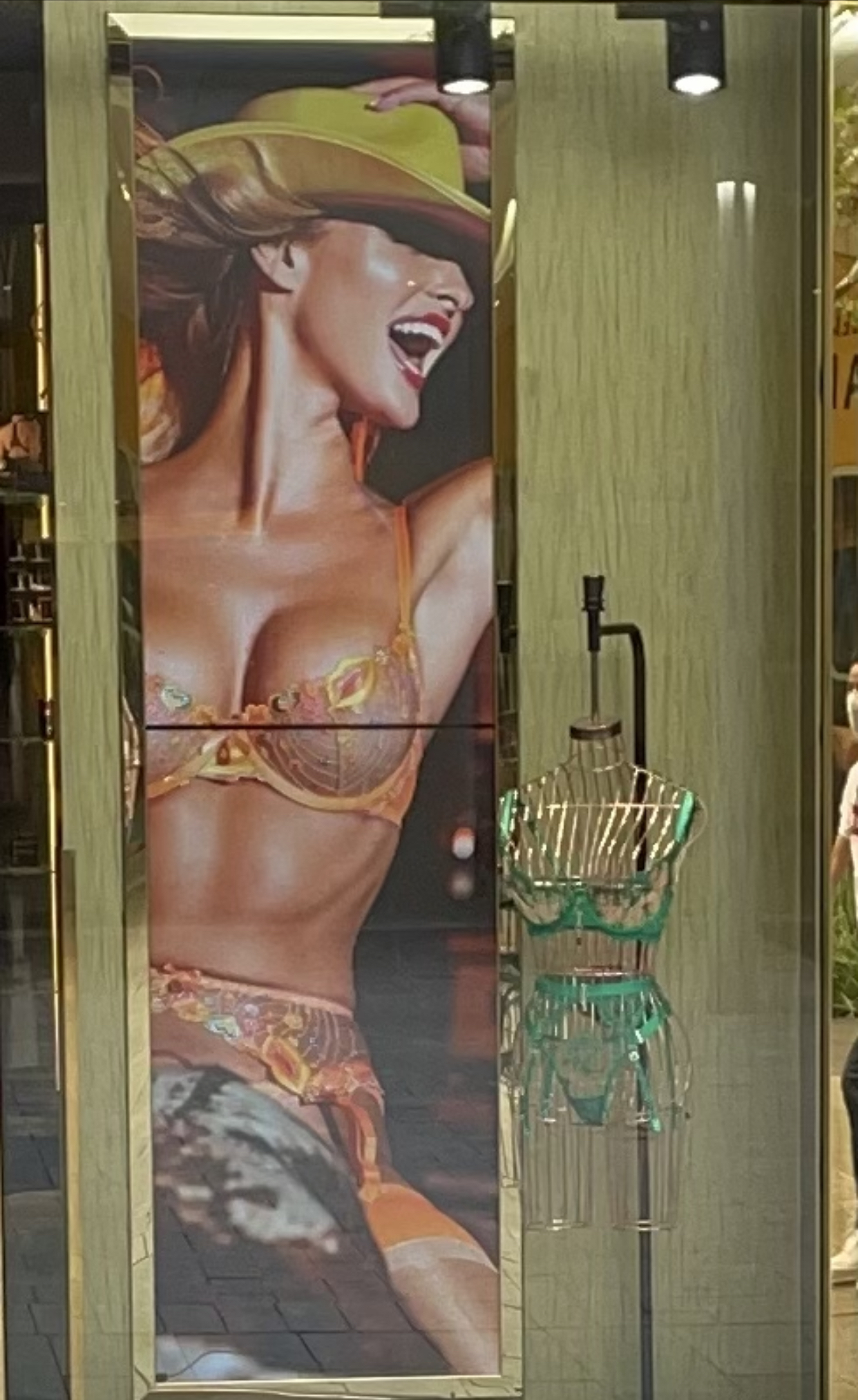 There is no transparency around how often Ad Standards refuses to review community members concerns about harmful, objectifying and porn-themed ads displayed by the Playboy-owned sex shop chain. A supporter told us that Ad Standards once said they couldn't possibly review all the Honey Birdette ads they receive complaints for.

In a May 18 email, Ad Standards responded to a campaigner's questions, stating:

We are actively working with the Shopping Centre Council of Australia to address issues of non-compliance by retailers in shopping centres. This involves establishing protocols with SCCA members to facilitate an appropriate resolution to upheld complaints. Our objective is to ensure that advertisements, in any medium, meet community standards and that those that do not are removed.

Ad Standards also said it was committed to operating in accordance with the European Advertising Standards Alliance (EASA) Principles and Standards of self-regulation Best Practice. The model is supposed to benefit the consumer, and have adequate sanctions which can be enforced.

Why does "working with the relevant authorities on the issue of non-compliance" look exactly like "working with vested interests to aid and abet repeat offenders"?