In Australia, sexist and sexually objectifying ads are only investigated if and when a member of the community makes a complaint to ad "watchdog" Ad Standards. The entire system is driven by, and relies on, community members making complaints. So what is the impact on this already flawed system if advertisers are permitted to intimidate and abuse complainants?

Earlier this year, we reported that Ad Standard was transmitting abusive comments from Honey Birdette to members of the community who complained about their porn-themed ads in shopping centres. Ad Standards published Honey Birdette insulting and intimidating comments in their case reports, which are emailed to complainants and published on their website.

One of our supporters made a complaint to Ad Standards over this sexually objectifying Honey Birdette ad that appeared as an (unsolicited) sponsored post in her Facebook feed. 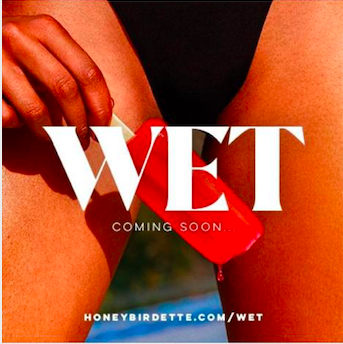 The image dehumanises and sexually objectifies the woman by reducing her to her sexual functions/responses, and through reducing her to a single sexualised body part. Decades of empirical research on this sexualising and objectifying treatment of women in advertising has found a range of harms to women, including higher levels of body dissatisfaction, greater self-objectification, greater support of sexist beliefs and of adversarial sexual beliefs, and greater tolerance of sexual violence toward women, as well as leading both men and women to have a diminished view of women's competence, morality and humanity and has been linked to men's violence against women (Ward 2016).

Honey Birdette continues to demonstrate their contempt for women through their consistent pornified and misogynistic representations of women. This image reduces women to nothing more than wet vaginas. Women should not have to tolerate this hateful and dehumanising treatment, or unsolicited exposure to images that portray us as objects for men's sexual use.

This was a paid promotion- a sponsored post that showed up in my Facebook feed without my having visited Honey Birdette's Facebook page. This content is not limited to Honey Birdette's customers or those who have visited their page.

For once, Ad Standards actually upheld the complaint (although as per usual, Honey Birdette have refused to comply- the image remains on their Facebook page). But they allowed Honey Birdette to direct personal attacks to the community member, insulting her intelligence, painting her as "outraged" and accusing her of lying.

According to Honey Birdette, the term "WET" emblazoned over a woman's crotch complete with a dripping icy pole, was merely a reference to swimwear, and acknowledging the obvious sexual innuendo was a "deliberate misreading" of the ad.

This is another image from the same ad campaign- how stupid does Honey Birdette think we are?

An image from the sex store's Facebook page shows the slogan "Get wet with Venus" used to promote one of their sex toys. Is this also a reference to swimwear?

Honey Birdette also accused the complainant of lying about the post being a sponsored post that appeared unsolicited in her feed. She wasn't. 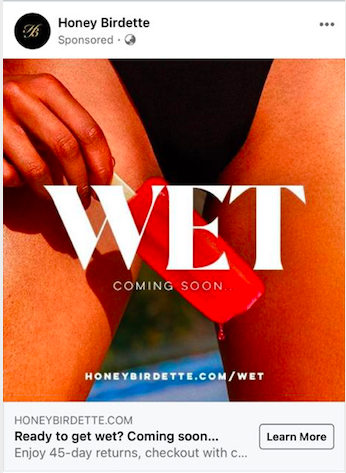 At the very least, Ad Standards has a responsibility to not facilitate the abuse of community members by unethical corporates like Honey Birdette.