Our Queensland Volunteer Coordinator Angela shares her experience of a two year long fight trying to get a strip club billboard taken down. While the Advertising Standards Board upheld complaints, the strip club owner refused to take it down- and the current system of advertising (self) regulation means he doesn't have to, and that there are no penalties for non-compliance. 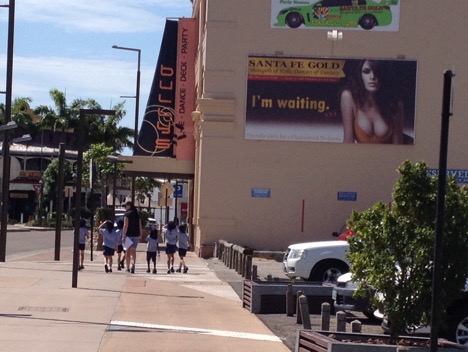 I was contacted by a local Collective Shout supporter who had been confronted by a billboard for a strip club upon taking her children out to the museum.

The following month, I made an official complaint to the Advertising Standards Board (ASB). The ASB upheld my complaint, ruling that:

-       the ad was degrading to the model and to other women

-       the ad did not treat sex, sexuality, and nudity with sensitivity to the relevant audience

-       the ad presented women as subservient and this was degrading to all women.

At the same time I contacted the (then) Deputy Mayor of Townsville, Vern Veitch to see if anything could be done on a local level. Mr Veitch responded as follows:

Thanks for your actions on this Angela. I stand by me comments that this type of advertising in view of the public is simply inappropriate and it has been reported to our staff. It is likely however that the Advertising Standards Board is the right agency to enforce suitable standards as councils have limited powers and these standards need to be common across Australia,

However, the strip club owner, Greg Pellegrini, has refused to take the sign down.

I sent a follow up email to the ASB letting them know that the ad still remained. I had contacted the owner directly who advised me that he would not be removing his sign unless the other “gentleman’s club” across the road removed their signs. While the signs across the road depicted nudity, their placement is far less obtrusive than the Santa Fe billboard. I also mentioned to the ASB that come of the comments included in the very recent inquiry into outdoor advertising talk about the reluctance of business owners to remove offensive signs. I asked if they were able to follow this up or recommend other courses of action. The response was very disappointing:

Thank you for your correspondence.

The national system of advertising self-regulation is built upon the cooperation of advertisers to voluntarily comply with the advertiser Code of Ethics.

The level of non-compliance by advertisers is very small in numerical terms, however such action creates a significant impost on the resources of the ASB.

In case 0252/13, the advertiser confirmed that the advertising on the signage would be modified or removed in compliance with the Board’s decision.

Since we became aware that the advertiser has not yet complied with the Board’s decision, we have been in contact with the advertiser’s legal representative via both email and telephone to obtain clear advice about the removal or modification of the advertisement under complaint.

We will continue to pursue this matter until there is a resolution.

In the meantime, you may also wish to write to your local member of state Parliament and/or the Queensland Attorney-General about the failure of the advertiser to comply with the decision of the Advertising Standards Board.

I contacted the Mayor of Townsville, Jenny Hill soon afterwards but still had no response by August 2014. Another local Collective Shout member contacted our Federal Member for Parliament, Ewan Jones, who said it was a State matter and to contact our State Member. I sent another email to the Mayor in August stating:

The Santa Fe Billboard still has not been taken down and the Advertising Standards Board have recommended I get in touch with council to see if there is anything else that can be done to get the owner to comply with their ruling. Unfortunately the ASB relies on advertisers self regulation and have no other means of enforcing decisions. Is there any the council can help?

I received no response.

By now our local group had given up due to lack of responses or avenues. An article appeared in the local paper stating that the ASV Watchdog was powerless to remove this billboard and it was likely that it would never be removed.

It is now March 2016 and despite the fact that the ASB ruled the ad was in breach of industry codes, the ad remains- in plain sight and there is nothing anyone can do about it.

Self regulatory cooperation of advertisers? Is this a joke? The system is broken.