What does Australia's Next Top Model think of its models?

The clue is in the advertising. 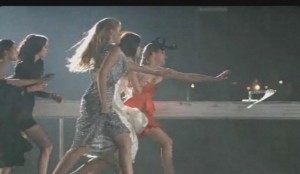 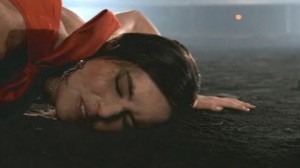 Recently, I saw this ad for Australia’s next top model. Women are released from horse racing stalls to chase the lure, which is a modelling contract. Women trample over each other as they run, one woman falls over and face plants the dirt. Women are photographed as they cross the finish line for a 'photo finish.' Host Sarah Murdoch then describes them as ‘model thoroughbreds’ and asks us to tune into Australia’s next top model.

While this appears to be a horse racing track, the use of a lure or bait is more closely associated with greyhound racing. When this ad was posted on the Bodymatters facebook page, someone made this very good point:

It seems as though the ad almost tongue in cheek- where the last laugh is at the models. You see the bait/ lure is usually fake. The dogs are usually badly treated. They have a fairly short working life and are then generally discarded. Its also known as the sport of working class men.

Check out the ad here:

Women are treated as animals, willing to trample over each other to win the modelling contract. The highly competitive and abusive nature of the competition is promoted as entertainment, something to ‘tune in to.’ They are seen as animals, even as dogs.

But what should we expect from a competition where last year's winner is considered plus size (she was a size 10)  and one of the judges – Alex Perry – has fobbed off concerns over harms to women’s health, eating disorders and death from pressure to be 'skinny', as something he can’t be ‘burdened with.’  Apparently we can “jump up and down as much as we like” he will only design for 'skinny.' He talked about women’s “choice” to be extremely thin. Do women really choose to waste away and die? For more on this sad little man read Lydia Jade Turner and Sarah McMahon’s blog post here.

But it gets worse. Already this year, one of the contestants has been told that she is 'too big.' Ashlea Monigatti, 16, said she was "embarrassed" and shamed into eating salad after being excluded from a parade at the recent Australian Fashion Week in Sydney. She is a size 8. What planet are these people living on?

Where is the condemnation of this from Sarah Murdoch? One of life’s baffling ironies is the fact that Sarah, while being the host of this show, is also  on the Body Image Advisory Group. This Group was funded big dollars to come up with a list of recommendations for the government to promote positive body image. The report was presented to Minister Kate Ellis to great fanfare and excitement. Sarah appeared on the front of Women’s Weekly unretouched.  ie. a real photo, unlike the digitally mutilated images we usually get in magazines. Much was made of how brave it was for Sarah to do this. Women’s Weekly editor Helen McCabe put it in perspective by saying "The one point I have to make is that this is possibly one of, if not the most beautiful woman in Australia that I've done this to, so the risk is not that high." What she is referring to is the risk of not selling any magazines.

So why is our positive Body Image advocate hosting a body judging competition where size 10 is 'plus size' and size 8 is 'too big?' How can she work alongside a misogynist ‘thin is in’/don't bother me with stories of dead models designer like Alex Perry who has previously referred to contestants as being like a 'wild pig?'

One of the biggest problems with positive Body Image initiatives and media in this country is the complete lack of consistency. Any attempt at change is purely token.

Magazines claim they want to promote body diversity and throw in a few size 12 or 14 models on the back pages. (who are often completely in proportion and digitally altered mind you).

They devote a few pages to ‘unretouched photos’ and claim to be promoting ‘real women.’ No mention of lighting, the posing and the dozens of photos taken to get the perfect photo that presents the model in the ‘best’ way possible. Or hey, lets just use "Miss Universe" or 'the most beautiful woman in Australia' to promote 'positive body image.'

The government funds a positive body image strategy team which includes a model that promotes weight loss in modelling competitions and a former editor of women’s gossip/fashion/dieting magazines with a website that includes ‘frockwatch’ where you get to compare ‘the good, the ugly and wtf?’ Does this constant focus and critique of women’s appearance promote positive body image?

Ultimately, the recommended code that was submitted to the government, is voluntary. Perhaps the first step is for those on the Body Image Advisory Group to sign up to their own code or step down and make way for someone who will do the job with some integrity. The mental and physical health of women and girls is too important for compromise.

The Beauty Industry will conform to this? That'll be the day - Melinda Tankard Reist