Pull the Pin rallies held around the country a huge success

Collective Shout has been active in supporting the Pull the Pin rallies against child beauty pageants held around Australia on Tuesday. Some of our team were proud to host or speak at the rallies, which attracted national media attention on  this important issue.

What has been remarkable about this campaign is the collaboration between various individuals and groups all working towards a common goal of seeing child beauty pageants become a thing of the past. All of us involved with this campaign have either been speaking out on camera, on radio and in news articles. It is very clear from the feedback that Australia does not want child beauty pageants here. Our little girls deserve better.

Collective Shout’s Collett Smart has written about her involvement with the Sydney Rally, as posted at FamilySmart. 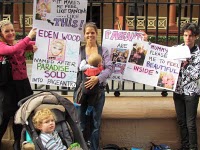 urned home on Tuesday incredibly excited and inspired by the men, women and children that had joined me in Sydney and other cities at the Pull the Pin rallies around the country. P

eople came along during their lunch time, to protest against the child beauty pageants coming to Australia.

One mum, who I called 'Wonder Woman', came to the city with her 2 children in a stroller, one still being breastfed, via public transport! Not only did she manage that, but she had also made a whole heap of posters for us to hold up at the rally. 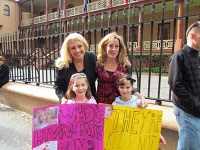 I had the honour of speaking at the rally in Sydney, alongside my colleague and fellow educator Dannielle Miller. Thanks goes to Catherine Manning, also an educator and mum of 4, for pulling together the rallies around Australia on the 24th May. Catherine had each rally end with this statement,

" Today, state and federal governments across the country have heard from child development professionals, experts/academics and the greater community, and can't deny the concerns raised about child beauty pageants and their toxic culture. Of those polled, time and again, over 95% of people want to see the government pull the pin on child beauty pageants. 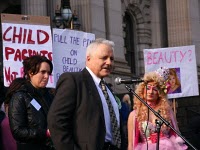 We call on our governments, both state and federal, to respect this requesand impose age restrictions on beauty pageants and adult cosmetic procedures for children, in the best interests of all children, our Australian culture, and the status of women."

Here is Catherine Manning with Neale Burgess, Liberal Member for Hastings, at the Melbourne rally.

Every protester that attended the rallies around the country would represent a few hundred others that are against child beauty pageants. If you just take a look at the social media pages Australians Against Child Beauty Pageants and Pull the Pin, the accumulative number of people against this trend is (at the time of publishing) around 6000 followers. While the pro-pageant page has only approximately 300 supporters.

Go here for a glimpse into the Sydney rally featured on the Channel 10 news. 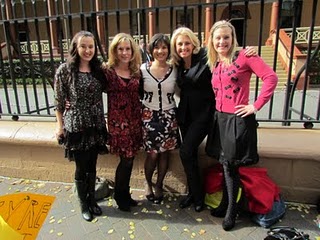 People have asked if we are disheartened by the fact that pro-pageant parents have not changed their minds about entering their children into these activities. Although I am concerned for the future mental health and development of pageant children, I felt empowered a few weeks ago, when I spent some time with renowned psychologist Steve Biddulph, along with my fellow Collective Shout advocates. Steve encouraged us by saying that we may never change the mind of those on the opposite extreme to us, but what we can do, is empower and encourage people who may not be aware of the dangers that certain activities pose to society. 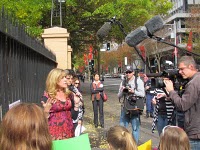 Indeed, I feel excited at the media coverage that the anti-pageant rallies received, in being able to get the message out about the harms of child pageants on child development. I had the privilege of speaking to fellow protesters, the media and passers by about some of the myths believed regarding child pageants having a positive effect on childhood. Hence, we continue to appeal to government to step in.

There is an overwhelming appeal by child mental health experts in Australia and New Zealand that have backed calls for child beauty pageants to be banned, saying they encourage the sexualisation of children and can cause developmental harm.Phillip Brock, the chair of the Royal Australian and New Zealand College of Psychiatrists believes that:

"We're giving these kids messages that how they appear, how they perform and standards about what they're to come up to is actually more important than what they're like inside. Direct participation and competition for a beauty prize conveys messages relating to the desirable self, social and personal value and shapes emotional and psychological development. Infants and girls are objectified and judged against sexualised ideals.
The mental health and development consequences of this are significant and impact on identity, self-esteem and body perception.
"There are many healthy contexts for dressing up, parading, role rehearsal and participation in school performances, etc where children can act out their development in an age-appropriate manner."

So, if you were not able to attend the rally in your city, but would still like to make your voice heard, please join Collective Shout members, teachers, psychiatrists, parents, child counsellors and other professionals and sign the national petition, Stop US child beauty pageants in Ausralia.

Dannielle Miller of Enlighten Education has also written about the rallies here. Check out her blog for some more great photos and also a video of Dannielle speaking about child beauty pageants on the Kerri-Anne show.

[UPDATE] The petition is now closed. Thank you for your support.