Writing on twitter, Ahmed shared photos of the 2003 textbook, Advanced examination techniques in orthopaedics. The textbook, which Ahmed says is required in an Australian medical school features images of fully dressed male doctors demonstrating examination techniques on scantily clad women in sexualised poses. One of the women is wearing a see-through top.

The 2013 version of the textbook, renamed Examination Techniques in Orthopaedics has the same problem, featuring a new set of sexualised photos.

And if you were thinking that this textbook had been ‘modernised’ in the new edition, you would be very wrong. @CUPAcademic why are you repeatedly publishing images which objectify and demean women? @davtw @jessradio @CCriadoPerez #EqualityCantWait #WomenInMedicine #racs pic.twitter.com/opFuUrQtPJ

In response to criticism Cambridge University Press issued a statement conceding that some of the images were ‘out of place’ and would be reviewed before the release of a new edition of the book. However they played down the problem, defending the textbook as ‘widely used’ and ‘well received’ in academic journals. 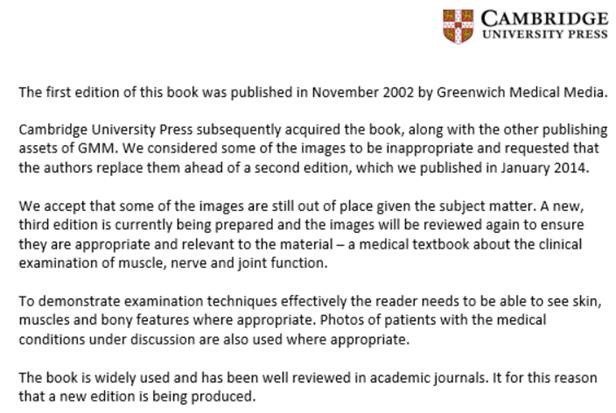 The problem is that the books are both still available and used. They perpetuate the stereotype that women are sexual objects for powerful men to use. They jeopardise the doctor patient relationship, and erode trust in male orthopaedic surgeons.

The books also promote a ‘boys club’ culture where male surgeons bond over the ogling of attractive women, even when this is most inappropriate, as in the case of the vulnerable patient. This culture makes orthopaedics a very unattractive speciality for women surgeons.

We know that fixed gender roles and objectification of women are the kindling for misogyny and violence against women. We know that doctors play an important role in identifying and managing vulnerable women. This makes these images completely inappropriate - in both editions

It would be most appropriate to stop distributing such damaging material. Further editions should have representation of male patients, female doctors, and there should be no attempt to titillate. Women patients should be appropriately dressed.

This is an opportunity to reflect and educate. Time is up for sexism in medicine.

As it stands you’re still profiting and distributing degrading images of women under the guise of medical education. You’re contributing to the huge problem of objectification and mistreatment of women. I look forward to a practical response #WomenInMedicine #WomenInSTEM

We couldn't agree more. We must call out sexism and sexual objectification wherever we see it.