Collective Shout supporter Tien Kelly alerted us to a swimwear company mentioned on reality TV program 'The Bachelor.' One of the show's contestants, Noni Janur, co-owns swimwear company "Balini Bikini" and claims she designs swimwear to ‘empower women.’ Keen to find out more about the range, Tien searched 'Balini Bikini' online and was soon browsing through its Instagram page.

What she found wasn't ‘empowerment’, it was just the same old sexual objectification. Many images used to promote the range were far more focussed on women’s backsides than swimwear. A number of images don’t include clothing at all. 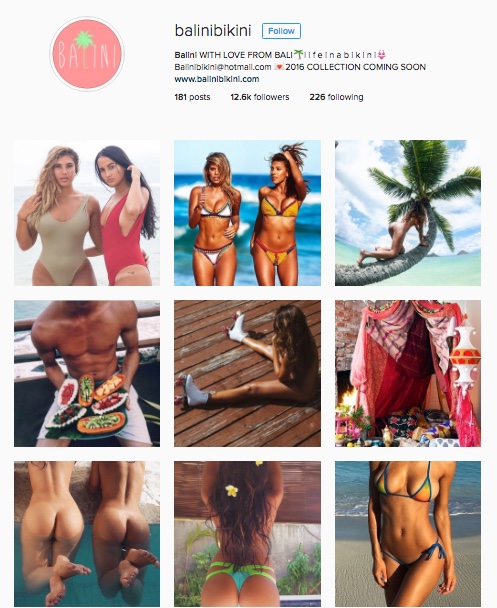 But it was the images of underage girls that were most jarring. Tien wondered if the girls were as young as they appeared to be. Based on information posted online to promote the models and the time stamps on instagram posts, Tien was able to ascertain that at least two of the girls were underage, approximately 14 or 15 years old at the time of the photoshoot.

Inca, approximately 14 years old is shown in a state of undress, standing in a protective pose with a concerned, worried facial expression. Another image shows Inca wearing a g-string 2 piece and positioned clinging to another model, with protective hunched shoulders and with the same uneasy facial expression.

Other images in the same series sexually objectify the 14 year old by zooming in on her bare backside.

Commenting on the images Tien said:

I really don't think that this type of advertising is okay. If she wants to make skimpy suits and gym shorts, then fine, but don't put a 14 year old in it, or make women into pornographic images.

Additionally I think that we should be encouraging women to be fit and healthy and feel happy, rather than feel the need to sexualised and worried what they look like when they are exercising.

In addition to sexualising girls, Janur has admitted to providing a minor with smoking products in order to photograph her smoking. Frances, around 15 years old in this photo is pictured exhaling a plume of smoke.

When asked for an explanation, Janur told the Courier Mail:

“(The model) was 15-years-old at the time this photo was taken, which was two years ago, and she continues to model today.

“The smoke seen in the image was a tobacco-free and legal vapour.”

Is it legal? According to legislation (Page 18), if a parent or guardian provides the product, yes.

“…a responsible adult for a child does not commit an offence by supplying a smoking product to the child.”

This explains why Janur made a point of saying that the child's parents consented to the photoshoot.

But is it ethical? Of course not. Children have rights. Providing a child with a substance to flog some bikinis is child exploitation, as is the depiction of children as semi-naked, vulnerable sex objects.

Tien made a complaint to the Advertising Standards Board (ASB) about the images on Balini Bikini’s instagram account. The ASB has stated it cannot address the complaint as the company is operating out of Bali and doesn't appear to be targeting an Australian audience. These advertisements - one including a photograph of a 14 year old girl with an exposed backside - suggest otherwise. 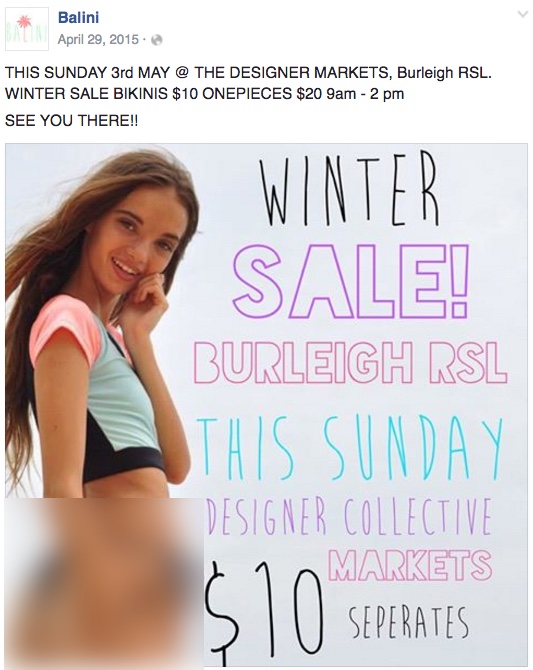 Boycott brands like Balini Bikini that sexualise and exploit children for profit.

Share this article with friends so others doing their online shopping will be able to make informed choices about which businesses to support.

Why are models posed the way they are? Read:  As subtle as the pose: keeping women in their place