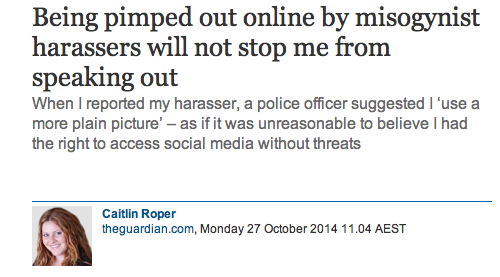 Earlier this year, Germaine Greer argued that women now are worse off than ever, citing the proliferation of pornography and the level of harassment and abuse directed toward women on social media as evidence. I tend to agree.

For a feminist campaigner like myself, threats of violence and rape have become part of the territory. I am used to being called a bitch, or a slut. I’ve been singled out by men’s rights activist group A Voice For Men after writing a piece on the media’s bias against women. I am no longer surprised when I receive unwelcome sexual comments online about my body, some of them even letting me know they are masturbating to my photograph. I am also no longer shocked when I receive rape threats while campaigning against sexual violence (the irony is not lost on me).

When I found a copy of my Twitter profile offering sex to men on the Internet, my limit was reached. It was so close to identical it even fooled me – initially I thought my account had been hacked. My profile picture had been sent to an online community sharing images of women for masturbation purposes. My Twitter bio had been updated to include graphic descriptions of sex acts I would perform, inviting men to follow me. It also described me as “the biggest slut in Australia”. My website was changed from collectiveshout.org to a pornographic website. Various tweets were sent out in my name, claiming that I enjoyed being raped. 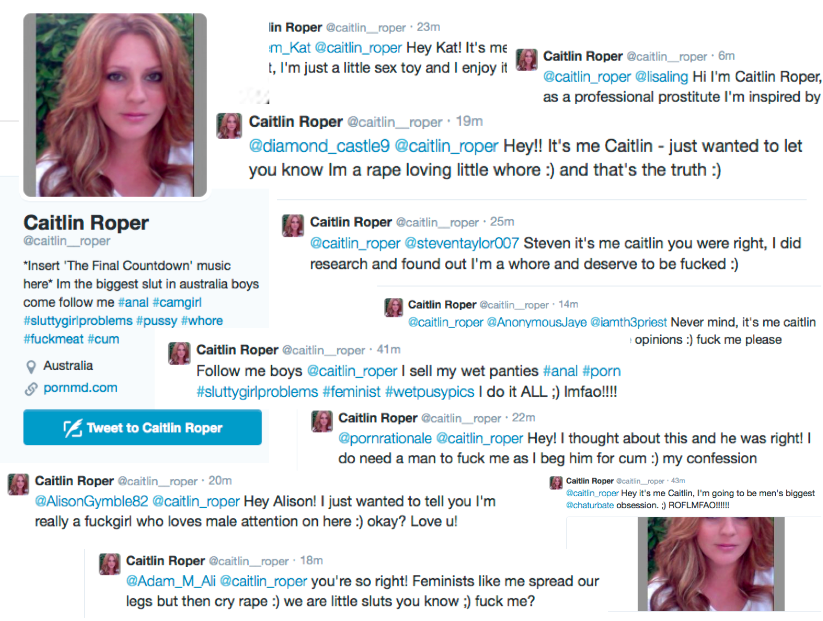 I was gripped with panic. There were so many thoughts running through my mind as I watched tweets going out in my name soliciting some men I knew, and others I didn’t.

And so I reluctantly went to the police station, already knowing that threats against women online are not regarded as a priority. “Why don’t you just close down your account?” asked the officer taking my statement.

I explained how I used Twitter in the course of my work for a non-profit organisation. She pressed further – “but why do you need to use it?” – as if it was somehow unreasonable for me to believe I had as much right as anyone to access social media without threats.

My colleague Talitha Stone also received international media attention when she was targeted with thousands of rape and death threats after criticising Tyler the Creator’s songs (whose lyrics include “rape a pregnant bitch and call it a three-way”). Tyler’s 1.7m twitter followers went after her, with one saying he would “cut her tits off”. A student from a Melbourne Catholic boys school shared her home address with the angry mob. He was out by one street. Local police sent Talitha home with a stack of cyber-safety pamphlets.

Another colleague went to the police after one man described how he intended to mutilate her body and dissolve it in acid. The police officer suggested that the Internet was “not a very nice place”, and maybe she should stay off it.

These threats are criminal. They are designed to erode any sense of safety and security and to keep women in our preferred place. As Anita Sarkeesian from Feminist Frequency observed, Elliot Rodger used the Internet to make threats preceding his violent killing spree. How many other men, including unstable ones, feel supported if not justified in their hateful attitudes by an online culture of misogyny?

When I reported the man who was pimping me out online, the officer at my local police station suggested I “use a more plain picture”. From my experience, how I look is irrelevant. I’ve been called both “fat, ugly and bitter” and “f**ckable”. Regardless of the headshots women use, men will target us if they feel so inclined.

There is a pattern at work here: these men believe that if they can make us fearful enough, we will stop doing our work and stop challenging systems that privilege their rights over ours. They are wrong. We just get back to work.

The man who targeted me has been identified. His name is Nader, he is 25 and lives in California. He has been linked to at least eight different twitter accounts he uses to abuse women. In fact, the first rape threats he sent me came from the fake account he had created of yet another feminist campaigner he had been targeting.

He is so brazen about his incitement to rape me, so sure of his invulnerability, that he barely even tried to conceal his real identity. Unfortunately for him, in the course of harassing countless women he left a trail leading to his name, image, phone number, email address, Facebook page and pictures of him exposing his erect penis.

Copies of Nader’s threats and his personal information have been supplied to the LAPD, to to the school he lists on his social media pages, and to Australian police. I am also aware of complaints against him from women in Sweden and the UK. This has not stopped him.

To their credit, Twitter acted quickly to suspend the fake account once I had verified my identity with photo ID. However, the victory is only short lived. Once an abusive account is suspended, there is nothing to stop the user simply signing up for a new account.

The silver lining is that I have had the privilege of connecting with incredible women online. These women are dedicated to challenging attitudes and institutions that promote and profit from sexism, exploitation and men’s violence against women, despite the emotional toll. These are the women who stand with me and other women time and again in the face of ugly threats, bonded by our refusal to be silenced.

Together, we are unstoppable.