Our response to Etsy defenders 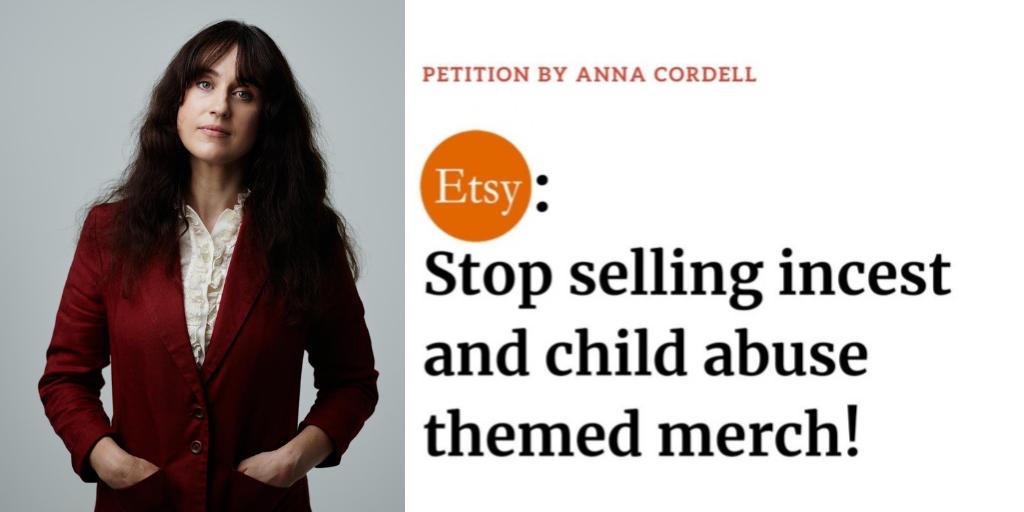 Since we launched our campaign calling on Etsy to stop selling child sex abuse dolls and incest and child abuse-themed merchandise, almost seven thousand people have signed the petition. We have also attracted the attention of some Etsy defenders- we respond to their claims below.

Some people (often men) accuse other people (often women) of being ‘vanilla’ for objecting to the eroticisation of abuse, including incest and child sexual abuse. The term vanilla is used to characterise a person’s sexual preferences as plain and therefore boring. What they are really saying is that sex that is not premised on domination and subordination, on eroticising unequal power relations and inflicting pain on one’s sexual partner (again, often a woman) or based on the dynamics of slavery is dull or passionless. Also, that individuals who prefer sex premised on intimacy, affection, mutual respect, love and connection are ‘vanilla’, and boring sexually. What they really mean is that hurting women is enjoyable and that seeing women in pain is sexually arousing.

Some people engage in a sexual practice called ‘ageplay’, or DDLG (Daddy-dom-little-girl), where they recreate and enact fantasy scenarios of men’s sexual abuse of girls, including their daughters. Defenders of these practices that repackage child sexual abuse as a fun, sexy fantasy, frame their playing with the dynamics of incest and child sexual abuse for sexual enjoyment are a legitimate form of sexual expression, or a “kink”.

Unfortunately, this child abuse-themed merchandise doesn't exist in its own 'child free adults get to do whatever they want' bubble. The sexual preferences of some adults to ‘play’ with the power relations of men raping their daughters cannot come at the expense of efforts to address and end child sexual abuse.

We do not believe anybody has to right to profit from normalising and eroticising child sexual abuse.

This is a campaign to hold Etsy accountable. What Etsy says and what Etsy does are two very different things. The platform presents itself as a marketplace for unique, handcrafted wares - "keeping commerce human". But they are just another sexploitative mega corp flogging factory produced child sex abuse material and child abuse themed merchandise.

Etsy child sex abuse-themed t-shirts and temporary tattoos with slogans like Harder Daddy and Daddy's little c*ck whore do not belong next to the 'I love Daddy' birthday cards, baby onesies and craft. Etsy has to make up its mind what it is.

Child sex abuse dolls constitute illegal child sexual abuse material. Individuals found in possession of these items face up to 15 years in prison and substantial fines. Nobody has a right to make money from selling child abuse material.

You’re just doing this for publicity

It is disappointing, although perhaps not unexpected, that those with vested interests have accused us of having ulterior motives in our efforts to hold Etsy accountable for profiting from child sex abuse dolls and other incest and child-abuse-themed merchandise. It says something about how little children and their rights are valued in our culture that we should have to justify a campaign to stop the sale of illegal child sexual abuse material and items that both eroticise incest and child abuse and suggest that girls invite and enjoy sexual abuse from their fathers.

Why do you show the images?

We know we walk a fine line. We find the images distressing also. And we see them in their original, uncensored forms. We understand the impact of being confronted by them. However, in our 10 year history – and with many successes under our belts in this time, including 17 wins in a row last year – we have seen the impact of exposing advertisers, marketers and corporates for their exploitation of women and girls in their products, services and ads. As a result of our decade of activism, we now have major global corporates seeking our help to ensure ethical supply chains and socially responsible practices.  We believe that this is, in large part, due to not being ‘soft’ in our approach. It’s not only the companies we campaign against directly who have been forced to change their ways. Every victory sends a message to other companies – this could be you in the firing line, so you’d better clean up your act. History will record that even when we don’t succeed, evidence shows we tried. A saying we particularly like is ‘You can’t bury the oil spill’.

Most of what we expose is accessible in the mainstream – in shopping centres such as Westfield (floor-to-ceiling pornified portrayals of women),  on popular social media platforms, such as Instagram, and on Etsy.

To those who criticise us for images we use, we do hope that they have directed a fraction of their concern to the company who creates and profits from these images, rather than shooting the messenger.

Having said that, we understand and respect if individuals no longer wish to see what we share in their feeds or email and need to step away for awhile or permanently.

Have you signed the petition calling on Etsy to stop selling incest and child abuse themed merchandise?