As reported by news.com.au

A PROMINENT child psychologist has called for a bra marketed to eight-year olds by iconic underwear company Bonds to be recalled from the market.

Dr Michael Carr-Gregg said the bra, called the Soft Cup Bra - which is mildly padded in a child's size eight - was an example of the "adultification of children".

"It blurs the line between what is a little girl and what is a woman, and in doing so violates an important societal norm that states that children should not be seen as sexual objects," Dr Carr-Gregg said.

"I call on the company to withdraw the product and if they don't, urge all parents to boycott them." Read more. 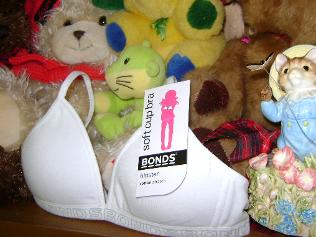