Following calls for BP service stations to stop profiting from sexist magazines, sexualising teen girls and encouraging sexual harassment, the service station chain has announced these magazines will no longer be sold in 350 of its company owned stores. 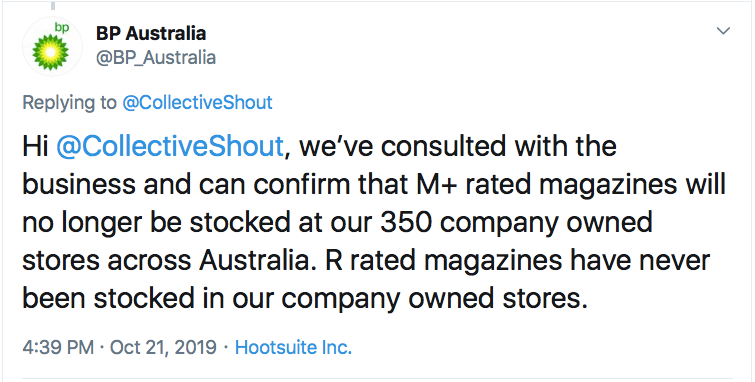 The move follows a successful campaign against 7-Eleven which also sold the magazines People and Picture. These publications include headlines such as “X-rated Aussie Teens”, referred to teenage girls as “fresh flesh” and promoted ‘nip slips’ and upskirting, which is a crime in Australia.

Following Collective Shout’s campaign, 7-Eleven CEO Angus McKay announced the magazines would no longer be sold in its 700 stores.

Collective Shout campaigns manager Melinda Liszewski alerted BP to new editions of the magazines via Twitter. Headlines on the covers include “BETTER THAN VIAGRA” and feature a photograph of a young woman in pigtails with the caption “I have no gag reflex.”

Ms Liszewski welcomed BP's announcement and said other retailers must take proactive steps towards a culture of respect for women and girls.

“We urge other retailers selling these magazines - such as Coles Express - to follow the example set by 7-Eleven and BP and cease the sale of ‘unrestricted’ pornographic magazines immediately."

Recent headlines seen in the magazines sold in Coles Express include “Huge Jugs! Holly’s hooters are on the loose.” In this same publication women’s tennis is described as “flashes of little white panties, sweaty thighs and jiggling tits.”

"Do women have to become PM to be worthy of Coles' respect?" Ms Liszewski asked.

“Some people say there’s more to women’s tennis than flashes of little white panties, sweaty thighs and jiggling tits. And they’d be right. Sort of.”

Do women have to become PM to be worthy of @Coles respect? https://t.co/qEifuQ0RtQ pic.twitter.com/h7PWVLZXON

“The display and sale of pornographic magazines in the public space creates a hostile environment for women and girls. Decades of empirical research shows this.

Sexual objectification and sexism creates a culture of violence against women. This is acknowledged in the Federal Government National Plan to Reduce Violence against Women and their Children 2010 – 2022."

Collective Shout thanks 7-Eleven and BP for their corporate social responsibility.