Last May we called out CafePress for selling slut and incest themed baby clothing. We weren't the first to do so, as US based activists like One Angry Girl had been campaigning against their pornified merchandise since 2004.

In the past, Cafepress have hidden behind their user generated system, claiming they will implement systems to solve the problem. They've known about the problem for years and they have done nothing.

This week, our campaign generated international media interest, with news media out of the UK, Canada, France and US. Cafepress is beginning to discover that sexploitation does not sell.

Campaign managers Melinda Liszweski and Cailtin Roper said the slogans made light of sexual assault and fuelled the sexualisation of children.

'Slogans like this make a mockery of sexual assault and undermines the efforts made by society to reinforce that there are boundaries,' Ms Liszewski said.

'We’ve been trying to say for a long time that if no consent is given, it's rape, and this reverses that. More than that, children are not capable of giving consent,' she said.

'I don’t even know how they place these items under freedom of speech. There are other freedoms that need to be protected including keeping children safe from harm. There is no freedom in fuelling sex towards children.' 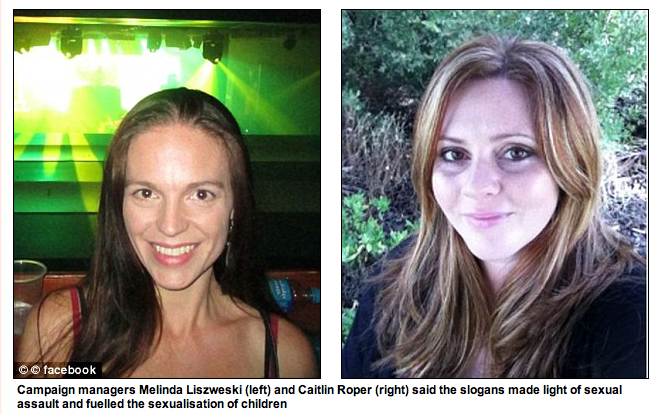 Australian equality campaigners have called for an American online retail company to remove products that they claim promote and encourage child sexual abuse.

The Twitter page for the American company, which has its global headquarters in Louisville, has been flooded with messages from social media users castigating the retail giant for allowing these products to be sold.

She continued, stating Café Press’s "pro-rape 'humour' trivialises crimes of violence against women," and reduces a global issue affecting millions of women every day to a "punch line of a joke".

AN ONLINE retailer is facing a backlash for its “sick” X-rated babygros, bibs and toddler T-shirts.

Collective Shout campaigner Caitlin Roper told news.com.au: “Last May we confronted Cafepress over their porn-inspired imagery and slogans on baby clothing. We came across baby onesies with slogans including “I love being a gang bang s***”, “Product of Mummy Daddy rape”, “No gag reflex” and perhaps even hundreds of similar sexualised slogans on baby clothing and merchandise.

“Cafepress seems to believe that members of the public should do their job for them, and spend their time filling out countless reports on their website. Typically they locate the items and withdraw them from sale, and within a number of days or weeks similar items pop up and Cafepress has taken no measures to prevent this.” 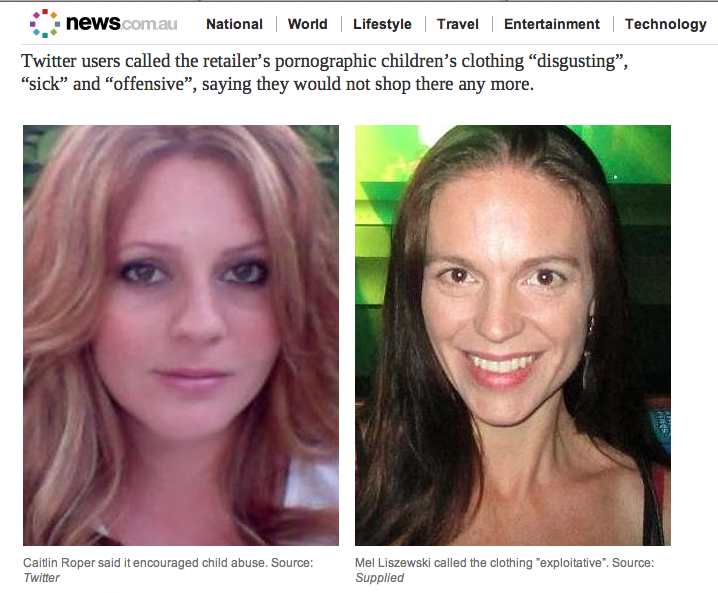 An online retailer selling baby clothing featuring pornographic slogans such as "no gag reflex" has come under fire from angry customers and campaigners calling for the offensive items to be removed from the company's website.

Australian-based campaign movement Collective Shout, who helped to successfully petition for the removal of controversial self-proclaimed pick-up artist Julien Blanc from the country, has now called for the removal of the baby and children's clothing from the US-based CafePress website.

Campaigns manager at Collective Shout, Caitlin Roper, said activists had been raising this issue with CafePress as long ago as 2004 and the company had failed to put any measures in place to prevent the problem reoccurring.

Ms Roper said despite removing offensive items as they are brought to the company's attention, there was nothing to stop additional items being made available due to a "robot-automated approval process" at the company.

Collective Shout co-founder Melinda Tankard Reist said CafePress was a "repeat offender" and activists had "been on their tail for years".

"They wait for everything to die down and then put up even more stuff. Why are they even hosting this content? Why is it our responsibility to bring this to their attention?" she said.

Ms Tankard Reist said she believed CafePress put profits before ethics but she was hopeful continued social media pressure would force the company to act in order to minimise harm to their brand.

Caitlin Roper, campaigns manager for Collective Shout who campaign against the objectification of women and the sexualisation of girls, tells HuffPost Lifestyle that it's not the first time that the company has been flagged up for selling sexualised clothing.

"CafePress have a long history of selling similar pornified items," she says.

Back in 2004, US based activist One Angry Girl received an email response from CafePress defending their sale of 'donkey punch' themed merchandise.

CafePress responded with the following email, stating that "'if you want to stop other people expressing views that you find offensive, CafePress is not the venue to use". 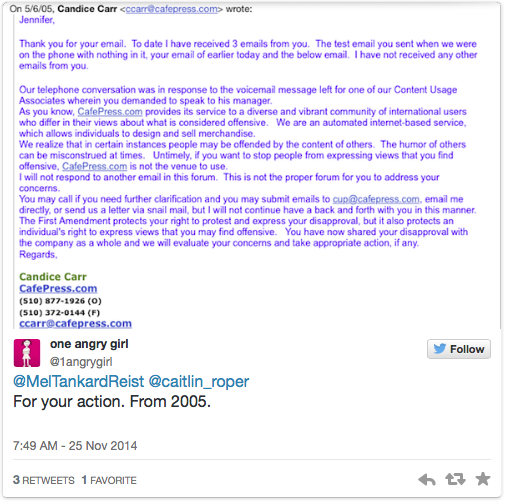 "But the issue goes further than baby clothing," says Roper.

"I hope most people can agree it is abhorrent to put incest and slut-themed sexualised slogans and imagery on baby clothes and this has of course attracted a lot of negative attention."

"However, I'm not incredibly heartened when the same porn-inspired and pro-rape slogans are featured on clothing for adults."