Caitlin Roper Writes For Good On You

It’s 2016, and yet women’s bodies are still being used to sell everything from beer to burgers to organ donation. Are we ok with this? Caitlin from Collective Shout gives us her two cents.

Hypersexualised representations of women in advertising and mainstream media are everywhere. Women are positioned as passive, decorative objects, are reduced to a collection of sexualised body parts, are defined by their sexual availability, and even depicted as victims of violence.

There is a strange dichotomy in fashion; the majority of fashion is created for women, and yet many of the exploited workers in the supply chains are girls and women. But the exploitation doesn’t stop there. Companies use ‘sexploitation’, sexism and the objectification of women, to sell products.

Many of us choose not to financially support exploitative companies- should this extend to companies who sexually exploit women in their advertising?

“Advertising is a very powerful educational force. Advertising’s influence is quick, cumulative, and for the most part, it’s subconscious. Ads sell more than products. They sell values, they sell images, they sell concepts of love and sexuality, of success, and perhaps most important, a sense of normalcy. To a great extent they tell us who we are and who we should be.”

What does this mean for women and girls?

When a woman’s value is determined by how hot she is and what she can offer to men sexually, this isn’t a good thing for females.

When women are reduced to sexual objects, when their value is based on their physical beauty and sexuality to the exclusion of other characteristics, skills, and attributes, this harms women. This objectification is at the roots of many forms of gendered oppression, such as sexual harassment, abuse, discrimination and violence against women. It reinforces women’s status as second-class citizens rather than intelligent, valued people with something real to contribute to the world and as such, undermines gender equality.

“Sex sells” is the all too common refrain, but it’s not really sex that is being sold – we’re not seeing men objectified and subjugated in these same ways. What is really being sold is the sexual objectification and subordination of women, and this should be cause for concern.

In fact, research by the American Psychological Association concluded that sex does not actually sell and that it does not help brand memory – it either has a negative effect on marketing or no effect at all.

Yet given all this, advertisers continue to use sexploitation to flog products. Sure, it’s lazy, lacks creativity, potentially alienates at least half of their potential consumer base and indicates a lack of confidence in the merits of their product. As the saying goes ‘If your product was any good you wouldn’t need sexism to sell it’.

At Collective Shout, we call on advertisers, marketers, media, and corporations to be better. We believe that companies have a responsibility to act ethically and to exercise corporate social responsibility to act in the best interests of women and girls. We even have our own Corporate Social Responsibility Pledge that we invite ethically minded companies to sign up to, pledging to not sexualise girls and objectify women to sell products and services. 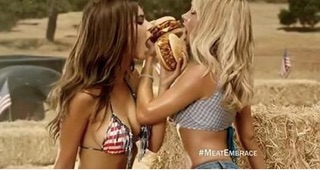 In the lead up to Christmas, we released our annual ‘Crossed Off’ list: a blacklist of corporate offenders who sexualized girls and objectified women to promote themselves during the year. We encouraged our supporters to vote with their wallets and refuse to financially support companies that sexually exploit women for profit – see also our Brands Page for a more comprehensive list.

It’s time to hold these companies accountable for their treatment of women and show them that sexploitation does not sell. Join us at Collective Shout to be part of our movement.

Caitlin Roper is Campaigns Manager at Collective Shout, a grassroots campaigning movement against the objectification of women and sexualisation of girls in media, advertising, and popular culture.

If you are part of a company that values women and girls, sign up to the
Corporate Social Responsibility Pledge today.

Trusted ethical ratings in the palm of your hand.

Get the Good On You app!

Originally published on Good On You