Chris Gayle, we won't 'move on' from your nationally televised sexism

As published at ABC Religion and Ethics and Melinda Tankard Reist

To sporting news now, and West Indies cricketer Chris Gayle has found closure from an incident this week in which he propositioned a female sports reporter live on air. 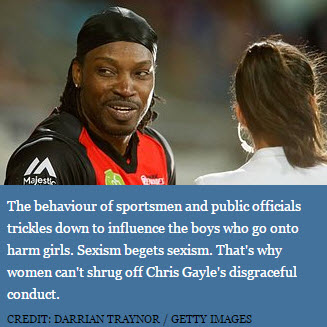 After making a pass at Channel Ten reporter Mel McLaughlin in a Big Bash post-innings interview, the 36-year-old opening batsman for the Melbourne Renegades appeared at a press conference at Melbourne airport earlier today.

Isn’t it wonderful that Gayle is able to move on and put it all behind him?

Unfortunately for him, a tidal wave of women everywhere won’t let him do that. Because, as women, we can’t just move on from the latest example of everyday sexism. Because it is women and girls who most bear the brunt of this behaviour every day.

And a “sorry” followed by “… if she felt that way” is not an apology. It’s victim blaming.

Gayle says there was no harm done even when explicitly told his actions have harmed her (“she’s pretty upset”). He chastises the questioner, “be quiet and let me finish.” Gayle doesn’t want to hear that this woman didn’t like his advances. His ego is damaged. He believed that because she was physically attractive and on his turf, she had to play by his rules. Her participation in sport as a woman, meant that she was inviting sexually loaded comments.

While others want to dismiss Gayle’s behaviour toward Ms McLaughlin as cheeky, as Gayle being Gayle (reminiscent of “boys being boys”) and (albeit it a short-lived tweet from Channel Ten’s sports account) “smooth,” others, including myself, won’t just let it go. Even when we are painted as overreacting and told to “calm down.” As my colleague Melinda Liszewski responded on Twitter: “Keep calm and let sexism win? I don’t think so.”

This is what Gayle said after being dismissed for 41 off 15 balls in the Melbourne Renegades’ win over the Hobart Hurricanes:

“I wanted to come and have an interview with you as well, that’s the reason why I’m here – just to see your eyes for the first time. It’s nice. So, hopefully we can win this game and we can have a drink after.”

This was not a bit of fun. It was an act of public humiliation on free-to-air television. As McLaughlin showed her discomfort, Gayle laughed at her displeasure and chided, “Don’t blush baby.” Telling her not to blush was both condescending and infantilising. Also disturbing were the audible sniggers from the commentary booth at Gayle’s performance, demonstrating that this was not one man’s private flirtation with a woman but a public display for the lads.

Gayle held her captive. He made a pass at her against her will on national television. She had no choice but to take the humiliation – his admission he’d virtually fantasised about being interviewed by her, his mocking laugher, his verbal touch-up. It’s not enough for him to admire her quietly. He has to make it public and she has to know it.

Channel Nine reduced all this to Gayle and other cricketers being “smitten” in a (since deleted but helpfully cached by Google) tweet. Is it too much to expect that a woman can perform her professional duties without being hit upon?

Channel Ten boss David Barham said he phoned McLaughlin who was angry and upset. Why wouldn’t she be? She turns up to work and gets harassed. Those making light of it don’t know what it is like to have this happen.

Respected Fox Sports journalist Neroli Meadows angrily described what it’s like to be harassed every day in your working life. She blasted Gayle for his behaviour, describing him as a repeat offender:

“We do not need that to happen to us in our workplace because that is what it is, our workplace and Mel has been doing her job for 10 to 15 years and she has done it with respect. Her career now gets defined by this.

An extreme outworking of disrespect for female sports reporters that is endemic to sports journalism, especially in the United States, is a practice where random men shout over a female sports reporter’s live piece to camera “I would f–k her right in the pussy” – which now has its own FHRITP meme.

Gayle’s response give an insight into how high-profile men hate being called out on their behaviour. In essence, his attitude is I’m allowed to be a pig and you’re not allowed to call me on it.

The former Cities Minister Jamie Briggs demonstrated this when he forwarded an image of the young public servant who made a confidential complaint about him, to his mates (one of whom leaked it to The Australian and who knows where else). This was followed by Immigration Minister Peter Dutton’s “mad f—ing witch” text, sent to News Limited journalist Samantha Maiden.

Women who speak out are to be shamed and made to heel.

We still have a long way to go before rhetoric in high places about respect for women results in a change in behaviour nationally. Sexism continues unabated at every level of culture and we’re still expected to take it as a compliment. Not to do so means you are weird.

Following an interview I did on Channel Seven’s Sunrise program yesterday regarding Briggs and Dutton, I received messages on my public profile Facebook page that my response was an overreaction. That I should preserve my anger for serious matter like rape, abuse and violence. But these behaviours occur on a continuum which begins with a lack of respect for women.

As Our Watch states, the most consistent predictor of support of violence by men is their agreement with sexist attitudes. And Victoria’s Police Chief Ken Lay has said: “Our culture is filled with men who hold an indecent sense of entitlement towards women…”

In most schools I address around the country, girls describe unwanted comments about their bodies, being pressured for sexual images, being touched inappropriately in the classroom and on the school bus. Some of these girls are 12 and 13.

The behaviour of public figures such as sportsmen and public officials trickles down to influence the boys who go onto harm girls. Attitudes affect behaviour. Sexism begets sexism.

That’s why, Chris Gayle, we won’t be moving on and putting what you did this week behind us anytime soon. (Nor, it seems, will Gayle’s club. The Renegades have now lobbed a $10,000 fine on him for his behaviour.)