Last week Lucy, one of our supporters, alerted us to Schick For Men’s sexist and objectifying new commercial and competition. The commercial depicted a young woman ripping off her t-shirt, urging viewers to ‘click here to see what happens next’. Upon following the link, viewers were directed to a video of the same woman, topless, with various objects obscuring her naked breasts from view. 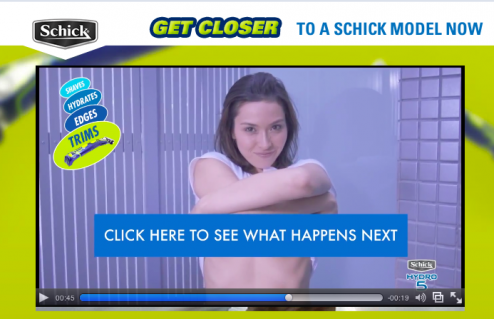 Using a topless woman or a woman’s breasts to sell male hygiene products is classic objectification.  Speaking to the media, WA State Coordinator Caitlin Roper commented,” People say ‘sex sells’. Sex doesn’t sell. Sexually objectified images of women’s bodies sells. It’s not new, it’s not clever, it’s not creative and if they have to resort to that, it leads me to think they’re not confident in the quality of their product.”

Alongside the advertisement was a competition inviting Facebook users to ‘get closer to’ the model of their choice, by having a picture of their face emblazoned across her t-shirt. We encouraged our supporters to hijack Schick’s competition by entering their own submissions reflecting a more positive view of women. At one point, our submissions outnumbered the serious ones. You can see the full collection of submissions here. 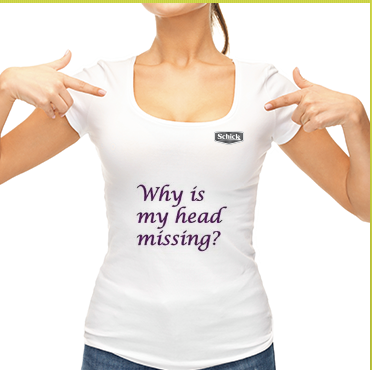 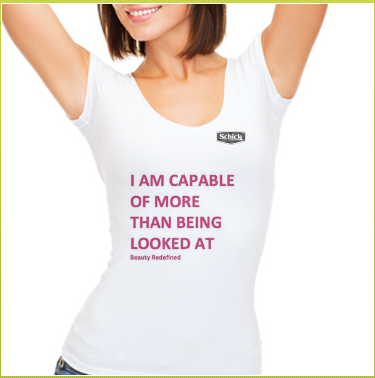 This isn’t the first time Collective Shout supporters have subverted similar sexist campaigns. Last year, we criticized Australia’s Next Top Model for their competition inviting young modeling hopefuls to post sexy photos of themselves on social media. We found entries of young and underage girls (one as young as nine) in sexualized poses, often even with identifying information such as their name and school. We called out ANTM for failing to protect these young people and for sending the message that women should be valued primarily for their beauty and sex appeal, and started our own #NextTopPredator hashtag.

We also ran a similar campaign in response to Mossimo’s sex-industry inspired ‘Peepshow’ competition. One of our activists, Nicole Jameson, won the competition.

Advertisers and marketers need to understand that sexism as a marketing ploy is no longer acceptable, and people will no longer tolerate the sexual objectification of women to sell unrelated products.

Sexual Objectification, Part One: What is it? by Caroline Heldman