Collective Shout: marking a year of speaking out against objectification

It was a comment about my book, Getting Real: Challenging the sexualisation of girls, which sparked the birth of Collective Shout: for a world free of sexploitation.

A contributor, Melbourne writer and blogger Tania Andrusiak (author of Adproofing Your Kids: Raising critical thinkers in a media-saturated world ) described the book as “a collective shout against the pornification of culture”. Those words leapt out at me. I liked the phrase so much, I thought it perfect for a new grassroots campaign movement which had been brewing in my mind and in the minds of some of my friends and fellow activists.

Research describing the harms of objectification and sexualisation was building around the world. The book was out. People were asking: what can we do?

It seemed the time had come for a strategic organised movement to equip and empower people to take action and support individuals already active against the onslaught of hypersexualised imagery, stereotypical, objectified representations of women and girls and the almost chic images of women subjected to violence.

So when Tania uttered those words – Collective Shout – I thought: that’s it.

In December last year a small team of women got together in Canberra to discuss the possibilities. We developed these goals:

Collective Shout is about naming and identifying the ways that women and girls are represented as sexualised, subordinate and submissive.

The movement has established itself as a serious, dynamic, agent for change. Collective Shout is now at the forefront of challenging the pornification of culture in all its forms.

In its first 12 months, the movement has achieved a number of significant wins. These include:

We’ve reminded companies of the importance of corporate social responsibility. We have put them on notice that if they do the wrong thing, they will be exposed and boycotted. The bodies of women and girls should not be seen as fodder for companies to exploit for profit. We’ve had great media coverage. Just this month, we’ve appeared in everything from Harper’s Bazaar to the Tumbarumba Times. Here’s some examples of recent coverage: 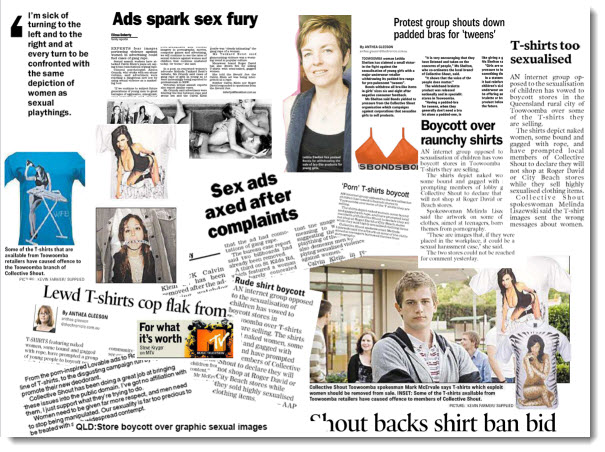 Collective Shout’s achievements were celebrated last weekend in Brisbane. Here are some pics from the night. Special thanks to Julie Gale, founder of Kids Free 2b Kids, our MC Erica Bartle, ‘Girl with a Satchel’ blogger, Margaret Keech, Member for Albert and Government Whip and Dr Robi Sonderreger, clinical psychologist, for your support and kind words on the night. Thanks also to all our sponsors, donors, musos and artists for your part in making the event special. Also to my CS colleagues and to Catherine Smibert for bringing it all together. 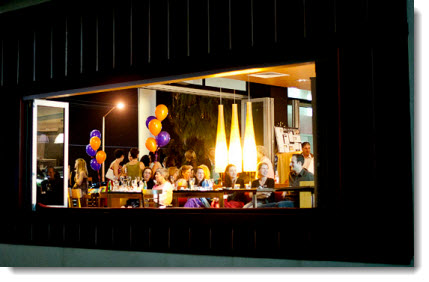 Watch the Collective Shout website for an announcement about our new “Crossed Off” campaign, which targets companies who have done the wrong thing and don’t deserve your Xmas dollar. Cross them off your Christmas List. If you haven't done so already, please sign up. And if you’d like to help us make an even bigger difference in the coming year, please make a donation on line through the website.

See: Winning the War Against Sexualisation by Miranda Devine