Community concerns about the sexualisation of society and the objectification of women should be key principles, says Committee

As published by Melinda Tankard Reist

The report was the result of the first major review to be conducted into the scheme since its introduction 15 years ago.

It was encouraging to see Collective Shout’s submission and verbal evidence get a significant run by the Committee. We are quoted more than 20 times on issues including pornographic magazines promoting sex with young girls, rape and incest, sold in corner stores and petrol stations, the failure of the advertising complaints system to address objectification and sexualisation, how self-regulation means the industry gets to do what it pleases, the effect of X18+ films on child abuse and abuse of women in indigenous communities and support for mandatory internet filtering of pornography.

I’m quoted as calling for a major overhaul of the national classification scheme:

with the primary goal of making it more effective in reducing the prevalence and availability of material in all media which contains images or words which reduce women to sex objects, which condone or celebrate sexual violence against women and which promote the sexualisation of children.

The Committee’s recommendations picked up a number of the key issues raised by Collective Shout. Our voices are being heard. 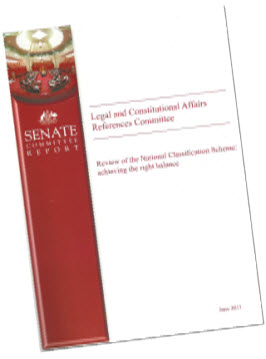 The Committee made a total of 30 recommendations which, if all implemented, would significantly improve the national classification scheme.

The two ALP senators on the Committee, Trish Crossin and Mark Furner, signed a dissenting report which indicated that they thought the Committee should have deferred to the national classification system review being conducted by the Australian Law Reform Commission at the request of the Attorney-General, the Hon Robert McClelland. However, they did concur with the rest of the Committee in recommending that “the Attorney-General should specifically direct the ALRC to consider, as part of its current review of the National Classification Scheme, all the findings, proposals and recommendations put forward in” the Committee’s report.

Collective Shout is now working on a detailed response to the ALRC review’s issues paper which asks 29 questions. We hope the ALRC will show the same readiness to hear our concerns about the objectification of women and the sexualisation of society as the Senate Legal and Constitutional Affairs References Committee has demonstrated.

Read our submission to the Senate committee here. (Submission no.65).