We love to see our supporters engaging in our campaigns and challenging those who profit from the sexual exploitation of women and girls.

Over the past few weeks of our campaign against Honey Birdette, we’ve seen some great actions taken by supporters. Here are some of our favourites:

As seen in Westfield shopping centres around the country: 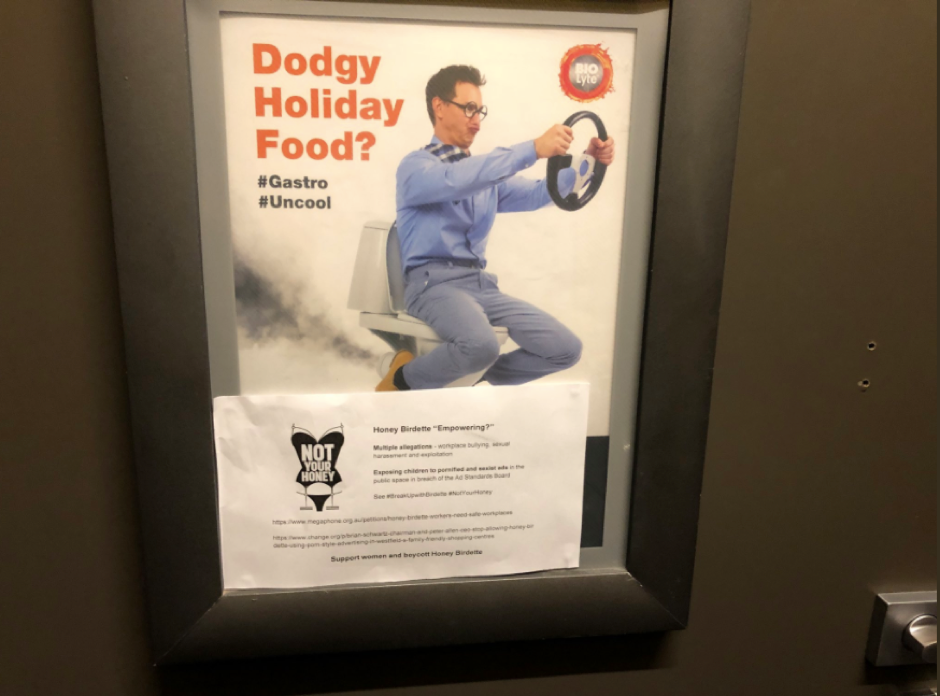 This photo was taken from inside a cubicle in the Ladies room at a Westfield shopping centre, where flyers documenting Honey Birdette’s sexism and exploitation of female staff were apparently distributed. 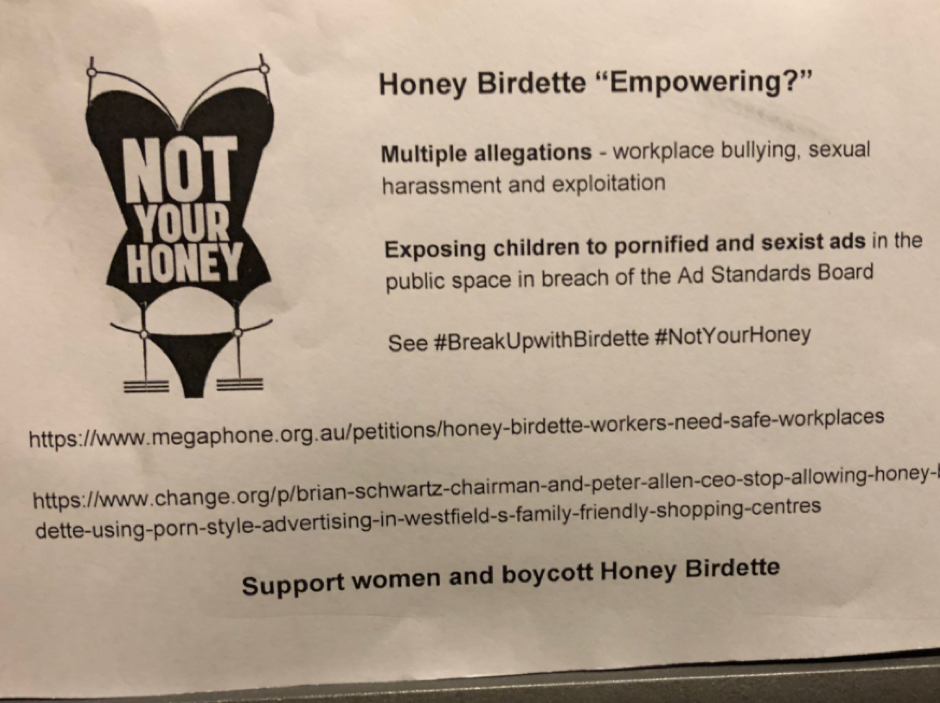 Other supporters have made phone calls and written emails to Westfield and Scentre Group, some of which were shared on our Facebook page.

I am one of the 55, 000 people who signed a petition to have Honey Birdette Advertising taken down as it is disrespectful and demeaning to women and is damaging to children. I ask that it is permanently taken down and that there is a review of all advertising in Westfield centres to ensure that it meets the advertising standards and does not sexually exploit women and children.

There is strong evidence to suggest that the way society portrays women contributes to negative attitudes about women and to violence against women. See www.ourwatch.org.au. I work in domestic violence and I see the everyday damage that misogyny does to women, children and families in our community. Honey Birdette advertising and other similar advertising is directly contributing to violence against women and children in our communities. I also have small children and I am a regular shopper at my local Westfield, but I was disgusted and humiliated at the Honey Birdette advertising. It is damaging to my son and my daughter. Please remove and do better.

I’m sure you would agree that all businesses have a social responsibility to ensure that their openly displayed products and advertising etc do not impact on the impressionable and developing minds of children, as well as its customers.

I understand Honey Birdette has been remarkably persistent in displaying pornographic inspired advertising in their shops which is freely seen by customers walking past and also by children. This is not acceptable.

I’m surprised that Westfield Centre Management appears to have no set promotional and advertising standards to ensure that the businesses within their centres are not impacting negatively on its customers, and particularly upon impressionable children.

I urge you to work out set standards for advertising and promotions within your centres. Unfortunately, Honey Birdette has repeatedly shown their disdain for the customers and children who use your centre, and obviously don’t have a good advertising standards of their own. It also demonstrates that they care little for Westfield shopping centres, its management and other businesses that use your centres.

It may seem like a ‘bit of fun’ or a joke, but exposure to sexualised imagery, particularly those that show women as sex objects have proven repeatedly to have a negative long-term and permanent impact upon children and adults.

It’s great to see Collective Shout supporters participating in activism, and more than that, the support and engagement of Collective Shout members is critical in achieving meaningful change- so keep up the great work and together we will fight the sexual exploitation of women and girls!