Australia’s system of ad industry (self) regulation relies on members of the public making complaints. Ads are only investigated by Ad Standards once a complaint has been made. But there are a number of reasons why members of the community might not make a complaint about a sexist or sexually objectifying ad. First, they have to go to the time and effort of making the complaint. Next, they have to answer an increasing number of questions on Ad Standards website before even being permitted to lodge a complaint. Once they have made the complaint, and after waiting for several weeks while the advertising remains in place, complainants often have to endure the frustration of having their complaints dismissed for some trivial reason and wondering why they went to the trouble in the first place.

One Collective Shout supporter, Anna*, who lodged complaints over pornified Honey Birdette ads displayed in shopping centres was referred to as a “lunatic” by Honey Birdette:

Please note this is the fifth complaint I have taken the time to answer from this complainant. I am not wasting any more time answering anymore from this person – our time working on female empowerment and helping them love their bodies is far too valuable to be answering repeatedly to lunatics. 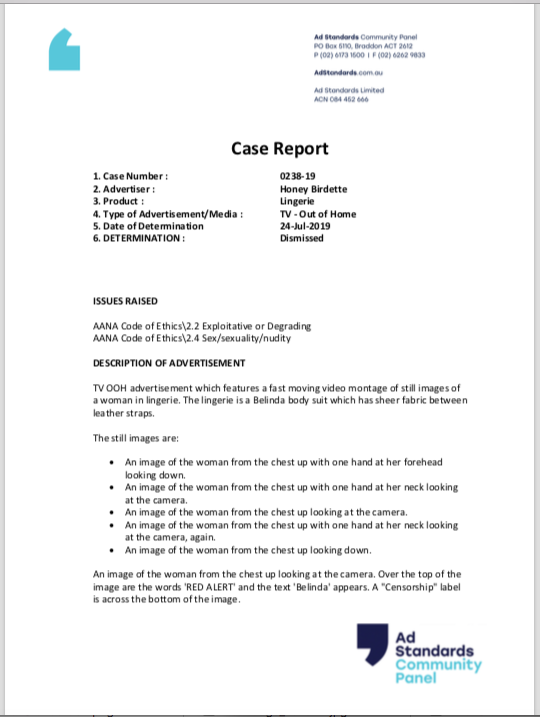 When I read the comments from Honey Birdette in the case report, I immediately felt humiliated and then confused: did the advertiser actually know who I was, as in my name and where I lived? I felt Ad Standards had abused its position by transmitting an intimidating and abusive message from the advertiser to me. I felt my complaint - a genuine objection to a pornified portrayal of a woman in my community - was delegitimised, and to read what in essence was a character assassination in the final case report really made me lose faith in the entire complaints review process.

After we called out Ad Standards on Twitter for facilitating the abuse of a complainant, and emailing a copy to her, they quietly edited the document on their website. Read the original, unedited version here.

Another supporter, Louise*, who made a complaint about a porn-themed Honey Birdette image captioned “the ultimate bondage babe” expressed her disbelief after coming across a Courier Mail article solely dedicated to attacking her complaint. “Furious” Honey Birdette founder Eloise Monaghan slammed the complaint, and suggested the complaints were all coming from the same person. Louise said:

As I read my own words in the news article, taken from a complaint intended for Ad Standards – not a public news outlet – I felt my anxiety levels rising. Eloise Monaghan publicly painted my complaint as frivolous. I felt attacked and humiliated. If this is what happens to people who make complaints to Ad Standards, I can’t imagine many people would want to continue utilising the complaints process after this kind of treatment.

It should go without saying that members of the community should not be punished for reporting sexist and porn-inspired advertising, yet as Ad Standards allows advertisers like Honey Birdette to transmit abusive messages to complainants, this is the inevitable outcome. But if members of the public are intimidated by advertisers and deterred from making further complaints this is a win for Ad Standards, who can cite a decrease in complaints as evidence of 'community standards' where sexist ads are tolerated. Essentially, they can claim that fewer complaints means only a few people object to sexist and sexually exploitative depictions of women, and justify dismissing complaints on this basis.

Ad Standards has a responsibility to, at the very least, not facilitate the abuse of complainants by unethical corporates like Honey Birdette. Why publish insults from advertisers in their case reports at all?

But we don’t expect any better from Ad Standards, which goes to great lengths to justify sexually objectifying and exploitative advertising. We’ve said it for ten years, ad industry self-regulation is a dismal failure.

*names have been changed