Complaints against Rivers '10 deadly deals' upheld by the ASB

Complaints against Rivers '10 deadly deals' catalogue cover have been upheld by the Advertising Standard Board.

Collective Shout had exposed Rivers eroticisation of violence against women last month after supporters found the catalogue included with their local newspaper.

Our supporters began writing to Rivers  and to the ASB to voice their objection to the use of violence against women as a marketing tool. 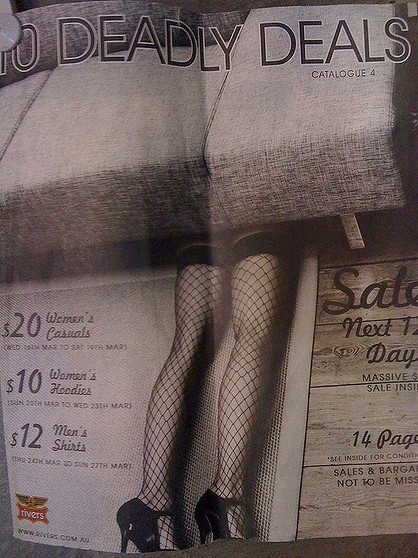 Rivers initial response was that they didn't intend to cause offense. Rivers had more to say however when contacted by The Age. They described Collective Shout's interpretation of their catalogues as 'weird and draconian' but didn't offer any alternative interpretation. Was Rivers 'intention' to depict a woman looking for her keys? We'll never know!

Rivers claimed they had been 'singled out' by Collective Shout, pointing to the unethical behaviour of others in the fashion industry. Collective Shout is well aware of other companies which degrade and objectify women – even a brief look at our website would demonstrate that. The fact that 'others are doing it too' does not excuse Rivers own contribution to a culture that trivialises violence against women.

Rivers also point out in the ASB's determination:

Something that the complainants are clearly not aware of is that through our point of sale system in our stores, we allow (and in fact encourage), our customers to donate their change from a sale to the registered charity “Mercy Care”, which seeks to provide crisis accommodation to women and their accompanying children who are victims of family violence during times when refuges are closed.

The implication here is that if complainants were aware, they would not be complaining about the catalogue. Using violence against women to sell products is never acceptable and giving to a charity doesn’t whitewash their actions. It is ironic that Rivers are seeking recognition for their customer's donations to this charity while using violence against women to increase their own profits.

Rivers have passed up a great opportunity to go against the tide of sexploitation by apologising and making changes to their marketing strategy. Collective Shout and other groups concerned about objectification and violence against women will now be voting with our wallets and not shopping at Rivers.

The full determination can be found here. [UPDATE] Rivers appealed the Ad Standards Board determination and the Independent Reviewer recommended that the ASB have another look at the issue. The complaints were subsequently dismissed. Read the determination here.

It is worth reading to see all of the great comments sent to the ASB from complainants. Well done to all who made their voices heard on this issue.

The Age - Rivers campaign 'a deadly deal for women'