Would you like bigger boobs with that? Cosmetic surgery ads shown at McDonalds family restaurant

"Super size me" has a new meaning

I planned an evening out with my young son to reward him for a recent success at school. I asked him where he would like to go and like many children his age, he chose McDonalds, so off we went.

We ordered and sat down with our food and the Happy Meal promotional gear for the Minions movie. A helpful staff member asked if we'd like some colouring in pencils and extra activity pages. Yes we would. It was nice to sit together and colour in before heading out to the playground.

Before we could do that, I noticed a large TV screen mounted on the wall with rotating images, advertisements for local businesses. But one ad stood out from the rest. I took a photo quickly and discreetly as I wasn't keen to draw my child's attention to it. So the ad for breast implant surgery illustrated by a naked torso is a little blurry.

For the rest of the evening I was increasingly annoyed as I saw the image pop up again and again.

Later that evening I tweeted the photo to McDonalds, letting them know what I thought of them advertising breast implant surgery at their store. McDonalds markets itself as a "family restaurant" and with toys and a playground, it is a child magnet. People don't expect to see this objectification of women at McDonalds. Given the make up of McDonalds customer base - men, women, children, families - why would anyone think this was an appropriate venue to advertise breast implant surgery? 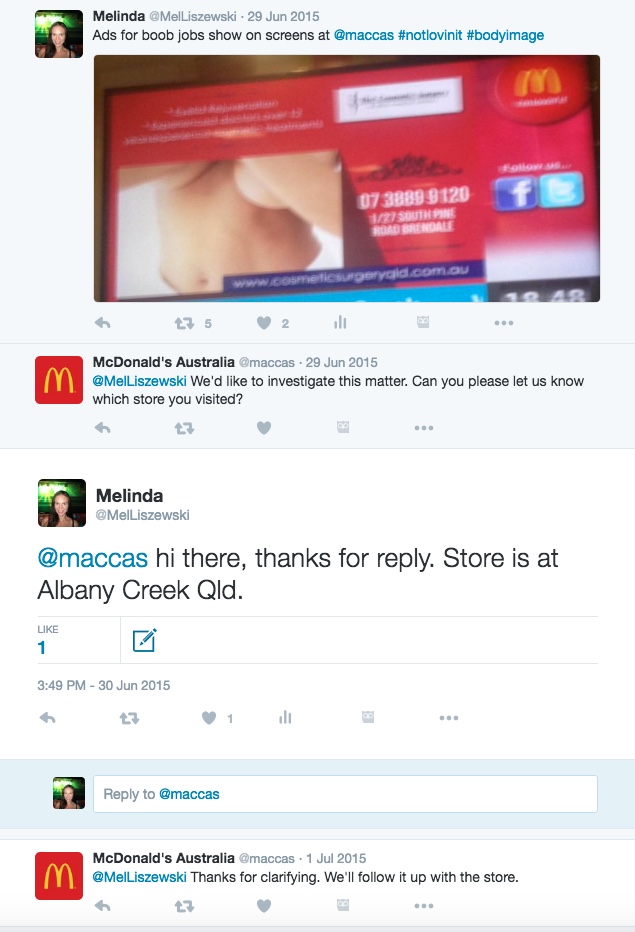 Girls are growing up in a culture that is wall-papered with sexual objectification. Media, marketing and advertising tells girls their physical appearance is the most important thing about them, but they just don't measure up. They're not pretty enough, not thin enough or desirable enough. This make-up, these diet pills, this surgical procedure will fix it all because girls, you need fixing.

Is it asking too much for a "family restaurant" to not be yet another platform for these harmful messages?

McDonalds responded to my tweet by saying they would follow up with the local restaurant. I was pleased to see this response, but I hope McDonalds does more to make sure all its restaurants are free of sexual objectification.