Last year we exposed global dancewear company California Kisses for posting sexualised images of underage and even pre-teen girls on their Instagram - images that attracted hundreds of comments of a sexual nature from adult men which CK failed to even moderate. 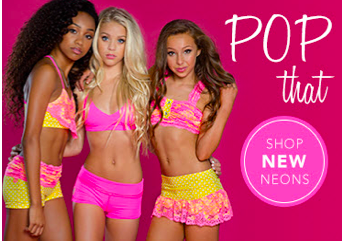 But it seems the message is not getting through. Yet another dance wear company (which also sells swimwear) is regularly posting sexualised photos of underage girls on its popular social media account. Frilledneck Fashion is an Australian company trading online internationally.

Note how the young girls pictured are dressed, styled and posed. Even when dressed in dancewear, girls are not depicted dancing (see the image above of the girl in red lying supine with an arched back.) Clothing is designed to emphasise certain parts of the body, drawing attention to adult, sexual features children do not yet possess. Girls replicate poses and sultry facial expressions that would be common in sexy adult female models. There are many other examples of even younger girls we have chosen not to show

It is important to remember also that these images are carefully constructed. Every detail is deliberate, designed this way to sell a product. This is not about girls’ self-expression, this is about adults directing them children in costuming, how to pose and how to look at the camera. This is not how children look playing at the beach.

This comes in the wake of advice from E-Safety Commissioner Alistair MacGibbon, who warned that images on children online were increasingly being co-opted and misused by paedophiles. Does Frilledneck Fashion not care about where images of its young models might end up? 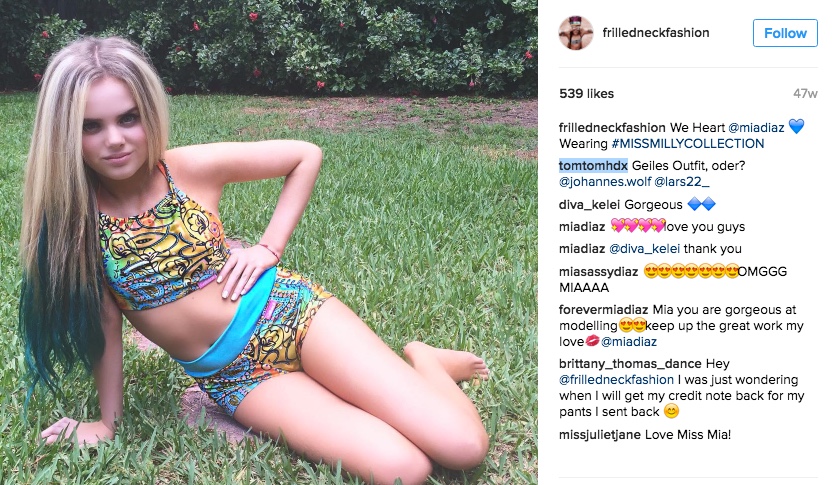 - a person’s value comes only from his or her sexual appeal or behavior, to the exclusion of other characteristics;

- a person is held to a standard that equates physical attractiveness (narrowly defined) with being sexy;

- a person is sexually objectified — that is, made into a thing for others’ sexual use, rather than seen as a person with the capacity for independent action and decision making; and/or

- sexuality is inappropriately imposed upon a person.

Sexualisation is not the same as healthy sexuality, or natural, age appropriate curiosity and discovery. Child directed play, dress ups and trying on mum’s lipstick and high heels does not constitute sexualisation. There are several common misconceptions or defences for sexualisation we've addressed below.

"Sexualisation is in the eye of the beholder"

Micki Wood, mother of US child beauty pageant star Eden Wood, made this same argument in response to child advocates and health professionals who spoke out against sexualising and exploitative pageants, claiming that if an individual looks at a child and thinks 'sex' the problem is with them. At this time Eden was six years old and famous for her Vegas showgirl routine.

This notion that viewers are simply choosing to view children though a sexualised lens is a deliberate misrepresentation of the issue, one that obscures reality in such a way as to let advertisers and marketers off the hook completely, as if deliberately contrived ads somehow happened by accident and viewers are seeing something that isn't there. This argument is either disingenuous or indicates a lack of understanding into the significant global body of research into the harms of sexualisation. (See our resources page for more.)

A common refrain is that to acknowledge sexualised clothing is to ‘shame’ girls for their choices. The fact is, the sexualisation of girls has very little to do with girls choices, and much more to do with adults- companies, advertisers and marketers- whose financial interests are at stake, as can be seen here- corporations who make choices to sexualise girls for their own financial gain.

Calling out retailers that manufacture and sell padded push-up bras and g-strings for pre-pubescent girls, clothing and underwear with sexualised and suggestive slogans and merchandise embedded with the logo of global pornography brand Playboy is not shaming girls. It is holding these companies accountable.

Another accusation from sexualisation deniers is that accurately labelling children’s clothing as sexualised is tantamount to arguing children are inviting sexual attention or even sexual assaults from grown men. Identifying sexualisation and outlining the harms for girls is in no way suggesting girls or victims are responsible for crimes against them. What the research does indicate, however, is that the sexualisation of children may play a role in ‘grooming’ children for abuse.

Dr Emma Rush, co-author of Corporate Paedophila report said, “Premature sexualisation also erases the line between who is and is not sexually mature, and as such, may increase the risk of child sexual abuse by undermining the important social norm that children are sexually unavailable.”

The American Psychologial Association concluded that “Ample evidence testing these theories indicates that sexualisation has negative effects in a variety of domains, including cognitive functioning, physical and mental health, sexuality and attitudes and beliefs.”

We contacted Frilledneck in early June with our concerns. So far they have ignored us.