Does the Human Rights Commission really care about gender equality?

Last month I wrote about Caitlin Roper’s campaign against pornographic t.shirts and featured an interview with the young Western Australian woman and sociologist Michael Flood on the subject.  One of Collective Shout’s most active members, Caitlin had attracted a list of heavy hitters –including Noni Hazlehurst, Steve Biddulph and Dr Joe Tucci - to a statement condemning the proliferation of porn-themed shirts and calling on retailers to choose corporate responsibility over profiting from hyper-sexualised and violent images. Caitlin also recently wrote to leading asking them not to stock these t.shirts. One reply was received, from Bernie Brookes, CEO of Myer, who wrote: “I have copied and circulated your information to our product designers, developers and buyers to assist them in the understanding of the Collective Shout’s stance.” Not exactly what you’d call a commitment, but at least he’s responded. Caitlin is justifiably frustrated. She said in an email: 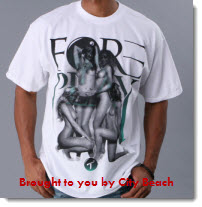 am coming up against this problem more and more, people complain to the stores who really don't care, complain to centre management, sometimes a local politician, particularly if it includes violence…People keep asking me on the fb page who can we write to? There is definitely community concern, but I don't know what to tell them, I find new disgusting t-shirts every day, often including violence against women. What about the government initiative 'To violence against women, Australia says no'? Surely t-shirts that advocate for the opposite go against that campaign?”

Caitlin decided to ramp her campaign up a notch, with a complaint to our Human Rights Commission. I’d like to tell you our pre-eminent Federal human rights body stepped in to defend the rights of women, recognising that these images degrade women, contribute to sexual harassment and excuse violence against them. I’d like to say HRC acknowledges that men aren’t depicted naked, bound, gagged, with their legs spread on t.shirts. I’d like to say HRC raised with City Beach the fact that you would not be allowed to download these images in the workplace, or display them in posters in an office, so why can they be hung on racks and sold openly in a workplace? But it seems it was not much more than the opportunity for Caitlin to express her views: no action was taken. HRC appears to be powerless. Here’s Caitlin’s account of what happened:

I completed the forms detailing my concerns, citing specific t-shirts that I had included pictures of. A representative from the Human Rights Commission was assigned to my complaint. The representative is responsible for communication between parties, and acts as a mediator to help resolve conflicts. However, they do not have any power to compel the respondent (in this case, City Beach) to take any action.

I received City Beach’s official response to my complaint from their lawyers. It acknowledged my complaint and disagreed with my interpretations of the shirts. I have included a portion of the letter here:

“We have examined the sections of the Act which you have referred our client. It appears to us that the only section which could have possible application in the circumstances of the complaint is subsection 22(1)© which sets out, relevantly, that it is unlawful for a person who provides good to discriminate against other person on the grounds of the other person’s sex in the manner in which the first person provides the other person with goods. Our client disagrees with the conclusions which have been reached by Ms Roper as to the connotations of the images in question. In particular, our client does not agree with the accusation that the pictures in question were ‘generally of women in sexual poses and appeared to be the same pornified style that would appear in a soft porn magazine’. Simply, in our client’s view, that is not the case.

In our client’s view, the images in question are of attractive women. The images are not, in our client’s view, pornographic. Further, our client does not believe the images in question could reasonably or objectively be described as pornographic. Further, Ms Roper has referred to images of naked women. Our client does not display images of naked women in its retail outlets. The conclusions which Mrs Roper has reached in relation to the meaning of the slogans to which she refers in her complaint are, in our client’s view, unrealistic and not a normal or fair interpretation of those slogans. Additionally, Ms Roper’s conclusion that an image depicting a woman with a scarf covering her head makes that person less human is not a fair or reasonable interpretation of the image. Our client has given Ms Roper’s complaint serious consideration but in all of the circumstances does not agree it has been guilty of sexual harassment as complained of by Ms Roper. Unless compelled to do so, our client does not intend to participate in conciliation. Our client’s stance in this regard is that it does not believe conciliation can achieve an outcome satisfactory to both parties. This is the case as the outcome which Ms Roper seeks is that the items in question be removed from sale. Our client is not prepared to voluntarily do so.”

The HREOC representative informed me that as City Beach was not open to having a conciliation to resolve the outcome, I could try and reach a compromise with City Beach. He suggested “thinking outside the box”- which I did, maybe a little too much for CB’s liking.

My possible compromises were:

To put a warning at the front of their stores, warning parents of ‘adult material’ inside.

To apply some kind of age restriction to the t-shirts, a minimum age for purchase.

To attend a “Right to Childhood” conference.

Unsurprisingly, they rejected all of my suggestions. CB had made it clear they were not interested in participating in a conciliation, a conference where both parties try to find a reasonable outcome.

The HREOC representative suggested they might be open to a conversation, where I could explain my concerns to them and they would respond - with the understanding that they were not going to take any action. I would speak first, then a CB representative would respond, and there would be occasion to interact with questions. I agreed to keep the proceedings of the discussion confidential, however I am comfortable sharing some of the points I raised. I referred to the open letter to retailers and read parts of it aloud. I spoke about the way the women on the t-shirts are frequently objectified and posed as porn stars. (In the case of the TITS brand, the models are actually famous porn stars, not just ‘attractive women’ as City Beach claimed.) I spoke about my concern about the element of sexualized violence that is so often present and women gagged, while citing specific examples of t-shirts sold in their store. I spoke about how these images promoted disrespect of women and also made me feel vulnerable and less secure. I also shared my concerns about the images being imposed on the general public, including children, and some of the research and progress in other places (like the UK) in terms of recognizing exposure to sexualized imagery is damaging to children, and taking action. I asked the representative from CB to learn more about these issues and take account of the community concerns. While City Beach has not removed the clothing, and I don’t think I ever really expected them to, I feel satisfied that I made this complaint and forced them to hear me. Utilizing their lawyers and having to deal with my complaint was probably a bit of a headache for them, and I hope it has made some impact on what the buyers for City Beach might select in the future.