It has been reported that a prominent outdoor advertisement for 'Puppetry of the Penis' at the Eatons Hill Hotel has sparked complaints from the community. 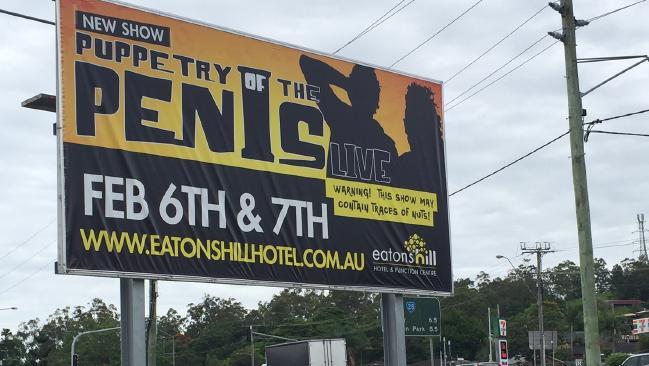 This should not be surprising - the sign is placed in a prominent position along a main road and is completely unavoidable.

The director of Eatons Hill Hotel Rob Comiskey has rejected complaints and compared the billboard to radio:

“You listen to commercial radio and they say a lot worse every day, but do you turn your radio off?”

Apparently Mr Comiskey views commercial radio as compulsory listening, however the answer to his question is YES. Many people do turn off their radio. We don't have that option with his billboard.

It is difficult to understand why anyone would insist on advertising a show about men manipulating their genitals to an audience broad enough to include children. More baffling is the idea that this action would be consistent with an advertising 'code of ethics.'

Collective Shout has long argued that self-regulation does not work. It serves the interests of profit-driven industry, not the community. Corporates like the Eatons Hill Hotel use ad industry self-regulation to their commercial advantage. Members of the community should not have to spend their time moderating the behaviour of unethical corporates which then profit from the 'controversy' they deliberately generated.

Having said this, silence is not an alternative. It is still vitally important to get your complaint on record. It has been reported that the Ad Standards Board has received 10 complaints - you can add to that number here:

Click here to make a complaint to Advertising Standards Board

Tim Mander MP is the state member for Everton, an electorate that includes the suburb of Eatons Hill. Send a short, polite email with your complaint about the Eatons Hill Hotel 'Puppetry of the Penis' ad. Ask what he can do to advocate for stronger ad industry regulation.

Eatons Hill is situated in the Moreton Shire region. Contact Moreton Shire Council, let them know that the Ad Standards Board is insufficient in dealing with complaints about the 'Puppetry of the Penis' billboard and ask what they can do to have the billboard taken down. It might be helpful to include a link to the quest news article in your correspondance: