It was a moving film which had me laughing one minute and then on the verge of tears the next.

There were so many themes unpacked throughout the film; post-baby bodies, our relationship with food, eating disorders, depression, self harm, media and advertising, cosmetic surgery, sexualisation and adultification of children; and each theme deserves an individual analysis of its own.

However one situation really stood out to me.

The Australian Classification Board has only just recently given the film an MA15+ rating due to what they have described as "protruding labia" during a 12 second scene where a professional shows a small sample of women's vulvas, all of which are different, and all of which are normal and healthy.

Taryn states on her website: "I am shocked and outraged that the Board has deemed Embrace unsuitable for under 15 year olds for showing in an educational and informative context the range of ways a woman’s body can look. The whole point of the classification system is to protect minors from being exposed to harmful content, but what exactly is the board protecting them from? This is not rude or crude, this is natural, this is life."

“An M rating (stipulates) that nudity must be justified by context. The nudity in my film is completely in context."

This would have been a really good film for mothers to take their 13 and 14 year old daughters to. To teach them about body positivity and acceptance at such a crucial time in their lives.

Earlier this year the ABC reported that thousands of women "every year submit to costly and potentially risky labiaplasty - a surgical procedure to remove or reduce the size of the inner labia - in a bid to achieve the neat, "single slit" look promulgated in media images."

What hope do women and girls have of feeling comfortable with their own bodies when the only version they are exposed to is the highly photoshopped pornified version?

The survey of 443 Australian GPs found a third have seen patients aged below 18 wanting to trim or shape their genitalia. Almost all the doctors surveyed said they had seen women of all ages express concerns about the appearance of their genitalia."

There is more than just one body type than the narrow stereotype commonly pushed by the media. I love this quote from our friends at Beauty Redefined: 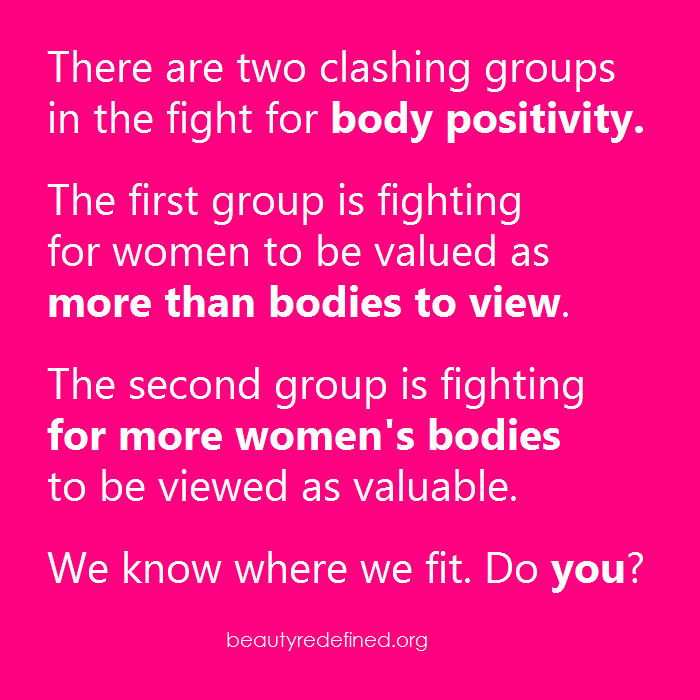 Yes we want diversity but we also want to be valued as whole people.

So for 86 minutes last night I could laugh and cry in a safe space surrounded by my colleagues. But after the film ended we stepped out into a patriarchal world where we are drowning in the uphill battle to be recognised as whole people and not just the sexualised sum of our parts.

I hope that this film continues to push the conversation into the mainstream.

I hope that people of influence within corporate organisations are inspired to change the way they market to society and sign our Corporate Social Responsibility Pledge.

Embrace opens around the country from August 4

Sex Sells, but at What Cost?