It's not the first time Facebook has come under fire for inappropriate or illegal content.</p>

Last year pages such as “You know she’s playing hard to get when you’re chasing her down an alleyway” were criticized for being “hateful, threatening [and] inciting violence”. Following global protests, Facebook finally responded, ruling that potentially offensive pages may remain if tagged as comedy or satire.

Since then, Facebook content has only become more graphic. Facebook is now being used to advertise escort services selling people for sex, as well as various pages promoting pornographic imagery and even pages like ‘Jail Bait’ promoting illicit sexual behavior in regards to minors.

“I found this [escort service] advert totally unacceptable – it seems we can’t avoid pornography in our daily routines – not only on Facebook but also advertising in the general media.

“I then checked out Facebook’s policies which seem to proscribe against such pages, but when we reported them, Facebook said that these pages didn’t violate their policies.

“This response made me want to do something – I just couldn’t sit back any longer. It is not just adults using Facebook, the network is billed as a family platform and I have two children who both use it.” Read more here. 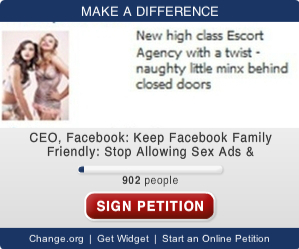