Violence is the New Black: Fifty Shades of Abuse

"Every fairy tale has a dark side." 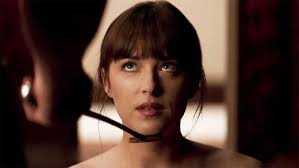 But if, as the promotion claims, this second instalment is the "dark side" of the "fairy tale" does this mean that every little girl secretly desires to be whipped, choked, harassed, stalked, manipulated and made to suffer physical and emotional injury at the hands of her prince?

After all, Anastasia is subject to this and more in the first instalment, which I saw - along with a cinema full of schoolgirls in uniform.

And herein lies the problem.

Abuse is served up to young women as romance: the first film was released on Valentine's Day two years ago; the second in the lead up. Why say it with roses when you can say it with whips? In Fifty Shades of Grey Christian tells Anastasia that if she were his she wouldn't be able to sit down for a week (because of the damage he would do).

This is a fairy tale in which the female lead is beaten with a belt and covered in bruises as tears stream down her face. Soothed only by his strong jaw, his baby grand, sports car and helicopter.

The film's trailers pose the question: "Can love survive?" - meaning, of course, that Fifty Shades of Grey was about just that. Because nothings says true love like being controlled and stalked.

Fifty Shades is part of a wider culture in which women are taught their greatest power comes from being an object of male desire. We see a powerful man, corporate power player Christian Grey (Jamie Dornan) prey on a naive university student, Anastasia Steele (Dakota Johnson) whose virginity is a problem to be rectified. He proceeds to groom her for his sadistic pleasure. Sexual violence and emotional abuse - including threats, stalking and isolation - are represented as sexy and romantic.

What is in reality intimate partner violence becomes something women secretly desire - which puts all women at risk.

The first film depicted sexual violence - forced sex acts, contact against Anastasia's will (stalking) and the use of alcohol to compromise consent. Anastasia Steele signs a contract in which she agrees to be submissive and meet Christian Grey's every wish - and not just for the sex acts he wants. His specifications include what she can eat, how much she can drink and how she behaves at all times.

When unequal power relations and female submission are presented, not only as somehow romantic and desirable but as actually liberating and empowering, you know you've got a serious problem.

In her analysis of the first volume of the Fifty Shades series, Amy Bonomi from Michigan State University reported on research undertaken by her department:

"Our systematic analysis of Fifty Shades of Grey, the first novel in the trilogy, reveals pervasive emotional and sexual violence in Christian and Anastasia's relationship. Our analysis also shows Anastasia suffers significant harm as a result - including constant perceived threat, managing/altering her behaviors to keep peace in the relationship, lost identity and disempowerment and entrapment as her behaviors become mechanized in response to Christian's abuse.

"Christian uses an interlocking pattern of emotional abuse strategies - stalking, intimidation, isolation, and humiliation - to manipulate and control every aspect of Anastasia's behavior. These strategies are consistent with the U.S. Centers for Disease Control and Prevention's definitions of intimate partner violence."

The broader culture effectively grooms women and girls for pornography consumption. Women imbibe a message that adopting pornified roles and behaviours is how they will attract men, keep men interested, stop them "wandering."

One repercussion is that women start to think there is something wrong with them if they don't like this stuff. And teen girls think this is what "romance" looks like. So many young women describe coercion and pressure to accept sex acts they neither desire or enjoy. This film just adds to that pressure. I've had year 7 girls at an Anglican school ask me questions about BDSM. They want to know if a boy wants to whip them, choke them and tie them up does this mean he must really like them? Stalking comes to be seen as a sign of affection. I've read messages from boys on Facebook threads about the film saying how great it is because now they can get girls to do what they've always wanted them to do.

How will our young people understand what true intimacy and authentic human connection looks like when porn-based messages about sex dominate their formative environments?

Collective Shout has partnered with Culture Reframed, London Abused Women's Centre and the National Centre on Sexual Exploitation, with the support of dozens of other groups around the world who are committed to ending male violence against women. We have recently issued a joint statement in which we said:

"Girls around the world are born into a pornified culture where consent is rendered irrelevant. In real life, men use the same tactics as Christian Grey in the Fifty Shades trilogy to gain and maintain power and control over the women in their lives. This includes isolation, threats, physical and sexual assault. This is not entertainment. This is not sexy. This results in serious harm to women and in the worst case scenario, murder."

We don't have to see it. But any depiction of violence as romantic harms us all. As we say in our 50 Myths post: "Fifty Shades is a massively popular cultural phenomenon, perpetuating and reinforcing harmful attitudes about violence against women. Women cannot simply opt out of a culture that exploits or harms them."

This is about raising awareness of the film and domestic violence. We want people to recognize that Fifty Shades glorifies abuse of women, and to ask themselves whether that is something they really want to support financially.

We are calling for potential cinema goers to put their money toward financially supporting some of the frontline services for women that are so desperate for funding instead. My friends who work in the women's refuge sector tell me that their refugees are full of the victims of the Christian Grey's of this world.

To get behind this campaign, you can participate on social media by using the #50dollarsnot50shades and #FiftyShadesIsAbuse hashtags; or for more information, visit the Collective Shout website.

You look so good in blood! Violence is like, so hot right now