In Feb 2017 Fifty Shades Darker, the second installment in the Fifty Shades Trilogy is due to be released in cinemas, just in time for Valentines Day.

We've prepared responses to some of the most common arguments we heard in support of the book series and film. 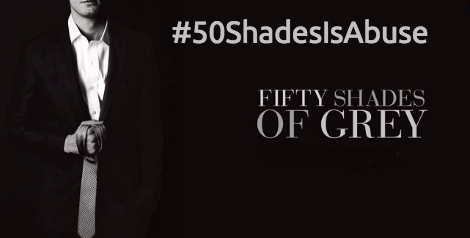 Many Fifty Shades fans argue that it is just a book/film, a work of fiction, and as such the eroticized representations of violence against women have no power to influence thinking, attitudes or beliefs.

However, an analysis of the novel found sexual violence and emotional abuse were pervasive and the popular book series had the power to influence attitudes and beliefs surrounding intimate partner violence. The authors argued that “individuals regularly alter their real world beliefs and attitudes in response to fictional communication” and “stories are especially influential when readers become drawn into them and cognitive resources, emotions, and mental imagery faculties are engaged.”

The authors noted in their conclusion "our analysis adds to a growing body of literature noting dangerous violence standards being perpetuated in popular culture." Read more

The popularity of Fifty Shades’ means it has even greater potential to perpetuate and reinforce damaging attitudes about abusive relationships.

Throughout history many there are many examples of oppression, violence and injustice that were popular or socially accepted in their time, but are now strongly rejected. Read more

"But he loves her so much!"

To accept this argument would be to believe that stalking, possessiveness, manipulation, jealousy, control and other elements of intimate partner violence are based in love - that abusive men hurt their female partners because they ‘love them so much’.

Perpetrators themselves like to say they acted out of love. This is false. Read more

"It's not domestic violence- he never hits her!"

There are incidents where Christian does hit Ana, such as when he slaps her during sex, when he puts her over his knee and spanks her backside as punishment for perceived acts of defiance (such as rolling her eyes.) When violence is sexualized it is made to be invisible, and we are supposed to accept it without question.

It is a myth that domestic violence is limited to hitting and punching. Abusive behaviours include making threats, manipulation, intimidation, uncontrollable anger, possessiveness, controlling, withholding money, isolation, humiliation, stalking and sexual violence.  Grey’s treatment of Anastasia outside of the bedroom is just as much a cause for concern.

"But it's not an abusive relationship!"

Some fans of the book continue to suggest those critical of the themes and messages throughout need to ‘get their facts straight’. The assertion that domestic violence workers and psychologists analysing the novel ‘just don’t understand’ defies logic.

It would appear filmmakers took deliberate steps to portray the relationship as more consensual and less abusive, adding in romantic scenes that did not appear in the book, and leaving out some of the more extreme scenes from the books.

"If she didn't like it she could just leave"

This is a common myth in domestic violence situations- that if a battered woman does not leave her violent male partner, it is assumed she consents to abuse and violence or that she secretly likes it.

Many abused women experience confusion and may not recognize what has been done to them as abuse. Often they still love their partner or believe he will change. Others believe they must have contributed to the abuse or that it is their fault. Many others want to leave but live in fear of their abuser, believing he will kill them if they do, and tragically, many domestic violence murders occur after the woman has already left and the man has lost control of her.

The notion that it is women who are victimized who should change rather than the men who terrorise and abuse them is misguided and an example of victim blaming.

There are occasions in the books and at the end of the film, where Ana does not like Christian’s treatment of her, and she expresses this.

"But he was abused himself"

Many abusers have histories of being victims themselves. This does not justify perpetuating violence or abuse against another person. There are many more survivors of abuse that never harm another person.

"But the violence is consensual"

"Anastasia has one reason only to want to sign this: It’s because she wants Christian, and hopes that this is the way to have him…Indeed, Anastasia makes clear on countless occasions that she wants to have a “normal” relationship where they go on dates and sleep in the same bed, something he refuses to do; and Christian repeatedly tells her that the only way to be with him is to sign the contract agreeing to things she doesn’t want to do.” -Salon article “50 Shades” of coercive sex: The movie is even worse than the book.

The idea that Anastasia simply enjoys violent sex, or that she is embracing her sexuality, is based on the false assertion that she is calling the shots, or that she is anything other than a naïve, virginal young woman complying with Christian’s demands. As Gail Dines argues, "Missing from this hype, of course, is a detailed discussion of how the books eroticise violence against women and render invisible the predatory tactics the “hero” uses to groom, seduce and abuse a much younger woman.”

Kourtney Mitchell, author of There Are No Grey Areas In Ending Violence Against Women, writes, "We have to ask ourselves the obvious question: what does it mean to inundate the dominant culture with the elements of violence, sell it to us as desirable under the capitalist paradigm, and still claim to be contributing to the empowerment of women?”

"But he changes in the end"

This is perhaps one of the most dangerous and misleading messages from the book series- that if victims of violence and abuse stick around, they can ‘heal’ the abuser if they love them enough. This notion is not based in fact, as in reality the violence tends to escalate over time. As sociologist Gail Dines said, “Battered women's shelters and graveyards are full of women who had the misfortune to meet a Christian Grey.”

"You're judging other people's sex lives"

This intention of this campaign is critiquing the dominant message in the books and film that violence is sexy and desirable, that stalking, emotional abuse and sexual violence are representative of love and romance rather than intimate partner abuse.

"You are just prudes who hate sex"

This is what defenders of 50 Shades of Grey have said to those who object to the series and its message. It is the same thing we have heard over and over from men defending pornography.

Sexual exploitation, pornography, violence and abuse are not the same as sex.

Women don’t have to actively participate in media that romanticises and normalises violence against women, but it is increasingly difficult to avoid the film or its message.

The film has been aggressively marketed via a number of advertising mediums, including outdoor advertising and billions have been poured into merchandising the brand. Charity organisations including a preschool and anti violence organisation were set to use the film as a fundraiser before cancelling at the last minute. It has also been reported that a middle school in the US is investigating how their school students were given a 50 Shades 'find a word' puzzle featuring explicit sexual terms from the story.

Fifty Shades is a massively popular cultural phenomenon, perpetuating and reinforcing harmful attitudes about violence against women. Women cannot simply opt out of a culture that exploits or harms them.

The argument ‘if you don’t like the film don’t watch it’ makes as much sense as arguing "if you don't like air pollution don't breathe."

Raising awareness of the film and domestic violence is not censorship, nor is calling for a boycott.

It is important to expose the harmful messages and intimate partner violence themes in Fifty Shades of Grey, particularly in a culture where one woman is murdered every week by her current or former partner.

We are calling on the community to see Fifty Shades for what it is, a film glorifying abuse of women, and asking them to consider whether this is something they want to financially support.

As individuals committed to upholding the dignity and rights of women, we refuse to support a film that romanticises intimate partner violence and portrays the abuse of women as sexy, harmless fun. We will not participate in excusing, downplaying or accepting men's violence against women.

Please join us and pledge to boycott the film Fifty Shades Darker.