Posted by Caitlin Roper 5226sc on 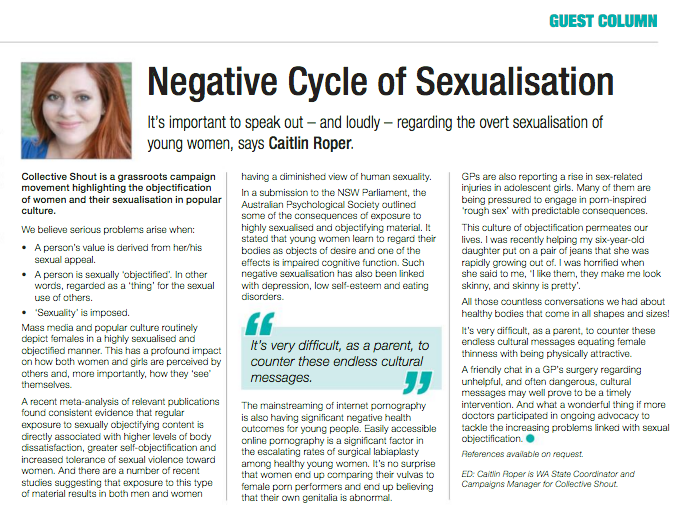 Collective Shout is a grassroots campaigning movement fighting the objectification of women and the sexualisation of girls in media, advertising and popular culture. In its 2007 Task Force into the Sexualisation of Girls, the American Psychological Association defined sexualisation (as opposed to healthy sexuality) as follows:

Media and popular culture routinely depicts women and girls in highly sexualized and objectified ways, which has an impact on how women and girls are perceived and how they perceive themselves. A meta-analysis of 109 publications containing 135 studies found consistent evidence that “regular…exposure to [sexually objectifying] content are directly associated with a range of consequences, including higher levels of body dissatisfaction, greater self-objectification, greater support of sexist beliefs and of adversarial sexual beliefs, and greater tolerance of sexual violence toward women. Moreover, experimental exposure to this content leads both women and men to have a diminished view of women’s competence, morality, and humanity.”

In its submission to the NSW sexualisation earlier this year, the Australian Psychological Society outlined some of the other impacts from ongoing exposure to sexualising and objectifying material, including ‘self objectification’, where girls learn to view and evaluate their bodies as objects of others’ desire. This internalising of highly sexualised ideals had negative impacts on cognitive functioning, ability to concentrate and focus their attention. Sexualisation has also been linked with depression, low self-esteem and eating disorders.

General Practitioners are also reporting a rise in sex related injuries in adolescent girls, injuries they attribute to rough, porn-inspired sex acts that girls may not enjoy but feel pressured to participate in.

I can personally testify to the powerful impact a culture of objectification can have on young people. Recently my six year old daughter asked me for help to put her jeans on- they were getting a bit small and harder for her to get into. As I assisted her, I casually mentioned that these pants were a bit small for her now and suggested she choose another pair. She exclaimed, “But these ones make me look skinny!” Trying to hide the horror I felt, I calmly asked her why she wanted to look skinny. She shrugged and said that skinny was ‘pretty’.

I recalled the countless conversations we had had together about healthy bodies that come in different shapes and sizes. Conversations about eating good foods to nourish our bodies and moving our bodies because it helps us feel good. Despite an ongoing focus on healthful behaviours rather than appearance, focusing on what our bodies can do rather than how they look, the cultural messages about the importance of female thinness and physical attractiveness are hard to counter as a parent alone.

Medical professionals can play a significant role in identifying the role harmful cultural norms and messages play in the ill health of young people especially, address these factors in clinical settings and joining current advocacy efforts to tackle the problem to help protect the health and well-being of the next generation.

A slightly modified version of this piece was published as a Guest Column in Medical Forum WA magazine.

Collective Shout Submission to Senate and Environment Communications References Committee, Harms being done to Australian children through access to pornography on the internet