The Fremantle Heritage Festival is an annual community event hosted by the City of Fremantle. The event:

"...showcases the stories that make up the rich tapestry of Fremantle both in the distant past and our childhoods. The festival honours and explores the settlement and early days of Fremantle, while revelling in the nostalgia of not-so-distant memories."

Unfortunately sexploitation is not at all a distant memory, it is an ongoing social problem. This is how the Fremantle Heritage Festival Facebook page promoted the event yesterday (blurring ours): 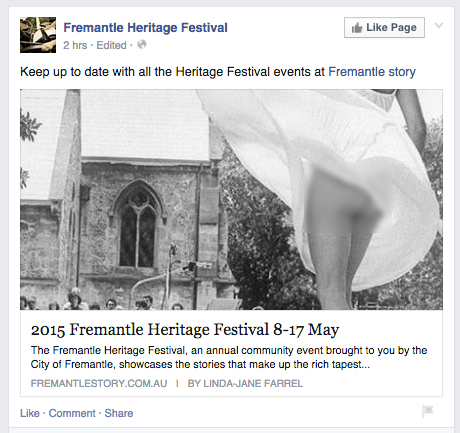 Collective Shout supporter Penny posted a response to the advertisement, asking why a woman’s bottom was being used to promote the event.

“This image was taken at a heritage festival event and was used to promote the festival this year.”

It was not explained why this photograph was taken or why it was now being used to promote the festival. It wasn’t even clear whether the woman had consented to the photo.

The image sexually objectifies women by focussing on her bare bottom for others sexual interest.

The style of the image - "upskirt" - puts the viewer in the position of 'voyeur.'  The voyeuristic criminal behaviour of 'upskirting' or 'downblousing' involves filming another persons private parts without their knowledge. Those engaging in this behaviour can be charged with a criminal offence. Victims are most often women and girls and their rights are often violated over and over again when their images are shared online.

Along with posting comments on the events Facebook page, Penny sent tweets to the City of Fremantle and sent an email to the Mayor. Within a couple of hours the Mayor responded: 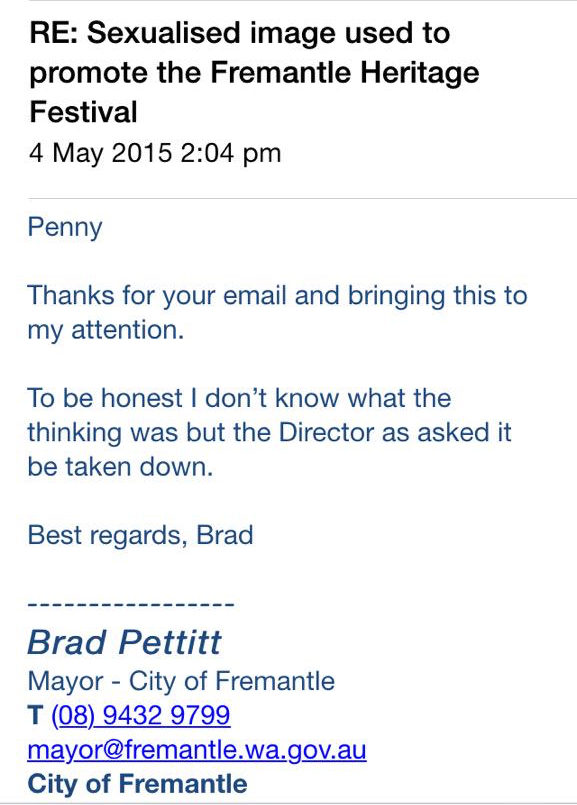 It's great to see a quick response from Mayor Brad Pettitt with no excuses and immediate action taken.

Thanks to Penny for raising this issue, its a great example to show that speaking out does make a difference.