A number of supporters have contacted us about General Pants 'Wet Dreams' ad campaign spotted in shop front windows of various stores around the country.

Women in bikinis are posed lying down in a bathtub, 'sultry' facial expressions with arms raised to hold back their hair. The words "Wet Dreams" in the style of pink neon lighting are written over the top of the image. 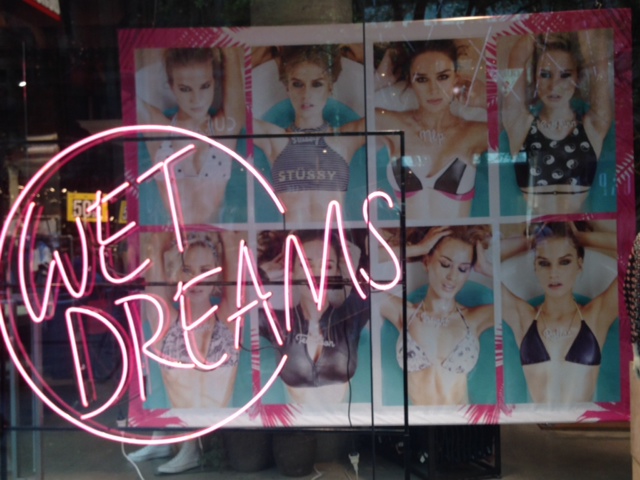 Here are some of the comments we received on social media:

"once again the sexist advertising is entirely for the male gaze & male fantasy. And of young girls of course. Such bad form General Pants."

"I thought it was a photo from a red light district!"

General Pants is a serial offender with regards to pornified advertising.

General Pants have responded to a few complainants by asking for contact details to discuss the matter over the phone. 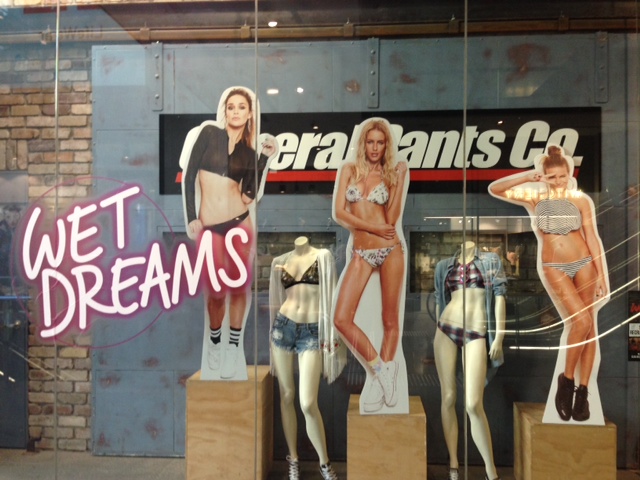 A number of people have let us know that they have made a complaint to the Ad Standard Board. We encouraged people to do this and to also submit complaints directly to General Pants.

One of our supporters, Jas, recently told us that General Pants had responded to her complaint by stating the ad campaign had been taken down. It is unclear as to whether the campaign was removed due to complaints or simply because it was at the end of the ad campaign cycle.

Regardless, it is still a good outcome and very important for us to keep making our voices heard.

What did the Ad Standards Board say?

For those of us familiar with the Advertising Standards Board, it was no surprise to see that they had dismissed the complaints.

Why? The Ad Standards Board is a system of self-regulation that exists to serve the interests of the advertising industry. But here's what they had to say about this particular ad:

According to the board:

"...the women are not inappropriately exposed and they are not posed in a manner that is sexualised.

“…however…the reference to “wet dreams” is linked primarily to the competition to win an overseas trip to Dubai.

You can read the full determination here.

This is another example of how ad industry self-regulation doesn't work. You can read about other ASB fails here.

Where to from here?

We will continue calling for ad industry self-regulation to be replaced with an independent regulation system, but we can't do it without your help.

Here's what we need you to do:

Keep submitting complaints to the Advertising Standards Board about sexual objectification in advertising. The board must record and respond to your complaint. Even if the board dismisses your complaint - such as what has happened with this ad campaign - your complaint will still be on record.

If possible, take a photo of the advertisement and send it to us along with details of the complaint you've made to the ASB.

This is information we can then use to convince our Members of Parliament that self-regulation doesn't work.

Find out who your Federal MP is by typing your postcode into the search bar at this link: http://www.aph.gov.au/Senators_and_Members/Members

Contact your State Member of Parliament. If you don't know who your local MP is, click the following links to find more details.

Feel free to get in touch with us if you need any help locating your Federal or State MPs. 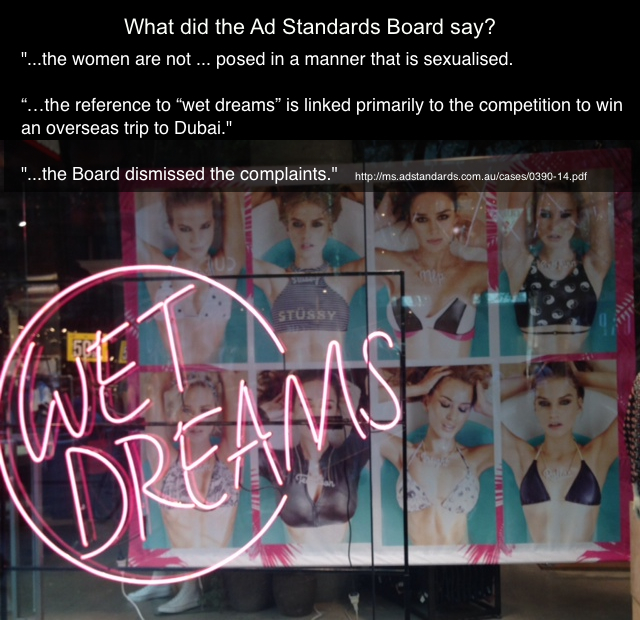