Nikki Gemmell has form on the issue – readers may recall I ran an earlier piece by Nikki titled ‘Boner Garage’: girls, my heart breaks for you in May 2015. 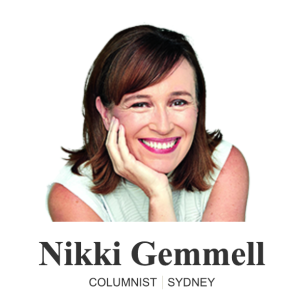 I really don’t want to talk about this. Squeamish readers may want to turn away now. But it’s being normalised among our teenagers and it scares the hell out of me. Recently it was reported that a 16-year-old girl was forced to get a colostomy bag after being injured during rough group sex, and she’ll have to wear it for the rest of her life. Sixteen. Such a tender, transcendent introduction to the world of sexual experience, eh?

Or wasn’t. Meagan Tyler is a senior lecturer at RMIT University, and her research is finding that pornographers are making their videos increasingly violent: “There’s no debate that it’s happened,” she explains, dispiritingly. “That the kind of things that were seen as pushing the boundaries in the late 1990s have become very much normal and mainstream.”

As a woman, it can feel degrading. It’s all about the ethics of passivity and submission. The Australian Institute of Family Studies has released a discussion paper about the way pornography reinforces the stereotype of the active sexual male and the passive female receptacle. It links to research showing that boys who view pornography frequently are more likely to see women as sex objects; to be more sexually aggressive.

Mature couples can make their own decisions. This kind of sex is for experienced couples, for the time beyond regular sex when you’re pushing the boundaries, deliciously, in a safe and warm-hearted environment where it’s carried out in a sensitive and generous way. It’s not an experience for beginners yet increasingly, in our porn-saturated world, it is. That poor high school girl — most likely a pleaser — with her new colostomy bag. “Rough group sex” implies, depressingly, an utter absence of tenderness, which the best sex, of course, is saturated with.

After your first sexual experience you hope to feel newly minted, energised; inducted into a splendid new club. Not reduced. Looking at someone face-to-face as they climax feels like a gift of extreme intimacy — you see who they really are. It’s a deeply private, tender moment of transgression and trust and sharing. Which is what we want for our teenagers, too; for them most of all perhaps.

Nikki Gemmell is a bestselling author of thirteen works of fiction and five non-fiction books. Her work has received international critical acclaim and been translated into many languages. Nikki is a columnist for the Weekend Australian Magazine. Published February 16, 2019. Reprinted with permission of the author.

Harm being done to Australian children through access to pornography on the Internet Submission to Senate Environment and Communications References Committee, 2015