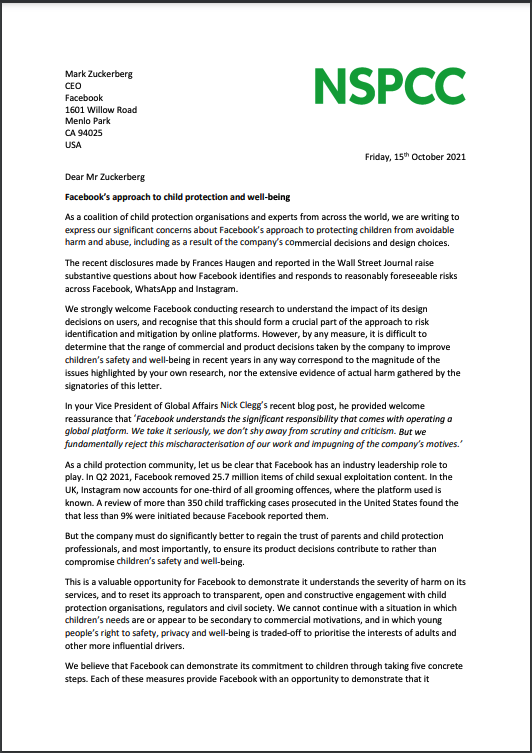 The group led by UK's National Society for the Prevention of Cruelty to Children (NSPCC) spelled out five steps for Facebook to take to demonstrate its commitment to children's safety and wellbeing:

As reported in the Guardian:

The letter has been sent to Zuckerberg in the wake of revelations from Facebook whistleblower Frances Haugen, who has accused the company of a lax approach to safety in testimony to US senators and a number of document leaks that formed the backbone of a series of damning articles in the Wall Street Journal.

One of the most damaging leaks was internal research at Instagram that showed the app’s impact on teen wellbeing, including one slide showing that 30% of teen girls felt Instagram made dissatisfaction with their body worse.

Echoing Haugen’s claim that the company puts profit before people, the group letter states: “We cannot continue with a situation in which children’s needs are or appear to be secondary to commercial motivations, and in which young people’s right to safety, privacy and wellbeing is traded-off to prioritise the interests of adults and other more influential drivers.”

“The company must do significantly better to regain the trust of parents and child protection professionals, and most importantly, to ensure its product decisions contribute to rather than compromise children’s safety and wellbeing."

You can read the letter here.

Read about our 2-year investigation + joint global #WakeUpInstagram campaign calling on Facebook to stop the sexualisation, fetishisation, harassment and exploitation of minors on Instagram here.

Facebook’s recently rebranded parent company Meta has announced it won’t proceed with plans to roll out end-to-end encryption (E2EE) across its messaging platforms next year.

Facebook’s E2EE plans - due for execution in 2022 - had been widely criticised for enabling child abusers to share child sexual exploitation content in secret.

The National Center for Missing and Exploited Children (US) estimated encrypting messaging on the platforms would result in a 70% reduction in detection and reporting of online child exploitation and abuse.

Over the past year we joined with law enforcement, child protection advocacy groups and Big Tech watchdogs in calling on Facebook to dump its E2EE plans. We're pleased to see the rollout on hold - now we'd like to see Meta abandon the plan altogether.