An Australian dancewear label is under fire for sharing images of young dancers photographed in sexualized poses. But the controversial photos are also sparking a larger discussion about parents sharing seemingly innocent images of children online, and how these pictures can be misused by strangers.

Women's advocacy group Collective Shout launched an investigation into Frilledneck Fashion after the organization was alerted to images of young girls, many who were pre-pubescent, in deliberately sexualized poses and outfits on the brand’s Instagram account.

In one of the controversial images, a young dancer lies with her back arched in an alleyway, her hands above her head and her knees bent.

The article includes comment from Canadian Centre for Child protection about the risk of sharing photos of children online.

Arnason said parents must consider how they're sharing photos of their children, and have a conversation with family members and friends about ground rules for reposting those photos.

"You don't control other people's (privacy) settings," she noted.

Arnason said CyberTip.ca receives more than 2,000 complaints a year about images of "sexualized child modelling", which she says are "rampant" online.

"It's important for people to be readily aware that among the offending community these images are of significant interest."

As for some of the images on the Frilledneck Fashion website, in particular the alleyway shot, Arnason said, "I don't know what person seeing that image wouldn't think that was a sexualized shot."

She continued: "We need the public more engaged in this and more outraged over things like this, because it really isn't acceptable to be sexualizing children."

Click here to read the full article at CTV news

In response to this campaign, a couple of comments suggested that providing information about the risks of photo sharing online to parents is inappropriate as it is a form of victim blaming. One comment said that instead of 'yelling' at parents, we should focus on holding men who are stealing the images for pornographic websites accountable.

Nobody who has researched this issue and passed on this information does so with the intention of berating parents or blaming them if they've shared photos of their children online. Parents whose photos have been stolen by sexual predators are victims of this crime too.

We asked Cyber Safety expert Susan McLean about educating parents on the internet and catching sexual predators. This is what she had to say. 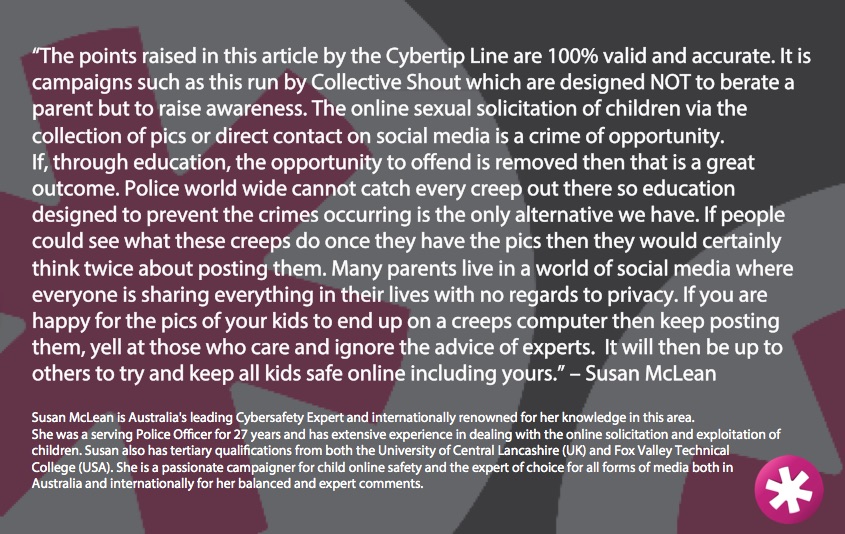