We are pleased to have joined American feminist activist Gloria Steinem along with over 200 survivors of trafficking, prostitution and pornography, women’s and human rights advocates and front line service providers around the world as a signatory to a joint letter to Victorian Premier Daniel Andrews condemning the Victorian Government’s decision to fully decriminalise the sex trade. 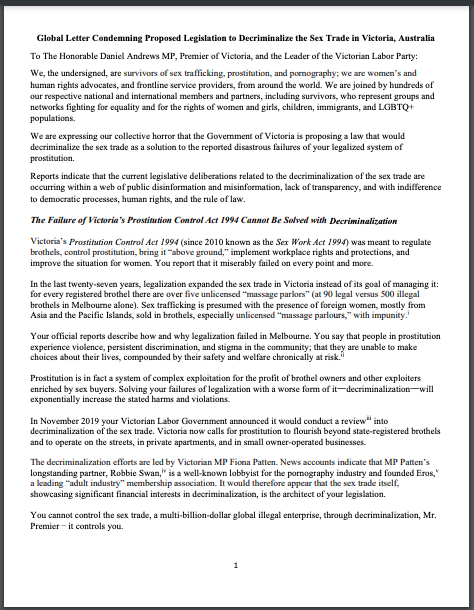 From Coalition Against Trafficking in Women Australia’s media release:

“Prostitution is in fact a system of complex exploitation for the profit of brothel owners and other exploiters enriched by sex buyers. Solving your failures of legalization with a worse form of it―decriminalization―will exponentially increase the stated harms and violations.”

The letter challenges the Government’s right: “to set apart and aside a class of women, primarily of colour and deemed unworthy of equality, for the sex trade.”

The letter calls on the Premier to: “address the harmful cultural practice of bestowing men a customary right to purchase sexual acts with human beings who would never, but for myriad forms of coercion and an absence of choice, engage in sexual acts with them.”

The letter urges the Victorian Government to stand with survivors – rather than sex industry profiteers – and consider the Nordic/Equality model: “a progressive law that solely decriminalizes people bought and sold in prostitution, provides them with services, including exit strategies, while holding sex buyers and other perpetrators accountable.”

You can read the letter here.

The letter will remain open for signatures – add your name here.

Share your views on the Victorian Government’s online survey here (due by 5pm Friday 27 August).