We have long pointed out that ad industry self-regulation doesn’t work and that the Ad Standards Panel is conflicted in its role, frequently making decisions that benefit the advertiser rather than the community.

The Ad Standards Panel determination for Honey Birdette’s “Kukuro” bondage ad is a particularly egregious example of this. Ad Standards has determined that a photograph of a woman's bare buttock bound in straps with buckles, metal loops and a snap hook connected to handcuffs does not breach the ad industry code of ethics. These advertisements appeared in shopping mall windows around Australia. 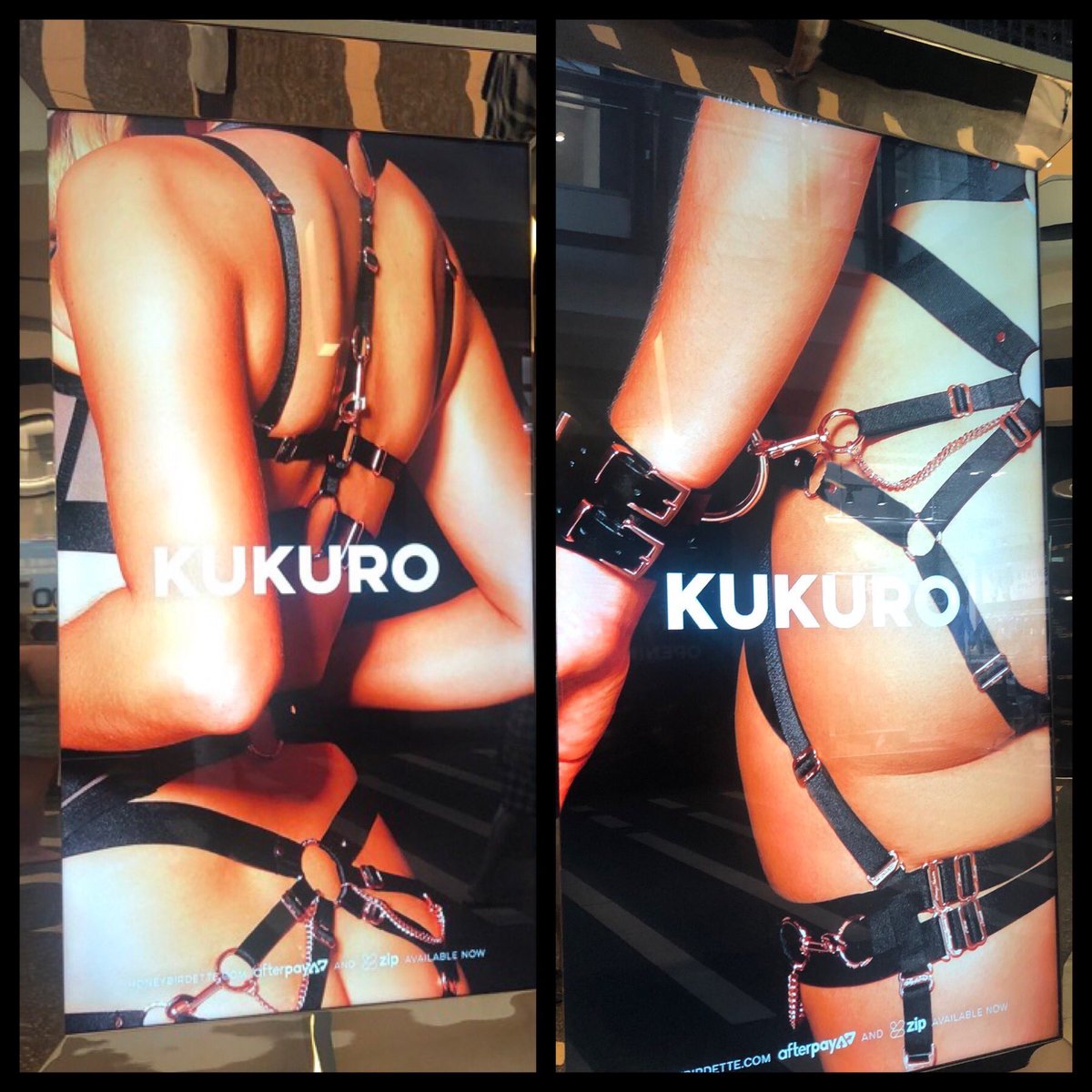 The determination begins with Ad Standards describing the advertisement:

This poster advertisement features a close-up image of one side of a woman's lower back, arm, buttock and upper thigh. The woman is wearing black strappy lingerie with rose gold details, and a wrist strap which is linked to her lingerie. The word Kukuro is placed over the top of the image.

Honey Birdette spruiks the product to "bondage babes" on its website:

Bondage babes, come hither… It’s time to buckle up and get into the raciest positions possible with Kukuro. Featuring high-shine foiled satin and rose gold bondage accessories that pair perfectly with any bondage piece to be blissfully bound for the bedroom.

A sample of the complaint shows that the complainant's assessment of the ad aligns with the advertiser's description of their products:

Advertising using graphic, pornified bondage themes popularised by the sex industry in the public space where children are present is entirely unacceptable.

In its determination the panel considered whether the ad might violate Section 2.2 in the code:

Advertising or marketing communications should not employ sexual appeal in a manner which is exploitative or degrading of any individual or group of people.

The panel then referred to the practice note provided by the AANA as to how to interpret this section of the code, specifically "guidance on the meaning of the terms exploitative and degrading":

Exploitative - (a) taking advantage of the sexual appeal of a person, or group of people, by depicting them as objects or commodities; or (b) focussing on their body parts where this bears no direct relevance to the product or service being advertised. Degrading, lowering in character or quality a person or group of people.

The AANA Practice Note will never be able to provide any guidance that does not favour the sex industry when the qualifier "bears no direct relevance to the product or service being advertised" is applied.

The panel then noted that the advertisement used sex appeal. Referring to the practice note, Ad Standards asserted that close up shots of the woman’s body parts could not be exploitative as Honey Birdette’s intention was to focus on the close up detail of the product.

It is insulting to the the intelligence of any rational person to suggest that complaints about this advertisement might be due to the impression that “the woman might be the product for sale.”

Ad Standards assertion that the woman is not depicted as an object or commodity due to what they claim is the intention of the advertiser is highly suspect given this is yet another complaint that Honey Birdette has not responded to. As Ad Standards noted "The advertiser did not respond" so how can they know the intent of an advertiser who has made no such claim about "focussing on the detail of the product?"

The idea that sexual objectification and its consequences cease to exist due to the intent of the advertiser has no basis in reality and goes against decades of research:

A total of 109 publications that contained 135 studies were reviewed. The findings provided consistent evidence that both laboratory exposure and regular, everyday exposure to this content are directly associated with a range of consequences, including higher levels of body dissatisfaction, greater self-objectification, greater support of sexist beliefs and of adversarial sexual beliefs, and greater tolerance of sexual violence toward women. Moreover, experimental exposure to this content leads both women and men to have a diminished view of women’s competence, morality, and humanity. (L. Monique Ward (2016) Media and Sexualization: State of Empirical Research, 1995–2015, The Journal of Sex Research, 53:4-5, 560-577, DOI: 10.1080/00224499.2016.1142496)

The Panel then considered whether the advertisement used sexual appeal in a manner that was degrading of an individual or group of people. The determination then outlines a conflict between the ‘majority’ and ‘minority’ of the panel.

The determination then makes a number of assertions without evidence:

"...the depiction of one section of the woman's body was not dehumanising of the woman, rather the image highlighted the detail of the product which would not have been evident in a longer shot."

"...the woman's body parts were not the focus of the advertisement and that the woman was not lowered in character or quality because her entire body was not shown."

It is on this basis the panel decided “the advertisement did not employ sexual appeal in a manner which is exploitative or degrading of an individual and did not breach Section 2.2 of the Code.”

The panel then moved on to section 2.4 of the code, “Advertising or Marketing Communications shall treat sex, sexuality and nudity with sensitivity to the relevant audience.”

The Panel considered whether the advertisement contained sex, sexuality or nudity. The Panel noted the Practice Note for the Code states:

"Images which are not permitted are those which are highly sexually suggestive and inappropriate for the relevant audience. Explicit sexual depictions in marcomms, particularly where the depiction is not relevant to the product or service being advertised, are generally objectionable to the community and will offend Prevailing Community Standards."

Once again this is a practice note that provides a loophole for the sex industry to use explicit, sexualised imagery and to sexually objectify women as this will always be “relevant to the product or service advertised.” The code and its application by Ad Standards favours sex industry advertisers.

The panel then considered whether the images depicted sex. Using a definition of ‘sex’ from the Macquarie Dictionary -  "sexual intercourse; sexually stimulating or suggestive behaviour." (Macquarie Dictionary 2006) - the panel reached the stunning conclusion that a woman wearing bondage apparel is an image that ‘did not contain sex.’

“sexual activity involving such practices as the use of physical restraints, the granting and relinquishing of control, and the infliction of pain” 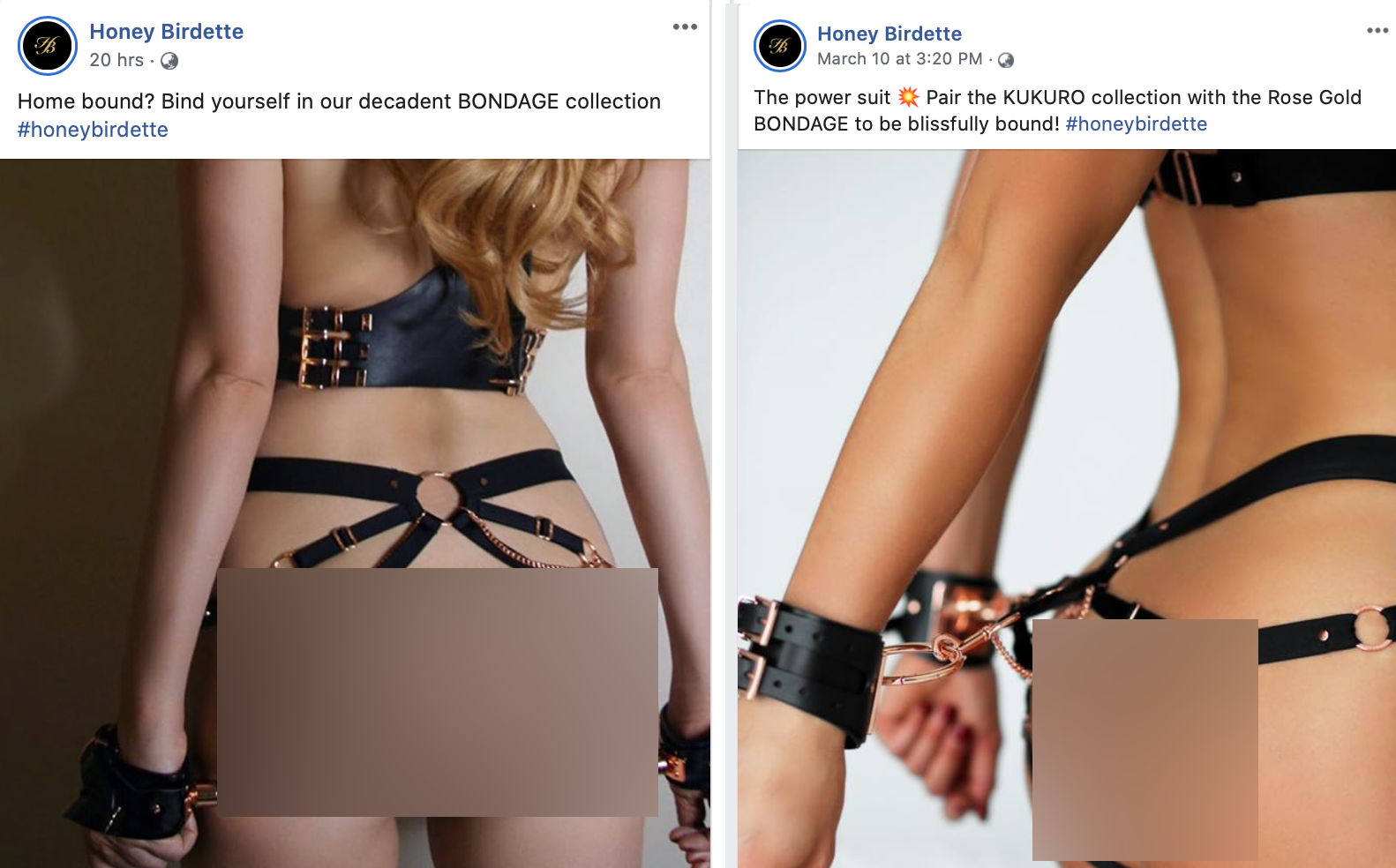 The panel noted that "the depiction of the woman wearing this style of lingerie was relevant to the product being promoted," that the ad depicts ‘sexuality’ and since “the advertisement was a close-up image of a woman's buttock, lower back, top of a leg and part of her arm" and a "large amount of the woman's buttock was exposed, covered only by a few thin straps” that the ad did contain "partial nudity."

The panel then considered whether these issues of nudity and sexuality were "treated with sensitivity to the relevant audience." According to the panel, the "relevant audience includes retail and service workers, people shopping in the Honey Birdette store and people who are not shopping at Honey Birdette but who are walking past the store, and that this last group would be broad and would include children.”

The determination again describes polarising views held by members of the panel. The minority who earlier described the close up image of a woman rendered powerless by restraints as 'dehumanising,' now adds the image is: 'highly sexualised and inappropriate for a broad audience."

The majority of the panel then launched into a defence of the advertisement. She's restrained by "strappy lingerie" via "wrist straps" chained to her lingerie, but the close up of the image is so Honey Birdette can "highlight the detail of the product available for purchase." She's "not depicted as pulling against the restraints." 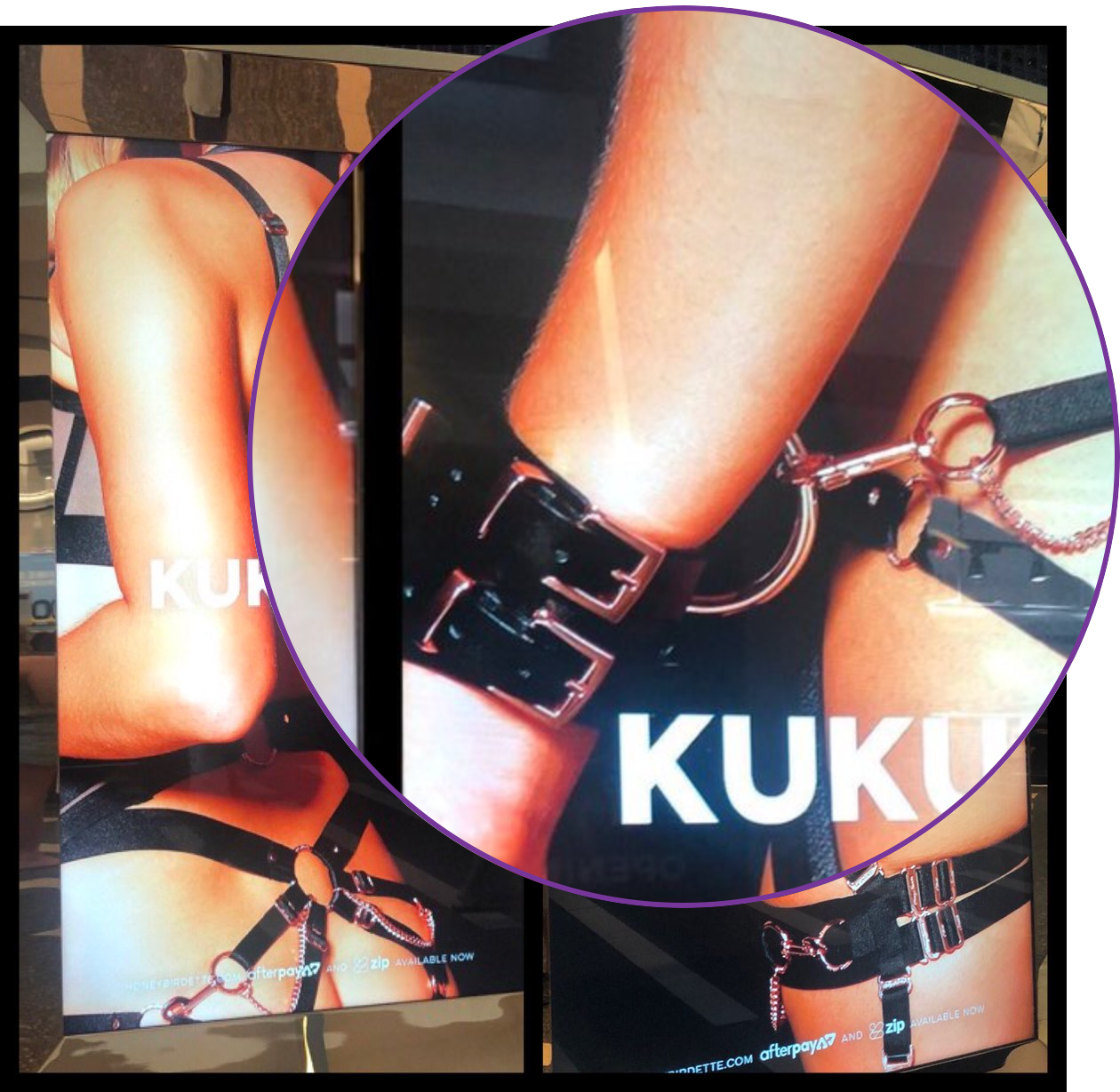 ["Not depicted as pulling against the restraints"]

The Panel noted that recent research into community perceptions found that the general community were more conservative than the Panel's determinations relating to sexual imagery and nudity in advertising, and that the level of concern over nudity and sexualised content in advertising has been increasing over the last 10 years (https://adstandards.com.au/sites/default/files/2007- 2017_community_perceptions_web.pdf).

The Panel determined the advertisement did treat sex, sexuality and nudity with sensitivity to the relevant broad audience and did not breach Section 2.4 of the Code.

Finding that the advertisement did not breach any other section of the Code, the Panel dismissed the complaint.

The argument made by the panel majority appears to rest on an assumption that Honey Birdette has a right to advertise bondage apparel in the public space and to sexually objectifying women - including close up shots of a woman's bare backside bound with elastic straps and buckles - and this is justified to "highlight the detail" of the product. 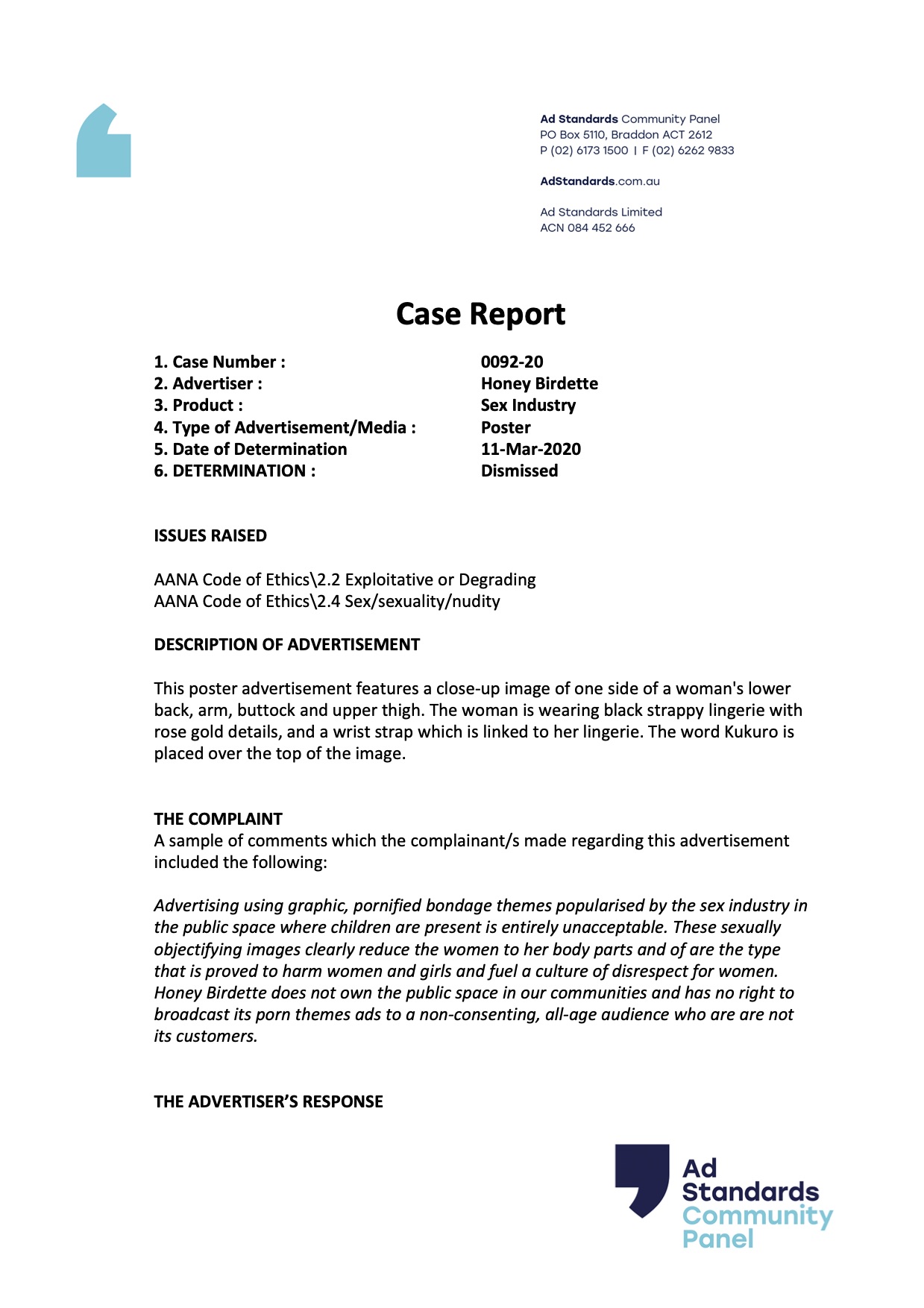