How The Media Continue To Traumatise Child-Exploitation Survivors

Posted by Jas Rawlinson 63sc on

Despite the advancements made in the battle to bring child sexual abuse to the forefront of public discussion, it seems society still has a long way to go when it comes to reporting on child exploitation with dignity and respect.

Take a moment to think over a recent article you’ve read on child sexual abuse—and now ask yourself, how did they describe the crime? Did the article report on a toddler being raped by an adult, or was it inferred that the offender ‘had sex with’ the child? Was the young trafficking victim reported as a ‘child prostitute,’ or a victim? Did the TV program you watched the other night report that an underage boy was taken advantage of, or that he was really ‘in a relationship’ with his abuser?

Take for example the case of little Tiahleigh Palmer—the 12 year old Queensland schoolgirl who was sexually abused by her 19 year old foster brother and then murdered by her Foster father in 2015. As horrific as this crime was however, it was the media’s reporting of Tiahleigh’s death that was truly disturbing.

As many came to see, not only did this young girl undergo the most horrific of trauma at the hands of two men who should have cared for her, but even in death, Tiahleigh continued to be degraded through media reports—many of which labeled her as being in a "toxic relationship,” as opposed to a victim of child rape. 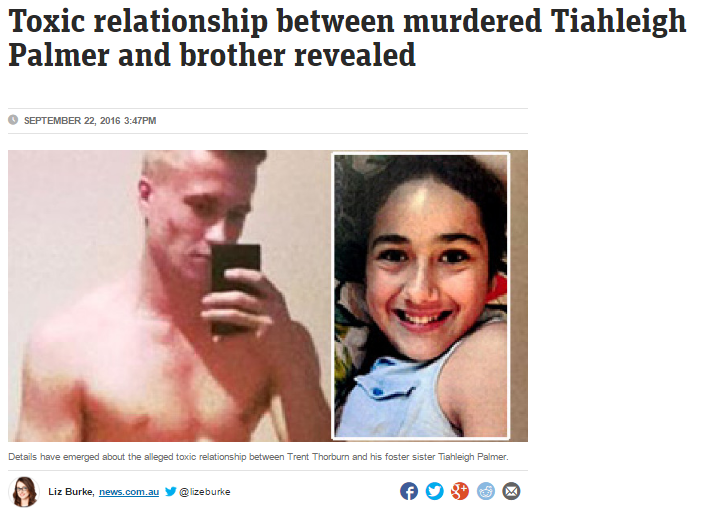 Although many journalists do not aim to distress or offend victims of child abuse with their reporting, the fact remains that such language remains insensitive, and degrading, to many survivors and their families.

Canadian author Carrie Bailee, who escaped to Australia aged 20 after surviving a childhood of sexual exploitation, says it’s vital that media and public figures are educated on the impact of trauma abuse and ethical reporting.

“The amount of courage it takes to report sexual abuse or assault and get to a space where you feel ready to come forward with your story is enormous, because the shame [experienced] becomes embedded long after the abuse stops,” she explains.

“My story was so badly handled by the media I now refuse all interviews. My entire childhood consisted of exploitation and objectivity, [and my story] was treated exactly the same way—with cheap, voyeuristic clickbait titles.

“The shame and anger I felt reading the first article printed about my life stays with me today.”

Collective Shout’s Caitlin Roper agrees, stating that the media have significant power in the shaping of cultural attitudes on sexual violence.

“When child sexual abuse is reported as ‘sex’ or a relationship between the two parties, rather than recognised for what it is—adults preying on children—this has significant influence on people’s attitudes to and understanding of these issues,” she says.

“It feeds into damaging myths that victims contribute in some way to their abuse, and only serves to keep the focus on those victims—unfairly opening their behaviour up to public scrutiny.”

In what has become a welcomed move, many prominent media figures—including feminist writer Jane Gilmore— have in recent years begun to speak out on the issue, taking to social media to ‘fix’ victim blaming statements. 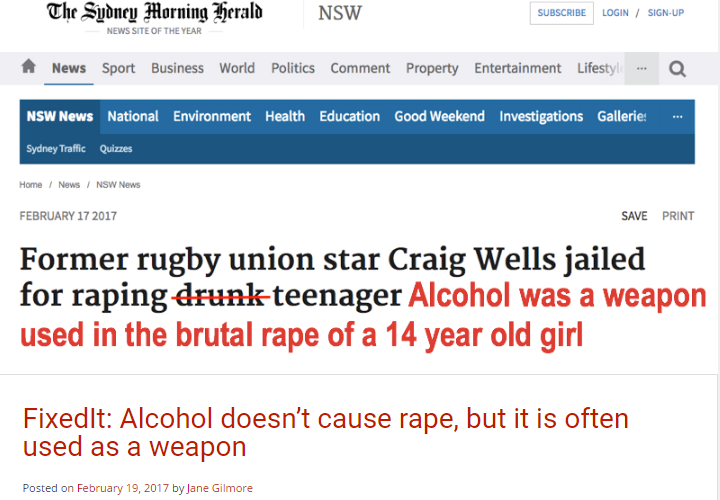 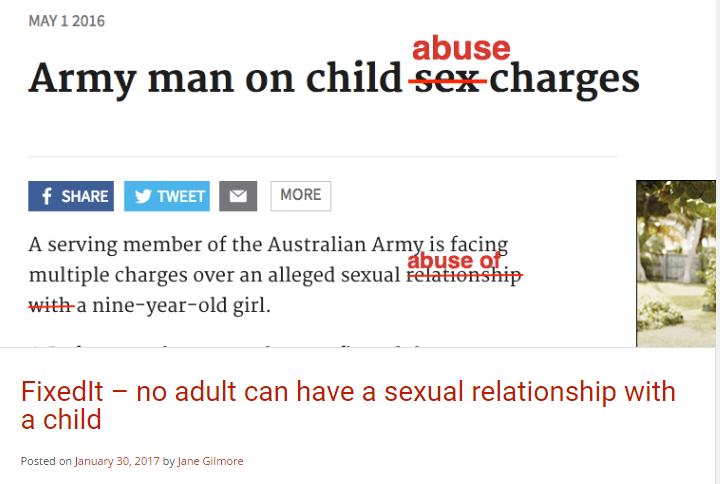 Although it has been heartening to see a gradual change in the way journalists discuss child sexual abuse victims, with terms such as ‘child pornography’ now more often referred to as ‘child exploitation material,’ many are still yet to take note.

Whether it be a case of media outlets preferring sensationalism over sensitivity, or unintentional ignorance, it's time for the media to do away with terms that diminish the abuse done to victims, and to begin reporting with dignity and sensitivity.

Jas Rawlinson is a Brisbane freelance journalist  and writer who is passionate about ending social injustices. You can read her blog, Thoughts from Jas or follow her on Facebook.

Collective Shout are joining forces with the Sydney Feminists to call upon the media to report responsibly when it comes to child sexual exploitation. If you see a media report that needs correcting, contact the editor and share this article. #LanguageMatters