“It’s just irony” seems to be the go-to defence for misogyny these days.

As a female activist for grassroots organisation Collective Shout, I hear it all the time.

After the global backlash to Kanye West's sexually violent Monster music video - which featured lingerie clad female corpses hanging from the ceilings, West in bed with two dead women and holding the decapitated head of another - West's team was quick to issue a disclaimer that is was "an art piece, and to be taken as such." This exempted the video from critical analysis, apparently. 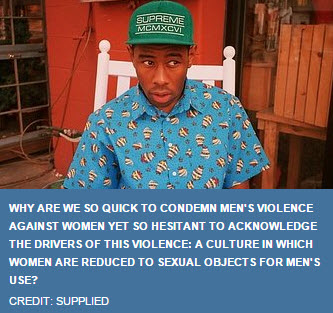 When we campaigned against Redfoo for his misogynistic Literally I Can't video, in which women were mocked, abused and told to "shut the f*ck up" for refusing the sexual advances of men at a party, Redfoo played the victim, claiming his "art" - there's that word again - was misunderstood.

When so-called "ute art" in Townsville depicted a chilling life-sized sticker image of an unconscious woman bound in the back of a ute next to a shovel, women who spoke out were accused of just not getting the joke.

Art. Satire. Irony. A joke. The premise is we just don't get it and are therefore not permitted to comment.

So it should come as no surprise that our campaign calling on the Immigration Minister Peter Dutton to revoke U.S. rapper Tyler the Creator's visa should attract the same predictable response. The real issue is uptight women who can't take a joke and who "need a good dick," rather than hate speech and incitement to violence against women.

Tyler fans argue his earlier work is satirical, that he is simply misunderstood, defamed, in fact, by feminists. His cult-like followers not only deny their idol's problematic real life treatment of women who dare to openly disagree with him, but even fuel it.

In 2011, Canadian recording artists Tegan and Sara published an open letter on their website, accusing Tyler of misogyny for his extremely sexually violent lyrics detailing rape, strangling, mutilating and chopping up women, stuffing their bodies into car boots, trapping them in his basement and raping their corpses. Tyler responded in a tweet:

In less than 140 characters, Tyler sent a clear message about women who dared challenge his authority.

The notion that women who speak out against male violence against women just need some "hard dick" is not new. It's a common way of deflecting from and trivializing our abuse. This method also intimidates many women into silent compliance. It's all the more sinister in this case, given the fact that Tegan and Sara are lesbian women, and the historical significance of so-called "corrective rape" - a horrific hate crime against lesbian women based on the belief that they can be "cured" of their sexual orientation through rape.

Tyler the Creator also responded to the Kanye West campaign on Twitter by naming two of the women involved, Sharon Haywood of Adios Barbie and Melinda Tankard Reist, Collective Shout co-founder, calling them "f*cking bitches" and inviting them to "suck [his] d*ck."

In 2013, Collective Shout ran a campaign calling on then Immigration Minister Brendan O'Connor to revoke Tyler the Creator's visa, arguing he was a controversial visa applicant who posed a danger to women. One of our young activists, Talitha Stone, wrote a tweet accusing Tyler of misogyny. Tyler shared the tweet with his 1.7 million followers, who took the bait and turned on her with an onslaught of abuse and rape threats. One Tyler fan threatened to "cut her tits off" and another - a 16 year old Melbourne private school boy - posted what he believed was her home address for the mob to do with what they would. (He was one street off). We were up half the night liaising with police trying to ensure Talitha's safety.

Talitha bravely attended Tyler's Sydney concert to report on it for us. She had no idea he would launch a vicious tirade of abuse against her, unaware she was in the audience filming. The crowd cheered as he called her a bitch, a whore, and a c**t, and dedicated his song "Bitch Suck D*ck" to her.

While our own Minister failed to act, we were heartened to learn the following year that New Zealand had denied Tyler entry, with his incitement of violence against Talitha being instrumental in its decision.

Two years on, Tyler is set to return to Australia for a series of all-ages (no age limits) concerts. We have called on Immigration Minister Peter Dutton to revoke his visa, arguing that Tyler meets the Department's definition of a Controversial Visa Applicant. This is a person:

Domestic violence is at epidemic proportions in Australia; women are being murdered by men at a rate of two per week. The groundswell is growing, with increasing pressure on the Government to take action to save women's lives. And yet, at the same time as extolling its National Plan of Action to Address Violence Against Women, the same Government rolls out the red carpet to recording artists who rap about raping and mutilating them for entertainment, and who have personal histories of inciting violence against women.

Why are we so quick to condemn men's violence against women yet so hesitant to acknowledge the drivers of this violence - the attitudes towards women, the ingrained sexism, a culture where women are routinely reduced to mere sexual objects for men's use and entertainment?

Tyler's own fans are helping us prove our point. We are being targeted with threats of violence and abuse from fans demonstrating a cult-like loyalty to their idol. These same fans claim that music that glorifies extreme violence has no impact on their attitudes towards women, and they remind us of this between threats of rape and calling us bitches, whores and worse.

Collective Shout co-founder Melinda Tankard Reist was tweeted a picture of herself with a pro-gang rape slogan, one of Tyler's lyrics, alongside the words, "What you gonna do now bitch you surrounded" (sic): 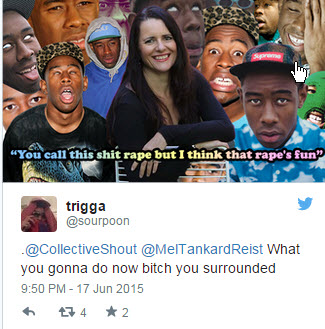 Our National Operations Manager, Coralie Alison, was similarly targeted by U.S. Talk Radio host Shane Powers, who called her a "feminazi," offered her "dick pics" and went on to make lewd comments about Immigration Minister Peter Dutton's wife. He seemed to enjoy intimidating a woman in this way, taking pleasure, with his male guests, from the thought of her violation and humiliation.

What are these men really saying when they tell us we need some d*ck? It sounds very close to "you need to be raped."

We predicted that Tyler's presence would incite discord into our community and pose a danger to women. It's already happening and he hasn't even stepped onto our shores. We need our Government to act on its promises to address violence against women and send a clear signal by not letting him.

Caitlin Roper is an activist and Campaigns Manager at Collective Shout: For a world free of sexploitation. You can add your name to a letter to the Immigration Minister urging him to deny a visa for Tyler the Creator.

Reprinted with permission from ABC Religion and Ethics